Significantly, but without much fanfare, an expanded definition of anti-Semitism entered the UK’s policy arena this April.

An article by Eric Pickles, former secretary of state for communities and local government, chair of the Conservative Friends of Israel and, since September 2015, UK special envoy for post-Holocaust issues, entitled ‘A definition of antisemitism’ introduced the government’s ‘Combating Anti-Semitism: a British best practice guide’ just before the announcement of a short Home Affairs Committee inquiry into anti-Semitism. And in it, anti-Semitism, traditionally defined simply as ‘hostility to or discrimination against Jews’ (Concise Oxford Dictionary) was replaced by an enormously long definition which not only includes attacks (physical or verbal) on Jewish people and community institutions but also ‘manifestations … target[ing] the state of Israel, conceived as a Jewish collectivity’, such as: ‘denying the Jewish people their right to self-determination, eg, by claiming that the existence of a State of Israel is a racist endeavour; applying double standards by requiring behaviour not expected or demanded of any other democratic nation … drawing comparisons of contemporary Israeli policy to that of the Nazis …’ 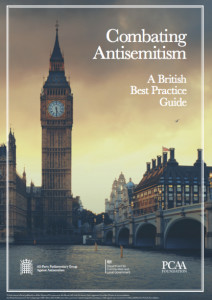 This conflation of anti-Israelism with anti-Semitism has a history stretching back to the 2001 Durban UN Conference Against Racism (of which more below) but what particularly concerns us here is the way that the definition of anti-Semitism is moving from deed to thought, from the objective to the subjective, from action to attitude.

Entering subjectivity into the debate

Much of anti-racist endeavour in the last twenty years has been over getting state agencies to recognise and outlaw racism. In that sense the 1999 Macpherson Report was a watershed in its recognition of institutional racism. The IRR has always maintained that it was important to distinguish between prejudices – the subjective – and the acting out of those prejudices – the objective – in discriminatory acts, physical attacks, government edicts etc. Penalising people for racist feelings or attitudes leads to thought-policing, whereas racist acts are measurable and therefore prosecutable before the law if needs be. And there are specific laws relating to incitement to race hatred, the committing of racially-motivated crimes, discrimination in provision of goods and services whether direct or indirect.

But, recently, emanating in part from cultural/identity studies in academia, a kind of victimology, a subjectivism is creeping into policy. Anything that is said or might be said that upsets people, gives hurt, merely makes them uncomfortable, is becoming equated with outright discrimination and liable for a prohibitive ban.

Offence is not racism

The conceptual flaw underlying Pickles’ definition is to equate racism with anything that gives offence. For while racism is offensive, not everything which gives offence is per se racist. Objections to cartoons depicting the Prophet Mohammed as a terrorist or paedophile are made not on grounds of their offensiveness – although they undoubtedly are – but on the grounds of the use of crude racist images to depict a religious minority as quintessentially evil. Although it might cause offence to some, it is no more inherently racist to attack Israel’s policies than it is to demand that ‘Rhodes must fall’ or to denounce US or British imperialism or these states’ complicity in torture. So Pickles’ definition not only appears to make an exception of Israel but also to close down on freedom of speech and of expression when it comes to defining what it is permissible to say about a particular country.

The working definition that Pickles has chosen for his best practice guide, which conflates particular criticisms of Israel with anti-Semitism is normally associated with what is known as ‘The New Anti-Semitism’ –which was gradually worked out by Jewish thinkers in the US following the attempt at the 2001 Durban Conference to equate Zionism with racism (which led to the US and Israeli delegations walking out). Proponents of this New Anti-Semitism thesis believe that anti-Zionism is often a coded form of anti-Semitism.

In 2003 the Institute for Jewish Policy Research in the UK published a book on this ‘coded’ anti-Semitism with nineteen contributors from the US and UK. [1] But not all the contributors were happy with the new thesis which went hand in hand with the idea that anti-Semitism was ipso facto on the rise in Europe. Antony Lerman, a former editor of Patterns of Prejudice felt that to overplay the current new anti-Semitism was to sully the memory of the millions who died in the Holocaust; lawyer and writer Anthony Julius felt that if anti-Semitism was on the rise, then the Jewish community was already strong enough to deal with such an upsurge.

But the most overt disquiet about the extended definition was to come from the EU Monitoring Centre for Racism and Xenophobia (EUMC) which later became the EU’s Fundamental Rights Agency (FRA). It originally commissioned research on anti-Semitism from which it drafted the new working definition of anti-Semitism for the EU, but, though it was placed on the EUMC website in 2005, it was not endorsed by all its country representatives and never adopted as an official definition by EU institutions. In fact this definition was withdrawn from the website in 2013 by the FRA, which explained it had never considered it valid. Ironically it is this disowned definition, travelling via a 2014 College of Policing report, which has been picked up and endorsed by Pickles.

This is a worrying development, probably related to bolstering the unifying ideology of the ‘coalition’ of states taking forward the War on Terror. Certainly it will be used mainly against Muslims.

Yes I agree with this, indeed I would go further. Anti-semitism is the new anti-racist of the right directly being used to clamp down on and restrict freedom of speech. It is imperialism’s attempt to curtail criticism, all in the name of anti-racism.

I don’t agree that the ‘new anti-Semitism’ began in 2001 at the Durban conference. The term was being used in the 1970’s and 1980’s by people like Abba Eban and it was Irwin Cotler who coined the term ‘The Jew among the nations’ to describe Israel.

The author is however spot on when describing the ‘new antiSemitism’ as subjective in the sense that it describes thought and political attitudes though it does apply to actions e.g. boycotts, the traditional weapon of the oppressed are now redefined as anti-Semitic.

The pro-Israel lobby in the UK and to different degrees elsewhere, are shifting their emphasis from defending Israel’s policies and conduct. The aggressive expansion of settlements, the outpouring of anti-Arab racism by leading Israeli politicians, the arbitrary killings and house demolitions inflicted on the Palestinians, etc. have made Israel near impossible to defend when addressing the Western political mainstream. By contrast making out that opposition to Israel and Zionism is an attack on Jews makes Israel’s defense still serviceable for manipulating the liberal conscience. Hence, as Frances Webber points out, the none too subtle attempt to expand the scope of what constitutes antisemitism. But the likes of Eric Pickles aim not only to silence criticism of Israel but to use the Jewish community in the ideological manoeuvre to isolate and stigmatise Muslims as extremists, racists and backward. The leaders of the Union of Jewish Students in attacking the newly elected NUS president, Malia Bouattia, have signaled that they are willing to be useful idiots for Islamophobia.

Mohammed was an individual not a race. I can’t see how any characterisation of Muhammed which doesn’t directly make reference to his race could be defined as racist. He was an individual who reputedly wrote and preached some pretty wacky ideas claiming that they were given to him by God. A bit unlikely if you ask me. I have no problem with some ‘like of Brain’ type piss take out of him.

If even 10% of ‘left liberals’ were genuine, they would question the economic roots of immigration, racism, anti Semitism, class discrimination etc. Most metropolitan liberals are part of some kind of hivemind, and few of them seem to have anything original or honest to say, or reflect any real independence of thought.

Anti Semitism is also becoming the acceptable prejudice of the ‘liberal left’ metropolitanistas as well, along with their long cherished hatred and contempt for white working class people as well.

Fantastic post however , I was wanting to know if
you could write a litte more on this subject?
I’d be very grateful if you could elaborate a little bit more.
Cheers!