A rose for the warrior.

We were greatly saddened to hear of the death of Race & Class editorial working committee member Barbara Harlow on 28 January. A much-loved colleague, Barbara, professor of English Literature at the University of Texas, dedicated her life to the progressive causes of our times, in most recent years prioritising the struggle for a free Palestine. But she did so in a way that earthed political causes in the travails of human relationships. 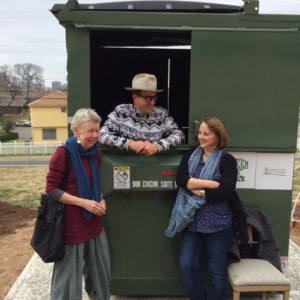 Barbara, who was born in Cleveland, Ohio and studied at the State University of New York, completed her PhD on Marcel Proust in 1977. But, with the publication of her first book Resistance Literature in 1987, Barbara let it be known that she had moved out of the temple of high theory. The literary stream she would swim in from now on would be refreshed by the poets and writers of national liberation movements and resistance struggles in Africa, Latin America and the Middle East. Many more books and edited collections were to follow, notably Imperialism and Orientalism: a documentary sourcebook and Archives of Empire and After Lives: legacies of revolutionary writing. Political assassination of revolutionary writers emerged as a unifying theme in her writings and she was currently working on a biography of anti-apartheid activist Ruth First. 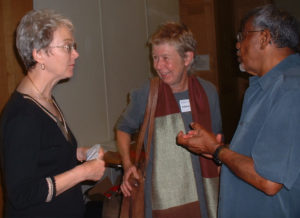 Barbara Harlow (centre) with Hazel Waters and A. Sivanandan at an event to celebrate Race & Class in 2004

Barbara had an instinctive feel for people, all sorts of people (as well as cats) – and hospitality towards others, as I saw for myself during a trip to the University of Texas, was a priority. A tiny slip of a woman, Barbara hid her fragile physique under layers and layers of ballooning clothes. Her soft voice and gentle demeanour belied an enduring and resolute toughness. Like her beloved poets , Ghassan Kanafani and Mahmoud Darwish, she rejected the ‘roses that spring from a dictionary or diwan’, gathering to her heart the ‘roses’ that ‘grow over the wounds of the warrior’. In an America characterised by the racism, violence and coarseness of Trump, Barbara’s life reminds us of all that is inspiring, fearless, truth-seeking and, indeed, energising in the American radical spirit. It was a privilege to know Barbara – as a friend and a comrade – over so many years.

I was saddened and shocked to hear of the death of Barbara. I had only a couple of days ago read her review in the latest Race & Class and, as ever, I learnt much, not least about how to write well about complex issues. She was a great scholar activist who will be sorely missed.

Thank you Liz for this lovely tribute to Barbara, her work and her spirit. One book of hers that was especially important to me was Barred: Women, Writing and Political Detention, the sequel to Resistance Literature. Barbara was one of the first to treat prison as an important context and laboratory for political consciousness while maintaining an appreciation for the literary. She was also a great book reviewer,as the many reviews she wrote over the years for Race & Class attest. I met Barbara ages ago when I was a graduate student and she was a marvel: we all wanted to be like her! The outfits being an additional original fashion statement! Didn’t succeed, but her ongoing inspiration was a great challenge and I will miss her.

I first met Barbara in 1984, when I moved to Wesleyan University in Middletown, Connecticut to take up a fellowship in the Center for the Humanities. Having recently left the American University of Cairo, Barbara was then teaching at Hobart and William Smith Colleges in upstate New York, but she came to Middletown most weekends to be with her then-husband, David Konstan, who was a classicist at Wesleyan. Barbara and David lived next door to me, and I got to know them well. They were wonderfully hospitable people: and because Barbara and I shared an interest in ‘Third World’ literatures, we quickly became friends. She was in the process of writing Resistance Literature, which would be published to great acclaim in 1987. We spent hours discussing the work of such writers as Achebe, Armah, Breytenbach, Gordimer, Ngugi, and Salih, African writers with whom I was familiar: but Barbara introduced me also to a range of writers I had never read before: her favourites, of course, were Kanafani (some of whose stories she had translated) and Darwish. Barbara had a fierce, passionate, and partisan critical intelligence that I loved and admired. She radiated a personal warmth also. She will be sorely missed.

Barbara was a longtime friend and comrade, whose writing and teaching inspired me along with hundreds and hundreds of other students and colleagues over the years. Her uncompromising sense of the political and her tireless support for radical activism are rarely matched in today’s academic environment. I first met her in the early 1980s and have considered her a close friend all these years. I didn;t see her much in the last few years, but am now glad for a couple of lovely hours I spent with her last year in Austin. I will miss you, Barbara.

Barbara and I were close friends for 38 years. She used to visit Sarah Graham-Brown and me in our flat in London two or three times a year. The visits were a combination of laughter and invective, but they also gave us a notion how her life and work were going
Barbara was closely concerned with her students and I believe that her biggest contribution was making students aware of the major themes, common sources and obscurantist vocabularies running through the gross injustice so rife in all our lives and in all places in the world today.
Her intellectual production was formidable. Stefan Sperl, another old friend, on hearing of Barbara’s death, commented that ‘Resistance Literature’ was a very popular text in SOAS.
Barbara’s passing has left a dark place in all our spirits.

I specially endorse Nels’ comments on Barbara’s contributions to her students. When she visited us she would enthuse about outstanding work by her latest students and sometimes bring completed papers for us to read. I think she also made a special effort to offer them different perspectives that challenged their assumptions.
And she did this for friends and colleagues too. Over the years Barbara certainly kept my brain in gear, always ready to read drafts and sending me a steady stream of fascinating images, articles and critiques which provided unusual insights and sometimes quirky perspectives on topics I was working on. I already feel the loss of this comradely yet sometimes acerbic support and enthusiasm.