A legal observer examining the policing of a February English Defence League (EDL) demo in Leicester, describes how its members were protected by the police whilst counter-protesters were ‘kettled’ and harassed.

You had to wonder at and yet be extremely concerned about mass kettling and the suspension of rights to free assembly and movement on 4 February 2012 in Leicester. The police used their extensive public order powers to limit the right of people to protest against the EDL marching through the centre. From where I stood (kettled) EDL marchers could wander without hindrance in the city centre, making gestures of defiance and enjoying the protection of the police. This was business as usual in Leicester; the EDL free to march  and the new mayor and Leicestershire Constabulary acquiescing to its demands and allowing its members free rein to march through the city. In contrast, Leicester United Against Fascism (UAF), independent anti fascists and groups of young Muslim people were tightly controlled.

I have attended a number of EDL demos up and down the country over the last three years as a legal observer, and stewarded UAF demos on 4 February this year and in 2010. In both, together with the Network for Police Monitoring (Netpol) and agencies such as The Racial Equality Centre (TREC) and the Highfields Centre, I have co-ordinated the deployment of community-based legal observers. Legal observers are often externally deployed by groups such as Green and Black and Legal Defence Monitoring Group but In Leicester we took a different decision. We trained up people from local agencies and community groups thereby recognising their local knowledge and understanding. The legal observers are representative of the communities but also have clout at street and institutional levels, so as to be better placed to make appropriate interventions (rather than make a situation worse). As always, legal observers are independent and document police mobilisation and use of powers.

The experience of policing in Leicester in 2010 when the EDL previously tried to  march but had to compromise on a Home Office-imposed static rally, was so vexed, that the policing watchdog Network for Police Monitoring investigated and published a report on the October 2010 rally.[1] It reported that ‘significant disorder occurred during the process of moving EDL supporters from the pubs to the rally site, several busloads of EDL supporters attempted to break out of the designated areas. There was a serious confrontation with police…’ The EDL went on, according to the report, to attack a fast food outlet where young Asians were eating and hundreds of Muslim people then gathered to protect the community and mosques from anticipated attacks. 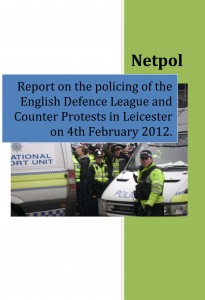 It was clear that this year the police were set on a strategy of controlling dissent from anti-fascists and Muslim young people. The story that emerged from activists and legal observers was the same: the kettling operations conducted by the police on the UAF supporters and young people seemed to be in stark contrast to how members of the EDL were treated. When long-standing senior councillors can be harassed and a newly-elected female councillor pushed by the police, it suggests how ordinary citizens are being treated. Throughout the day it was also evident that young people, particularly young Muslims, were being stopped from going into the town centre. (It emerged in the second report by Netpol on Leicester that the police had undertaken in advance  ‘wide ranging programme to dissuade local people from engaging with or taking part in lawful marches and assemblies on 4th February .’ A special Operation Stay Safe urged all households with school age children to stay home and leaflets warned that  young people taking part would be taken to ‘a place of safety’ . Such ‘scare tactics’ are criticised in the report as not just a waste of tax-payers money but also as legally questionable.[2])

The mayor proclaimed that it would be ‘business as usual’[3] on 4 February but many businesses were adversely affected by the route given to the EDL. Many closed for a half day and the busy outdoor market was reduced to one stall. Many Muslims – black and brown citizens of Leicester – stayed away, especially those with children. In one sense it was ‘business as usual’ for those young Muslim men who did venture into town, because they were persistently stopped and searched and harassed by officers from the seventeen forces on duty. Legal observers witnessed countless incidents where local young Muslims were moved on, stopped and searched and in some cases apparently hurt. Young men from St Matthews and Highfields (the main BME areas of the city) were involved in skirmishes with the police in Abbey Park where dogs were set on them. According to Netpol, ‘ the actions taken to separate the Muslim population from the EDL were in many cases excessive and may have been counter-productive. The police were perceived as imposing a form of “lockdown” … and the significant use of force against Muslim youth did much to reinforce this message.’

This was very much my experience. The end of the rallies and marches should have been the end of business that day. However, I learned an EDL group had managed to get to Charles Street so I ran to provide support and reassurance. At the same time a group of Muslim young men ran into the town centre, and I was caught in a police kettle with them. These lads became very angry about how they were being treated. We have to ask why groups of EDL supporters were not controlled in this way. But on a wider level we need to understand the anger and frustration that many young people felt with the decision of a local leadership, abdicating its responsibility to combat racial and faith discrimination, to allow the EDL to march through the city. That the community youth wanted to challenge the EDL on their home turf was understandable, but that their natural response was effectively criminalised  is extremely worryingly. In many ways this was a continuation of what happened in 2010 in Leicester where Muslim participation in the democratic right to protest was again curtailed and controlled.[4]

Everything points to an appeasement of the EDL. It is alleged that the organisation was offered eleven routes by the police/mayor before agreeing on one that would take it to the city centre clock tower. It seems to us that the police and authorities bent over backwards to facilitate the EDL and in contrast tightly controlled the counter demonstrations and spontaneous mobilisations that young Asian men were engaged in. There needs to be a full inquiry into policing of 4 February by Leicestershire Constabulary, the local authority and the Mayor to determine why there was a disproportionate policing of one section of the community, and what impact this may have in further marginalising Muslim young people and alienating them from the political system.

View footage of the demonstrations here

Download the Report on the policing of the English Defence League and Counter Protests in Leicester on 4th February 2012 here (pdf file, 312b)

Not sure about this. The author clearly has an agenda supporting the various aims of the race industry and promoting its overall victim culture. The police clearly needed to kettle UAF supporters since in the past, it has been the violent behaviour of the UAF that has caused trouble rather than that of the EDL. Until the UAF and organisations with similar objectives learn that they do not have the right to bludgeon, beat and intimidate people who do not share their extremist views,they will continue to be kettled.