Calais two years after the ‘Jungle’

Written by Eliane and Anya Edmond-Pettitt

Eliane Edmond-Pettitt describes how the situation in Calais has changed for volunteers on the ground since the Jungle came down in 2016.

In October 2016 bulldozers entered the Calais ‘Jungle’, a shanty town built on an asbestos field on the edge of Calais near the port. The event gained a lot of media attention and many of the ‘Jungle’s’ residents were bussed to accommodation centres across France. But two years on, it is clear that the problem has not been solved. There is still a community of displaced people in Calais and the surrounding areas, and activists to support them. The displaced people are continuously evicted and ‘moved on’ from any makeshift camp to maintain the declaration made by President Macron at the closure of the ‘Jungle’ that no camp of this kind would be allowed to be established again in France. In addition from volunteers and displaced people continue to report police brutality and intimidation, making aid work incredibly difficult. 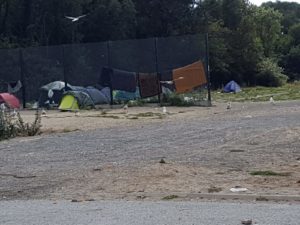 The state’s role in Calais

The state authorities in Calais continue to provide the bare minimum in aid and support, and there have been legal battles around installing showers and water points in the area. As a result volunteer organisations are still needed to step in and fill the gap. The constant dispersal of displaced people creates a game of cat and mouse between the aid organisations, the displaced people and the CRS (the riot police). There are currently two evictions a day (apart from Sundays). Each time a temporary site is cleared the police confiscate refugees’ belongings. According to a French organisation L’Auberge des Migrants, who have been working with refugees and migrants in Calais for ten years, one tent or sleeping bag lasts just five days. This means a constant supply of new tents and sleeping bags is needed. Even with the hundreds of tents salvaged from UK festivals this summer and donated along with other donations, there is no way to keep up with the demand. This is of course an unsustainable situation.

In response to the difficulties and intimidation experienced regularly by volunteers, they are documenting any police transgressions by filming or reporting incidents whenever they happen. There have been a number of reports on the state of affairs in and around Calais, including Humanitarianism: the unacceptable face of solidarity. In August 2018 a network of charities that work out of a central warehouse in Calais, namely Help Refugees, L’Auberge des Migrants, Utopia 56 and Refugee InfoBus, published a report on experiences of police harassment and intimidation. The report, Calais: the police harassment of volunteers, is based on the testimony of fifty volunteers from many of the organisations working on the ground in Calais. 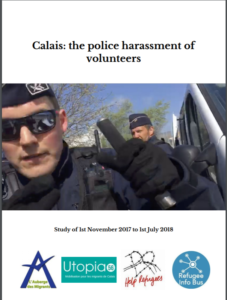 The report, which is in three main sections, highlights a range of forms of police brutality: constant pressure (including images and films being taken of volunteers); obstructions faced by associations (including fines, banning of distributions and even prosecution); daily police violence (both verbal and physical violence as well as abuse of power).  Documented testimonies of police failings and  inadequate provision for refugees as well as abuse of volunteers show how this is not merely governmental negligence but a strategic way of making the already difficult job of aid organisations even harder within Calais and Dunkirk.

The more things change, the more they stay the same

I have volunteered in Calais a number of times since 2015, both when the ‘Jungle’ was still present and since, and I have seen how the police response towards both volunteers and refugees has changed. During my most recent visit to Calais in late August 2018, I noticed a lack of visible policing, particularly at the distributions which were held in Calais itself. Both of these actions mark a change from previous visits. The distributions were often smaller, between fifty and 150 people. The small numbers coming to the distributions have more to do with the dispersed nature of the displaced community now than a dramatic decrease in numbers. Their presence is seen most clearly in the evictions that are still happening at each site every day. 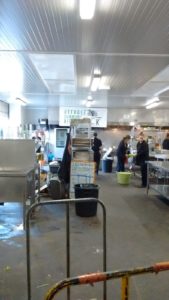 There are multiple sites around Calais where small groups of refugees are currently residing. The French authorities will go to these sites once or twice daily, evict the residents and forcibly remove their belongings. So although there are fewer CRS vans visible in the city of Calais, there is still a clear and definite police presence. The report suggests that the decrease in visible policing towards volunteers is part of the new strategy that sees police brutality concealed through intimidation and excessive use of legal measures, i.e. traffic violations and identity checks.

There are continued reports of brutality and violence towards the displaced community. During my last trip to Calais I spoke with another volunteer who told me that whilst working at Dunkirk she had seen a six-year-old girl with a broken arm. When she asked how it happened she was told that it was pulled so violently by the police that it broke. Such accounts show that forcible removal and police brutality still exist for the displaced population. However, with them so dispersed along the border the violence is more easily committed out of the sight of volunteers.

Despite all the intimidation and violence experienced by volunteers, which is so powerfully and thoroughly presented in the report, they continue to do amazing work. All the organisations provide different services. For example; RCK provide hot food, Info Bus legal aid, IT support – Wi-Fi and technological support and L’Auberge des Migrants provides sleeping bags and tents. This allows for good working relationships between all the organisations with minimal overlapping of services. This in turn helps the displaced community as the same designated distribution locations are used by all groups every day.

As well as responding to the immediate needs of the displaced population, the aid organisations are also conducting a census to try to determine an accurate number and demographic of those living in northern France. For this all donations are logged and the number of people assisted so that Refugee Community Kitchen and other organisations know how much food to make, and how many tents and clothes are needed. They are trying to be proactive rather than merely reactive and filling the gaps left in the minimal state intervention. This shows the adaptability and resilience of aid organisations against the many challenges created by government policing.

Help Refugees Summary, A Brief Timeline of the Human Rights Situation in the Calais Area

But is it sufficient to obtain you product the consumer?

Quite a few do not require to make any resolve for anyone and wish to remain expense.
Set intention in motion and enjoy the healthy process.

Everything posted made a great deal of sense.
But, think on this, suppose you added a little information? I am not saying your information is not good., but what if you added a title to maybe grab folk’s attention? I mean Calais two years after the ‘Jungle’ |
Institute of Race Relations is kinda boring. You ought to
glance at Yahoo’s front page and see how they create post headlines to grab people to open the links.

You might add a related video or a related pic or two to
get people interested about everything’ve written.
Just my opinion, it could bring your website a little bit more interesting.