A fortnightly resource for anti-racist and social justice campaigns, highlighting key events in the UK and Europe

News stories related to coronavirus have been compiled in a separate calendar, view here.

10 March: The Guardian reports on a former British army sergeant whose two sons are England rugby internationals, who is stuck in Fiji while his wife awaits cancer treatment in Britain, one of the Commonwealth veterans barred by restrictive immigration rules from returning to the UK. (Guardian, 10 March 2020)

12 March: Rishi Sunak, Chancellor of the Exchequer, announces in a Budget speech that the Immigration Health Surcharge paid annually by migrants living in Britain would increase from £400 to £624. Campaigners say those affected already pay tax and national insurance so are being ‘charged twice’ for NHS treatment, and include many vital NHS workers. (Independent, 12 March 2020)

12 March: The EU’s commissioner for home affairs warns the Greek government that it must uphold the right to asylum following reports that asylum seekers have been beaten and expelled to Turkey without the chance to claim asylum. (Guardian, 11 March 2020)

16 March: A fire breaks out at Moria Camp in Greece, killing one young girl. The fire is believed to be have originated in a shipping container. This is the third fire in a Greek camp in the last 6 months. (Are You Syrious, 16 March 2020)

17 March: The Turkish government seeks more cash in return for stopping refugees from leaving for Greece, after receiving just over half of the €6 billion agreed in negotiations for the 2016 EU-Turkey deal. (Guardian, 17 March 2020)

12 March: The EU launches a time-limited enhanced ‘voluntary return’ package, offering migrants on the Greek islands €2,000 each to go home, to relieve the pressure on the camps. It hopes up to 5,000 migrants will take it up in the month it will run. (Guardian, 12 March 2020)

13 March: AYS reports that the Greek authorities are returning Afghan nationals and others detained on naval vessels on Lesvos to Turkey by getting them to sign voluntary return documents which surrender their rights to claim asylum, without understanding the documents, which are in Greek. (AYS, 13 March 2020) 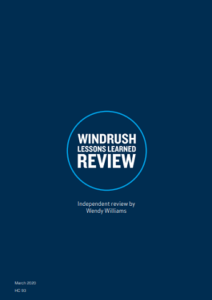 19 March: Home secretary Priti Patel releases the Windrush review report, which condemns the Home Office for ‘institutional ignorance and thoughtlessness towards the issue of race and the history of the Windrush generation’ which created a ‘foreseeable and avoidable’ scandal. Campaigners demand an investigation into institutional racism in the Home Office. Read the report here. (Guardian, 19 March 2020)

12 March: The Equalities and Human Rights Commission (EHRC) calls for suspension of facial recognition software used by the police at shopping centres, events and concerts, arguing that the software could amplify racial discrimination and stifle free expression. (Guardian, 12 March 2020)

13 March: Superintendent Robyn Williams, one of the Met’s most senior black officers, is sacked for gross misconduct at a fast-track disciplinary hearing while her appeal against conviction for possession of a child-porn video is pending, despite support from groups including Justice for Grenfell and warnings that her dismissal would damage the Met’s reputation. (Guardian, 13 March 2020)

14 March: The Met police admit that forcing Muslim women to remove their headscarves at UK airports could be unlawful, as it settles a claim for violation of rights to religious observance over threats to remove a woman’s hijab by force to photograph her under counter-terrorism powers. (Observer, 14 March 2020)

18 March: The Independent Office for Police Conduct (IOPC) says the Met police’ national domestic extremism and disorder intelligence unit (NDEDIU) shredded documents in May 2014 after being instructed to retain them for an inquiry into undercover operations including infiltration of over 1,000 political groups since 1968 and spying on the family of Stephen Lawrence. (Guardian, 18 March 2020)

23 March: Campaigners call for the immediate release of internationally renowned Malian singer Rokia Traoré, on hunger strike at the Fleury-Mérogis prison near Paris after she was arrested for extradition to Belgium on allegations of kidnapping her own daughter, despite having a Malian diplomatic passport. A Malian court gave Traoré custody of her the child, but a Belgian court ruled in favour of her former partner, a Belgian citizen. (Guardian, 25 March 2020)

14 March: Natacha Bouchart is re-elected to serve as mayor of Calais for the next six years, with over 50 per cent of the vote. During her previous tenure she passed ordinances banning the distribution of food and drink to displaced people. (La Voix du Nord (£), 15 March 2020)

ANTI-FASCISM AND THE FAR RIGHT

12 March: Germany’s domestic intelligence agency puts the most radical faction of the far-right Alternative for Germany (AfD), Der Flügel (The Wing) under formal surveillance as its chief describes far-right terrorism and extremism as the biggest danger facing democracy. (Guardian, 12 March 2020)

12 March: The High Court hears a libel action against Tommy Robinson for comments he made on a viral video showing Syrian refugee Jamal Hijazi, then 16, being pushed to the ground and threatened with drowning in Huddersfield in November 2018. Robinson claimed Jamal was ‘not innocent … he violently attacks young English girls in his school’, leading to far-right groups targeting him and his family.  (Mirror, 12 March 2020)

19 March: Police conduct raids in ten German states on members of the far-right group Reichsbürger (Citizens of the Reich), in connection with the Hanau massacre in February. In an unprecedented move, interior minister Horst Seehofer, bans the group, which denies the existence and authority of the modern German government. (Deutsche Welle, Guardian, 19 March 2020)

19 March: Five people are convicted of membership of National Action, a proscribed terrorist organisation. The evidence showed fanatical racism, an obsession with weapons and participation in chat groups exchanging violent and racist imagery. One member was previously convicted for inciting racial hatred in Birmingham. (CPS, 19 March 2020)

22 March: It is revealed that a new body announced by Theresa May when prime minister to tackle ‘deep-seated societal injustice’ including disparities over race, gender, deprivation, sexuality and disability, the Office for Tackling Injustices (OfTI), has never been convened, has no budget or remit, and some involved say it does not exist and never will. (Observer, 21 March 2020)

23 March: A Clevedon teacher who made racist comments in a primary school class and on social media is banned from the profession. The 52-year-old called Asian men ‘child rapists’ and described Islam as a ‘vile religion’ online.  He shared similar views in class, such as ‘all Mexicans are criminals’, according to a Teaching Regulation Agency report. (North Somerset Times, 23 March 2020) 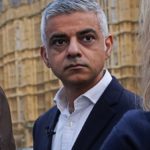 13 March: Conservative housing secretary Robert Jenrick bans the publication of London mayor Sadiq Khan’s new London Plan in a letter accusing him of stifling the spatial development of London by an ‘over-restrictive stance’ which ‘actively discourages ambitious London boroughs’. The mayor’s spokesman says the minister is running roughshod over the mayor’s efforts. (Inside Housing, 13 March 2020)

16 March: The new budget released by Conservative chancellor Rishi Sunak includes a £12.2bn cash injection into the Affordable Homes Programme over the next five years, but it is unclear how much of this will be spent on building social housing for society’s most vulnerable. (Inside Housing, 16 March 2020)

16 March: Hundreds of workers at St Mungo’s, Britain’s biggest homelessness charity, start a three-day strike in protest at working conditions and the treatment of vulnerable migrant rough sleepers whose details the charity shared with the Home Office. Benjamin Morgan, head of the EU homeless rights project at the Public Interest Law Centre, says the action ‘shows homelessness workers are making links between their own work conditions and the failure of managers to stand up for the rights of rough sleepers. St Mungo’s helped create a “hostile environment” for homeless people by sharing personal data with the Home Office without consent.’ (Guardian, 16 March 2020)

16 March: Minicab app company Bolt, which seeks to oust Uber in London and treats its 30,000 drivers as self-employed, is taken to court for allegedly paying its drivers less than the minimum wage. (Guardian, 16 March 2020)

11 March: Twenty organisations including mental health charities and the Royal College of Psychiatrists call for an independent inquiry into the deaths of vulnerable people who were reliant on welfare benefits, following revelations about the case of 57-year-old Errol Graham, who died of starvation after his benefits were cut off. (Guardian, 11 March 2020)

13 March: The entire race equality committee of actors’ trade union Equity resigns in protest after the union apologised and paid damages in settlement to Laurence Fox for criticising his views on race expressed during TV’s Question Time in January. (Guardian, 13 March 2020)

11 March: A global survey on attitudes to colonialism finds that a third of British people believe those colonised by the British were better off because of it, a finding educationalists believe raises questions about poor teaching and lack of debate on colonialism. (Guardian, 11 March 2020)

16 March: Amazon bans the sale of most editions of Hitler’s Mein Kampf and other Nazi propaganda books from its store after decades of campaigning by Holocaust charities. (Guardian, 16 March 2020)

22 March: Baroness Warsi and Labour MP Debbie Abrahams, co-chairs of all-party group Compassion in Politics, ask the BBC if it deliberately invites or attracts members of far-right groups to the audience of Question Time and calls on it to stop sharing inflammatory videos from the show on social media, after it uploaded to Twitter a racist rant by an audience member, allegedly a former National Front member and supporter of Tommy Robinson. (Observer, 21 March 2020)

11 March: Hounslow Women’s player Sue Kumaning reports that she was called a ‘black p****’ by an opponent during a game against Plymouth Argyle. The Middlesex and Devon Football Associations are investigating the incident. (Telegraph, 12 March 2020)

10 March: Police investigate an alleged racial attack on 27 February on 19-year-old Kamarl Nelson, leaving him with a suspected fractured eye socket and bruised ribs, by guards at Manchester United’s Old Trafford ground who did not believe that he worked there and allegedly called him a ‘slave’. (Guardian, 10 March 2020)

11 March:  A 52-year-old man is charged at Dundee Sheriff Court after verbally abusing a man who asked him to turn down loud music on the train between Aberdeen and Dundee. The victim was subject to racist remarks and threats such as ‘we are ******* Scottish. If you get off at Dundee I’ll do you’. (Evening Telegraph, 17 March 2020)

12 March: Police in Exeter appeal for information after a busker is subject to racist abuse by a group of people on the High Street. (Devon Live, 12 March 2020)

13 March: Merseyside Police appeal for witnesses following a racially motivated arson attack on a man’s house in Liverpool on 10 February, when petrol was poured through the letterbox and a fire started. Police believe the victim, who managed to put out the fire, was targeted because of his nationality. (BBC News, 13 March 2020)

15 March: On the anniversary of the Christchurch attack, 49 churches, mosques, gurdwaras and Hindu temples in England and Wales share £1.6 million in Home Office funding for security to protect them against hate crime attacks, and the Home Office announces a doubling of the fund for next year to £3.2 million, as police statistics show an increase of ten per cent in hate crime to over 103,000 incidents in 2018-19. (Professional Security, 18 March 2020) 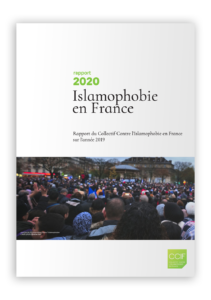 16 March: A 28-year-old man who made racist remarks and threatened to stab a doorman at a Wetherspoon’s pub in Nottingham is fined. He shouted, ‘You’re not even from this country. You don’t speak good English. Go back to your country’,.  (Nottingham Post, 16 March 2020)

17 March: Two men are jailed for attacking a 15-year-old Coventry schoolboy and his older brother last April whilst they were walking home. The victims were repeatedly punched, kicked and verbally abused, and the 15-year-old needed treatment at an emergency eye clinic. (Coventry Telegraph, 17 March 2020)

19 March: British Transport Police appeal for information on a man allegedly involved in the assault and racial abuse of a woman at Manchester Piccadilly station on 10 February. (Manchester Evening News, 19 March 2020)

The calendar was compiled with the help of Laura Wormington, Aisha Rana-Deshmukh and Graeme Atkinson.