A fortnightly resource for anti-racist and social justice campaigns, highlighting key events in the UK and Europe

News stories related to coronavirus have been compiled in a separate calendar, view here.

25 March: In response to a Law Commission report published in January, which recommended the simplification of the ‘overly complex and unworkable’ Immigration Rules that structure the UK immigration system, the Home Office says that it has already begun the process of ‘reviewing, simplifying and consolidating’ them. (Free Movement, 25 March 2020)

29 March: The Right to Stay campaign, launched by Another Europe is Possible and supported by the Joint Council for the Welfare of Immigrants, urges the government to replace the application process for settled status with a guaranteed statutory right to stay for all EU citizens residing in the UK. The action comes amid concerns that, with resources diverted to fight coronavirus, EU citizens’ need to apply for settled status will be ignored. (Guardian, 29 March 2020)

2 April: EU Commissioner Ylva Johannson says the Greek government has decided that those who arrived in Greece in March will have the right to claim asylum, reversing an emergency decree suspending asylum procedures. (Are You Syrious, 2 April 2020)

2 April: The European Court of Justice rules that the governments of Hungary, Poland and the Czech Republic broke EU law when they refused to take refugees arriving on the Greek islands in 2015. (Guardian, 2 April 2020)

29 March: Some 30 shacks in a makeshift migrant encampment near the city of Foggia, southern Italy, burn down in a reportedly accidental fire. None of the roughly 1,500 inhabitants of the soon to be dismantled encampment are injured. (InfoMigrants, 31 March 2020) 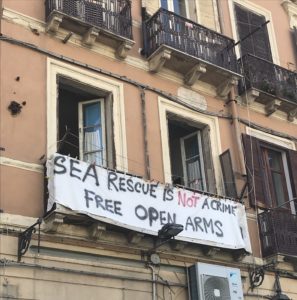 30 March: After an 8-week break, the Alan Kurdi NGO vessel leaves Spanish waters for a new search and rescue mission in Libyan waters. It is the only migrant search and rescue vessel currently operating in the Mediterranean. (InfoMigrants, 30 March 2020)

3 April: The Greek authorities deny claims by Amnesty International that in March two migrants were shot dead in circumstances that need to be investigated as they tried to enter Greece from Ankara, and that a third migrant is missing and presumed dead after Greek soldiers fired shots towards her as she attempted to cross a river into Greece. (Reuters, 3 April 2020)

6 April: Over 250 people attempt to jump the 6-foot triple fence that separates Morocco from the Spanish enclave Melilla, northwest Africa, with 50 succeeding, and many sustaining injuries. This comes as Melilla is currently at triple occupancy rate, with Amnesty International reporting inadequate sanitary conditions. (El Diario, 6 March, 2020)

6 April: According to Aegean Boat Report, over the past few weeks the Greek coastguard has carried out many illegal pushbacks, putting migrants onto life rafts and leaving them drifting in Turkish waters. (Aegean Boat Report, 6 April 2020)

6 April: The  European Environmental Bureau reports on 32 cases in five European countries (Hungary, Bulgaria, Romania, Slovakia and North Macedonia) of ‘environmental racism’ affecting Roma communities who live in or near some of the dirtiest sites in Europe, such as landfills or contaminated industrial land, while often being excluded from basic services such as piped drinking water, sanitation and rubbish collection. (Guardian, 6 April 2020)

24 March: The UK’s low age of criminal responsibility, minimum pay rates for young teenagers, and the failure to outlaw all forms of corporal punishment breach Council of Europe standards for social rights, according to its latest report. (Guardian, 24 March 2020)

26 March: The number of outstanding crown court cases in England and Wales has reached the highest level for two years, figures show, amid growing concerns about pressures on the criminal justice system caused by the Covid-19 crisis. (Guardian, 26 March 2020)

30 March: A video goes viral showing a police officer beating a young man and his mother after performing a random stop-and-search on the man, and detaining both, in San Francisco, Bilbao (Spain), which has a large immigrant population. Anti-racist collective SOS Racismo denounce the incident as ‘police brutality against a racialised young man’, and call a protest. (Público, 30 March 2020)

6 April: For the third time since March, a car belonging to politicians from Alternative for Germany (AfD) is set on fire, and the far-right party claims it is a victim of far-left violence. Saxony’s state premier Michael Kretschmer (CDU) condemns violence against politicians but adds that violence can also include verbal attacks, and ‘the AfD has made large contributions to this over the years’. (Deutsche Welle, 6 April 2020)

7 April: The leaders of Jewish organisations such as the Board of British Jews and the Jewish Leadership Council praise newly elected Labour Party leader Kier Starmer, following a meeting in which he laid out his commitment to establishing ‘new standards of best practice’ regarding antisemitism. (Guardian, 7 April 2020)

ANTI-FASCISM AND THE FAR RIGHT

24 March:  Eight members of the neo-nazi ‘Revolution Chemnitz’, who carried out violent attacks against migrants and others, are found guilty of forming a ‘terrorist organisation’ and sentenced to jail terms ranging from two years and three months to five and a half years. (Guardian, 24 March 2020)

30 March: A London family launches a legal action over the role of police officers in schools, amid concerns that their presence could have disproportionately negative consequences for black and minority ethnic pupils and children with special educational needs and disabilities. (Guardian, 30 March 2020)

31 March: The Hungarian government’s National Core Curriculum is criticised for, among other things, making reading of a number of anti-Semitic authors compulsory, removing renowned Jewish authors, and promoting nationalist history. Teachers have created the hashtag #noNAT, utilising slogans like ‘I will not teach fascist writers.’ (Deutsche Welle, 31 March 2020)

7 April: The Supreme Court refuses permission to appeal in a case that saw asylum seekers in Glasgow unsuccessfully challenge the facilities multinational Serco over its right to carry out lock-change evictions on properties housing asylum seekers. (Glasgow Times, 7 April 2020)

26 March: The total number of children living in relative poverty (classed as on or below sixty per cent of the UK average household income after housing costs) was 4.2 million in 2018-19, up from 4.1 million the previous year, equating to roughly thirty per cent of all children. Campaigners warn that the Covid-19 crisis will exacerbate child poverty. (Guardian, 26 March 2020)

28 March: A court in The Hague orders the Dutch state to pay compensation to victims of colonial massacres in the 1940s in the Indonesian province of South Sulawesi, and rejects the state’s argument that the claims should be struck out given the time lapse. (Guardian, 27 March 2020)

25 March: Hertfordshire police appeal for information following the arrest of a 61-year-old on suspicion of racially aggravated assault on a 57-year-old in Stevenage on 6 March. (Hertfordshire Police, 25 March 2020)

26 March: Police open an investigation into a racist attack on 18 March in Luton, in which the victim was subjected to verbal abuse, threatened and pushed. (Luton Today, 26 March 2020)

27 March: Germany’s Funke Media Group reports that in 2019 German authorities recorded 1,620 attacks on refugees and asylum seekers (including children), with 128 directly targeting refugee accommodation. The total figure is slightly down from 1,775 in 2018. (InfoMigrants, 27 March 2020)

30 March: A 44-year-old man who smashed beer bottles, threatened and racially abused a Tesco worker on 15 March at a store in Liverpool city centre, after being confronted about stealing food, is jailed for six months for theft, possession of an offensive weapon and racially aggravated assault. (Liverpool Echo, 30 March 2020)

30 March: British Transport Police launch a CCTV appeal after a taxi driver was spat at and racially abused at Preston railway station on 17 March by two men, after he asked them to remove their electric scooter from his taxi. (Lancs Live, 30 March 2020)

31 March: A Freedom of Information request reveals that West Midlands police have recorded almost 30,000 racially or religiously aggravated offences since 2010, with the number gradually increasing year-on-year, with the highest number, 4,134, recorded in 2019. (Coventry Telegraph, 31 March 2020)

31 March: A building used by NGO Stand By Me Lesvos to store equipment, clothing and tents is destroyed in a fire in the early hours of the morning. Arson has not been ruled out, given it is the third refugee support organisation building to be damaged on the island. (Ekathimerini, 31 March 2020)

1 April: A synagogue service being held online on the Zoom video app is hijacked by racists who post antisemitic abuse to congregants, in an increasing incidence of ‘zoombombing’, where uninvited guests enter meetings, as more people use the app for virtual events during the coronavirus restrictions. (BBC, 1 April 2020)

1 April: Police release a CCTV appeal after a man and a woman are racially abused on a bus in Newcastle on 24 February. A man and a woman travelling separately were subjected to racist abuse and the man had a number of punches thrown at him. (Chronical live, 1 April 2020)

4 April: A 31-year-old Indian man is racially abused in a park in Sheffield by a group of young people. The victim states that ‘they were doing mock Asian accents at me’ but stresses the issue was that they were breaking social distancing rules and intimidating families as they walked by. (The Star, 4 April 2020)

6 April: Guernsey Police appeal for witnesses after a man made a racially motivated remark to a woman in Waitrose car park on 3 April. (Bailiwick Express, 6 April 2020)

6 April: A German TV documentary (‘The Weak State’) finds that only 8 per cent of racist attacks on asylum seeker hostels in Germany in the period 2015 to 2018 resulted in a conviction, and that as a result of local authorities’ lax pursuit of offenders, and trivialisation of racist offences, the far Right have become ‘cocky’, with the number of far-right extremists possessing arms permits almost doubling since 2016. (Deutsche Welle, 6 April 2020)

The calendar was compiled with the help of Laura Wormington, Aisha Rana-Deshmukh, Jessica Pandian, Joseph Maggs and Graeme Atkinson.

Thank you for your comment, which refers to the incident of police violence in Spain on 30 March. We agree that ‘non-white’ is not a satisfactory descriptor. Our entries are based on what news articles say, and sometimes, as in this case, it is unclear whether a victim is black, brown or white. There is also the difficulty of summarising stories in other languages. With a translator, we have returned to the news article in question and rewritten the entry to make it more accurate.

Hello, I came across your articles while looking around on the internet. I had written this poem after the Ahmaud Arbery incident happened in my country. It so bothers me that we are still struggling with all this so many years after the Civil Rights movement of the early 60s in this country. I am not proud of this. And now we are in the middle of a crisis here since George Floyd was murdered by the police. Our pathetic President is only making things worse. Anyway, I thought maybe it would be interesting to you.

A thin layer of epidermis, sunlit
A determined attempt to hate
The human race lives as one
Whether you try to separate it or not
Is skin color so easy to split apart?
No one is black or white
Just shades of brown and tan,
A spectrum of curiosity
That drives people goofy
Hate will hate whatever is found
Skin is just an excuse
That runs out after a millimeter or so
Melanin, the magic of feathers, scales, and fruit
It all brings a beauty for someone
Or something to hide itself with
But nothing underneath lives by it,
The whole thing holds us in
But what has been so insignificant,
The shade, the tone, the oily mass,
It feels wonderful to a gentle touch
Or burns from too much sun
But nothing damages it out of nature
More than the incredible ignorance of humankind