A campaigner for Justice for Jimmy Mubenga recalls how his widow, Adrienne Makenda Kambana, was thrust into a campaign for justice. 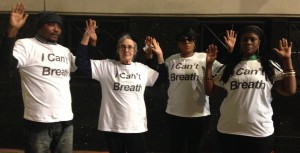 Outside the Old Bailey following the not guilty verdict (© IRR News)

This week, when a jury at the Old Bailey found three G4S guards not guilty of the manslaughter of Jimmy Mubenga on board a plane at Heathrow on 12 October 2010, few thought of the impact of the decision on his wife, Adrienne, or his family. Throughout the last four years she has persisted in a campaign to find out what happened to her husband that fateful day and to hold those responsible to account.

She began her quest with a march from the Angolan Embassy to the Home Office just a month after his death, on which she was joined by hundreds of protestors. She had to wait two months to bury her husband and, in the same week as his funeral, she spoke to the Home Affairs Committee in the Houses of Parliament about the family’s experience. 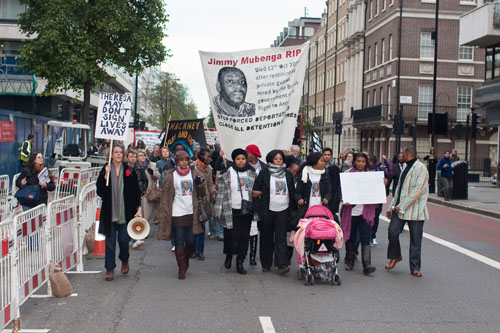 Again, she had to wait while the police completed their investigations and then she had to wait – yet again – while the Crown Prosecution Service (CPS) considered whether anyone should face charges. She marked the first and second anniversaries of Jimmy’s death with demonstrations outside the CPS – which initially had refused to prosecute the G4S officers involved or G4S itself (for corporate manslaughter). She has marched with other families on the annual United Families and Friends Campaign procession to remember those  who have died while in the custody of the state.

She has had to summon the courage to speak to the press. She has had to attend countless meetings with lawyers, advisers and officials. She has found support from a close circle of family and friends. She has also been supported by workers at INQUEST and her lawyer Mark Scott (Bhatt Murphy), whose vital support has been crucial, so much so, that life-long friendships have been made. A small group of activist campaigners have also provided support and advice.

However, it is Adrienne, a quietly spoken and unassuming woman who has, while trying to protect her family from adverse publicity, hostility and comment, been forced to campaign to find out how her husband died.

This shouldn’t happen to a person suffering bereavement. But unfortunately it is often the case for members of families of those who die in custody. They have to campaign first and grieve later.

In 2013, Adrienne had to endure the inquest, lasting over two months, where graphic details of how Jimmy came to die were spelt out. She had to hear witness after witness, passengers and BA staff, testifying that they heard Jimmy crying ‘I can’t breathe’, and other pleas, including ‘They’re killing me’, ‘You people are watching them kill me … I can’t breathe’, ‘Let me go’ and ‘I need air’. But there were no explanations as to why no one did anything and to help a man pleading for his life. She had to hear how Jimmy suffered injuries including two broken ribs, abrasions, grazes and bruises on his head, arms, and legs while the G4S officers’ reported injuries consisted of three grazes and a scratch (between them). She was grateful (as much as she could be) when the inquest jury had the courage to record an unlawful killing verdict.

The whole process was repeated at the criminal trial of the three G4S officers, which lasted seven weeks. She finally had to listen to the officers’ testimonies at the trial, hearing that they were so intent on doing the job in hand – of deporting Jimmy – that they failed to hear him pleading for his life. 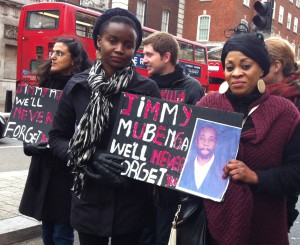 What avenues are now open for her and the family? Not many. She could bring a civil action but no amount of money can replace Jimmy Mubenga. No doubt Adrienne Makenda Kambana’s fight will go on – five children have been left without a father and she has been left without a husband. None of their lives can ever be the same.

IRR News story: The statement given by Adrienne Makenda Kambana to the inquest into his death

IRR News story: Could Jimmy Mubenga’s death have been prevented?

IRR News story: Jimmy Mubenga: A day in the life of an inquest

Somebody needs to be held accountable. This was an ienconnt person who was totally unrelated to events that were taking place in London at the time. Tough as the Police job was, we all have to know that we are safe from being shot. Why was the intelligence so far off mark ? Nobody seems to have answered that. Also why was there so many cover ups and false statements about the victim after the event. This was incredibly unfair on the family. The Police have a tough job to do, but that is no excuse for not doing it well. Before killing anybody (or anything), correct identification is a given.