A key session at an international conference in London at the beginning of November on ‘Making the world working class’ was devoted to the work of A. Sivanandan and his legacy in the ongoing work of the Institute of Race Relations. 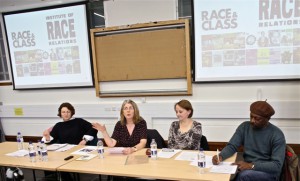 Activists and scholars, contributors and would-be contributors to Race & Class packed into a SOAS lecture theatre on 10 November to listen to A. Sivanandan, Jenny Bourne, Liz Fekete and Colin Prescod talking about the transformation of the Institute of Race Relations and its role in historical and ongoing struggles against racism in the UK and Europe. It was organised and chaired by Avery Gordon, a professor of sociology at the University of California at Santa Barbara and a keen supporter of the IRR and Race & Class (she also produces Race & Class radio), to reveal the IRR’s important and enduring contributions to race/class thinking – a theme of this Historical Materialism annual conference.

Ill-health prevented A. Sivanandan, now director emeritus, from being present, but a powerful 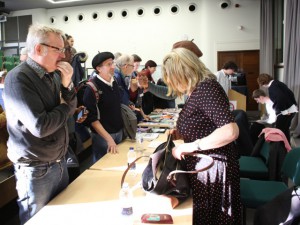 recorded discussion between him and Avery on his ‘lived theory’ was played at the start of the session and set the scene for the contributions to follow. Jenny Bourne spoke about the ways in which, against the political and financial odds, the IRR had managed not just to keep going but also to keep relevant to the struggles against racism on the ground for over forty years. Liz Fekete, now director and also head of European research, pointed to the dangers of impending fascism and the despicable treatment of the Roma in so many countries of Europe. The contribution of IRR Chair, Colin Prescod – on joining the IRR and Race & Class in the 1970s and working on anti-racist films – pointed to the way in which he felt the organisation spoke to Black community concerns.

Listen to the interview here

Slide show on the IRR’s history

Download a copy of a selected bibliography on Sivanandan and the IRR here (word doc, 76kb)

[…] for socialism. Two interviews with Siva from November 2013 can be found at the IRR website: Celebrating an Anti-Racist Institute and On Lived Theory Dominic Alexander is a member of Counterfire, for which he is the […]