Clearing Roma off the streets

The run-up to the Olympics has seen the Metropolitan Police and the London Evening Standard reinvigorate efforts to disperse homeless Roma from central London’s streets.

On 17 July 2012, the Metropolitan Police Service announced a three-month pilot project to strengthen existing relationships with the Romanian police. This is the latest development in a drive to ‘clean up’ homeless Roma from the streets of central London. The initiative, which involves the hosting of ten Romanian officers, has been set up to ‘assist in cases where suspects originate from Romania’. The Met hopes that the Romanian officers’ skill and expertise ‘will prove invaluable when dealing with those issues affecting the Romanian community within the capital.’ Boris Johnson, Mayor of London, voiced his hope that ‘only days away from the Olympic Games … this initiative will help to keep our streets safe’.[1]

So, how does the Met plan to ‘keep our streets safe’? Those who seem to be bearing the brunt of the Romanian/Met initiative, brought in ostensibly to tackle organised Roma trafficking and crime gangs and ‘support Romanian victims of crime’[2], are the most vulnerable of the Roma poor living homeless in London, who have for some months been the target of a campaign by London’s Evening Standard.

The past few months had already seen the implementation of measures to target and remove destitute Romanians wherever they become a ‘nuisance’. While Group Dispersal Zones have been operating in Kensington and Chelsea for years, ‘predominantly designed’, according to the Met, ‘to counter the increasing nuisance of Romanian beggars that frequent the area’[3], they were used in central London to push Roma poor out of tourist hotspots in preparation for the 2012 Olympic Games.

Since many tourist attractions are in Westminster, a multi-agency Operation Chefornak, designed to tackle ‘begging and antisocial behaviour’ has been introduced in the borough. ‘Begging will not be tolerated in Westminster’, announced the Met on 12 July 2012. ‘Wherever possible people begging will be arrested.’[4] The operation, which includes UK Border Agency officers and the Romanian police, resulted, as of 12 July, in 796 arrests and seventy-three ‘cease and desist’ warnings.[5] At least 670 (84 per cent) of those arrested are Romanian nationals.[6] One of those involved in the operation, Tory councillor Nickie Aiken, stated that she ‘hoped that those Romanians returning home with our help are taking the message with them’.[7] Included in the social cost of the Olympic games is the rounding up and repatriation of the Romanian poor.

The role of the Evening Standard

But it is in the Evening Standard where this operation finds and gathers support. While the Met has the cover of helping the vulnerable victims of organised crime, the paper presents a very different picture, where the Roma themselves are the exploiters, raking in ‘as much as £100,000 a year from begging and stealing in the UK’.[8] For the past few months, the Evening Standard has been publishing alarmist articles about a ‘wave of crime’, perpetrated by Roma ‘beggars’, Roma ‘pickpockets’ and Roma ‘prostitutes’, Roma ‘illegal gamblers’, ‘fleecing’ Roma, ‘unsightly’ Roma, ‘disgusting’ Roma.[9] The campaign began in earnest on 24 April 2012 when the Evening Standard announced ‘Romanian beggars “flooding” London’. In the thirteen intervening weeks, at least eleven further articles have appeared on the subject. 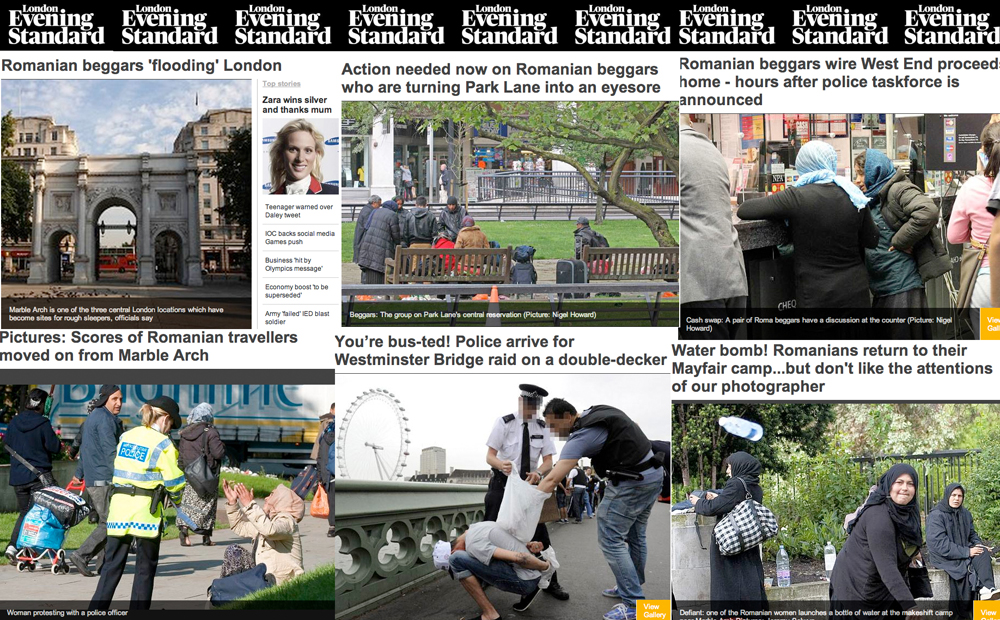 Serving as a loudspeaker for the Met’s pronouncements, the Evening Standard drums up support from its captive commuter audience. The Met finds, in the paper, a platform from which to boast its impressive arrest figures, show off its wily arrest tactics, and proudly pledge to clean up London in time for the Olympic games. Interviews with members of the public invite their readers to share their utter contempt for the Roma. Disgust is the order of the day. ‘It’s disgusting’, said Brian Portman, a tourist from New Zealand. ‘It’s like something from the Third World.’[10] ‘It’s disgusting’, said Sarah Greene, an ice-cream vendor. ‘When you walk past the subway it stinks of urine.’[11] ‘They know, like we do, that this is a huge tourist area so they come here to make money’, said an anonymous open-top bus conductor. ‘They are disgusting’.[12]

What really bites though, is the handiwork of the Evening Standard’s photography team. The special relationship between the Met and the Evening Standard is patent in the picture perfect snapshots of arrest stings on double-decker buses, clearly set up by the police in advance. The Evening Standard provides the Met with all the publicity it needs in the drive against London’s Roma. Image after image shows the paper’s spectral presence at the hounding of the homeless, their presence at scores of dispersals and arrests,[13] while the Roma themselves look impotently on as they are made so much grist to the Standard’s mill.

Its a nicely written content, a nice work done here. I like it very much a great piece of information is also given here. And also requesting to post some content who are not regular traveller as me. As a tourist I have only experience of Rajasthan Tour

It would have been worth mentioning in this article that not all Romanian people are Roma, and not all Roma are Romanian. It’s bad enough that the Police are confused without IRR reinforcing it! The Romani are a group of ethnic identities spread across Europe, which includes Roma people mainly from Central and Eastern Europe. Less than 3% of Romania’s population are Roma, compared to more than 4% of Bulgaria’s population.

Any details on convictions arising from Operation Chefornak?