Connecting the past and the present in Liverpool 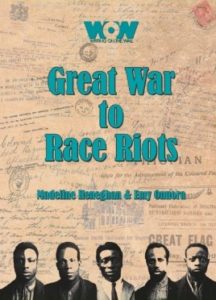 Based on the work of the Great War to Race Riots Archive presented to Liverpool-based organisation Writing on the Wall, this book/project centres around the ‘race riots’ in Liverpool in 1919, but tells a much wider and inter-connected story. As its bibliography shows, this is not the first historical account or analysis of the causes, consequences and aftermath of the riots. But it is unique in several important ways.

The background circumstances and the portrait of Liverpool’s black community pre-1919 are told with brevity yet with clarity. Starting with the growing predominance of Liverpool in the slave trade in the eighteenth century, the opening section describes the early arrival of Africans in the city as a by-product of the trade. The fierce opposition to the abolition of the slave trade from many of Liverpool’s merchants and politicians is contrasted with the hypocrisy of abolitionist William Rathbone, who profited from slavery even as he helped to found Liverpool’s anti-slave trade committee. After briefly mentioning the place of the England-based African abolitionists and their English allies in the labour and humanitarian movements, the narrative moves to trace the connections between Liverpool’s black community and the growth of the British Empire up to the First World War.

Having described a black community presence in Liverpool over such a lengthy period, the author’s account of what follows in the war years and after is shocking. Despite the racist dimension included in the pre-war Liverpool story, an unfamiliar reader would be unprepared to learn of the treatment of black troops in the first world war, where British colonial subjects from Africa, the Caribbean, India and elsewhere were subjected to institutional racism. Whether recruited to fight for Britain or volunteers, their treatment by officers, officials and administrators was frequently racist. To add insult to injury, both black soldiers demobbed in England and black workers in the factories during the war years were unemployed when the war ended. 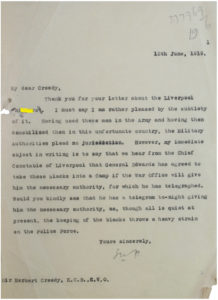 Letter in the Great War to Race Riots archive

The poverty and neglect imposed on many black people in British cities in 1919 was compounded by anti-black ‘race riots’. In Liverpool, rioting occurred in May and June in ‘three phases’. In May, a series of random street attacks on black people, and a subsequent police raid on a ‘black-run gambling house’ resulting in seventeen arrests, proved to be only a forerunner to the June mob riots that lasted several days. Resistance to attacks by the black community led to blame being levelled against them and false police accusations of ‘a riot of negroes’. In the course of one large scale anti-black riot of some 200-300 people, Charles Wootten, who was fleeing two policemen who had raided a house, was seized from the police and thrown into the dock, hit by a stone and killed. The Chief Constable asserted that ‘it was too dark to actually say’ how he got into the water, and the inquest recorded a verdict of ‘found drowned’.

Misleading accounts by the police included the Chief Constable’s description of the ‘animosity’ between the white and ‘coloured’ communities as having been ‘engendered by the arrogant and overbearing conduct of the negro population towards the white and by the white women who live or cohabit with the black men boasting to the other women of the superior qualities of the negroes as compared with those of the white men’. These racist themes fed into the press reporting of events. Racism also lay behind the government’s adoption of repatriation schemes in response, despite official worries that repatriation of former servicemen might promote adverse reactions in the colonies.

Repatriation debates are only one of the many aspects of history which this book examines. The archive on which the book is based (which can be viewed online) provides not only an updated and personalised account of the 1919 Liverpool riots. The Liverpool Lord Mayor’s correspondence, from May 1919 to November 1920, includes testimonies and letters from former servicemen and their families that ‘brings the voices of the black workers…into the centre of the discourse’. Some of these letters are reproduced in photographic form, which, together with photographs of the black servicemen who fought in the war, add a further dimension of remembrance.

But not only does this book make history more accessible: even as it enhances our understanding of the events of 1919, it also relates them to episodes of racist moral panics in more recent British history, such as the ‘black mugging’ scare of the 1970s/ 1980s promoted by the police and press. By connecting the present and the past through the themes of racist violence, racist stereotyping and resistance, this project tells both Liverpool’s story in 1919 and its relevance for today.

Writing on the Wall