On Monday 23 March 2015, the Institute of Race Relations published Dying for Justice which gives the  background on 509 people (an average of twenty-two per year) from BAME, refugee and migrant communities who have died between 1991-2014 in suspicious circumstances in which the police, prison authorities or immigration detention officers have been implicated. 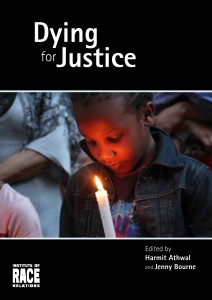 ‘If the Macpherson report was intended as a way of restoring community faith in the British police, the issue of deaths in custody is the one which is constantly undermining it. As more deaths take place and no one is ever prosecuted, it inevitably sows seeds of incredulity, anger and despair.’  Harmit Athwal, co-editor of Dying for Justice 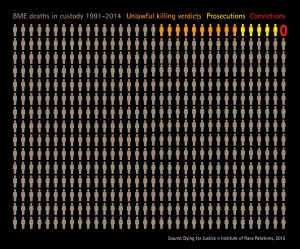 ‘The processes and procedures for getting justice are all smoke-and-mirrors, particularly for those families, friends and communities devastated by custody death loss and then made to suffer no-answers grief with no one held accountable. ‘ Colin Prescod, IRR Chair

‘There needs to be a mechanism for state institutions and the private companies they employ to be held to account when people die. The lack of accountability over black deaths in custody is a global issue and one that will not go away until urgently addressed.’ Deborah Coles, Co-director INQUEST

Or buy a printed copy here

An excellent piece of work that captures the harrowing truth of deaths in custody, but which also tells the story from the point of view of the families, friends and supporters affected.

What it also clearly sets out to me is the greater unity required within campaigning communities if we are to truly be a highly visible and potent source for change.

Congrats to everyone involved in compiling this report.