An IRR discussion paper on the Housing and Planning and Immigration Bills 2015-16. 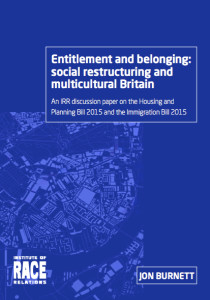 The Housing and Planning and Immigration Bills, currently going through parliament, contain measures which are central to the Conservatives’ stated belief in cohesive ‘One Nation’ government. In a discussion paper published by the IRR today, criminologist Dr Jon Burnett argues that the rapid social transformation that will inevitably take place through these mutually-reinforcing housing and immigration measures will be destructive for social cohesion. In fact, the break-up and displacement of multicultural neighbourhoods, coupled with the extended reach of immigration policing, will accentuate extremes of inequality in the inner city and lead to a marked deterioration in the quality of life for BAME communities.

Focusing largely on London, Entitlement and belonging suggests that a ‘SUS culture’ is developing in the UK as the ‘hostile environment principle’, long- established in immigration policy, is extended into housing. The government argues that nationally-implemented ‘right to rent’ checks, imposing a duty on landlords to carry out immigration profiling and allowing summary eviction of  tenants, are ‘justifiable’ measures aimed at forcing out those who have no legal right to stay in the country. Yet even its own evaluation provided compelling evidence of discrimination against BAME citizens.

According to Dr Burnett, author of the research: ‘In rolling out the measures, the government risks rolling out discrimination. Equally concerning though is the ideological assumptions underpinning the legislation about “who” belongs in particular localities. The poor in multicultural neighbourhoods are being dispossessed of their rights and uprooted from where they live. They have been deemed eminently disposable.’

The IRR hopes that this publication can encourage as wide a discussion as possible about the legislation as well as the wider goals of ‘One Nation’ government. IRR Director, Liz Fekete, asks: ‘Given that the cosmopolitan and multicultural nature of London was our brand in the  Olympic bid,  shouldn’t we be concerned when multicultural London is abandoned in favour of  a more elitist and monocultural urban future?’

Notes to editors: [1] The 16-page discussion paper examines the Housing and Planning and Immigration Bills as two inter-related pieces of legislation that reinforce one another. Section 1 explains the Bills. Section 2 outlines the IRR's key concerns. Section 3 looks at the particular issues raised over enforcement and Section 4 highlights the difficulties of holding the government to account. Tables are provided on: the key provisions of the Housing and Planning Bill 2015-16 and the Immigration Bill 2015-16; repossession 'hotspots'. A Timeline on key measures aimed at promoting a hostile environment for undocumented migrants and refused asylum seekers is included. [2] Jon Burnett can be contacted on (+44) 020 7837 0041 or Jon@irr.org.uk