The Institute of Race Relations (IRR) publishes today research showing that EU member states are using laws, aimed at traffickers and smugglers, to criminalise those acting out of humanitarian motives.

The rhetoric of EU politicians and its border force, Frontex, may be fuelling far-right extremism, it IRR warns. It has written to the European Commission (EC) urging it to reassert support for humanitarian values. 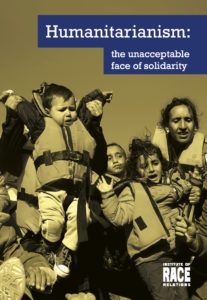 Humanitarianism: the unacceptable face of solidarity is the product of a six-month research project into the hostile political and legal environment facing humanitarian actors who seek to protect life at Europe’s sea and land borders. Drawing on the work of advocacy organisations across Europe, it provides a sample of twenty-six case studies involving prosecutions of 45 individual humanitarian actors under anti-smuggling or immigration laws since September 2015. It reports that the space for humanitarian action is shrinking within a political culture where distinctions between ‘us’ and ‘them’ seek to ensure that human solidarity ends at the gates to Europe. The report:

IRR’s vice-chair, lawyer Frances Webber, comments: ‘Across the continent, criminal laws designed to target organised smuggling gangs and profiteers are distorted and stretched to fit an anti-refugee, anti-humanitarian agenda, and in the process, criminalise decency itself.’

IRR director, Liz Fekete, adds: ‘Those who act in solidarity with refugees and migrants are considered by the far Right as self-hating westerners and race traitors. There can be no doubt that the threat of prosecution hanging over SAR NGOs and the repeated verbal denunciations of rescue NGOs by European politicians, have amplified the far Right’s extremist message.’

Humanitarianism: the unacceptable face of solidarity can be downloaded here.

Download a copy of the response from the European Commission here (pdf file, 304kb)