Discredited racial theories are discussed in secret academic forums, while Muslim and BAME students face extreme surveillance on campus. So why the double standard?

Earlier this month, the London Student newspaper revealed that a eugenics conference has been secretly held at University College London for the past three years. The London Conference on Intelligence has been hosted annually by James Thompson, an honorary senior UCL lecturer, who invited white supremacists, misogynists and eugenicists to discuss the alleged links between genetics and racial disparities. 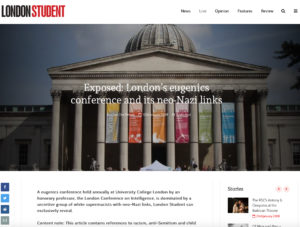 Contributors to the London Conference on Intelligence included Richard Lynn, whom the US-based Southern Poverty Law Center calls an ‘unapologetic eugenicist’ and a ‘white nationalist’. Lynn argues that ‘racial difference in intelligence’ causes differences in wealth, and that ‘incompetent societies’ must be ‘phased out’ to ensure countries remain ‘racially homogenous’. Eugenics has once again found a home in the modern day, particularly in regard to migration, whereby immigrants are perceived as a threat to a western nation’s success. Lynn claims that ‘mass immigration of third world peoples will lead to these becoming majorities… this will mean the destruction of European civilisation’. Toby Young, who was briefly the Director of the Office for Students before resigning over misogynistic tweets, also attended the conference, as did blogger Emil Kirkegaard, who has written supportively of paedophiles being allowed to have ‘sex with a sleeping child’.

No platforming in the academy, and the media

The revelation of the eugenics conference at UCL came weeks after Jo Johnson’s announcement that universities could face fines for failing to uphold free speech if their student unions do not give a platform to ‘controversial’ speakers. Johnson claimed that ‘worryingly in the UK, we have seen examples of groups seeking to stifle those who do not agree with them… young people should have the resilience and confidence to challenge controversial opinions and take part in open, frank and rigorous debate’. 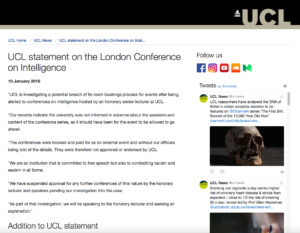 However, this same argument is repeatedly used to justify racist, discriminatory hate speech. Toby Young defended his attendance at the eugenics conference in his article for the Spectator, in which he frames himself as a victim of a ‘witch-hunt’ for attending a conference with researchers who ‘occupied the weird and whacky outer fringe of the world of genetics’. It is not clear if Young is justifying his attendance at the meeting in the name of academic freedom or journalistic inquiry. It raises the question: should white supremacists have the right to use prestigious universities as a platform for discussion of discredited racial theories?

The campus has become a place of intense obsession in the media, with right-wing papers claiming that universities are becoming ‘bubbles of received opinion, echo chambers in which the same lazy prejudices … reverberate unceasingly’. However, these very newspapers have their own policy of ‘no-platforming’ in the form of censorship. As Peter Oborne, former chief political commentator at the Telegraph, revealed, the distinction between the editorial and advertising department has collapsed, and articles that are critical of their major funders are often not published. Oborne claims that the paper’s coverage of HSBC, a major funder of the Telegraph, ‘amounts to a form of fraud on its readers’.

Prevent and the double standards of free speech

Similarly, the government is inconsistent in its support for free speech. The Prevent programme restricts the academic freedom of Muslim and BAME students who live in a campus of intense surveillance, where emails are monitored, and all staff, including security, cleaning and catering staff, are trained to spot signs of radicalisation. Prevent is even being used to censor artwork produced by students. 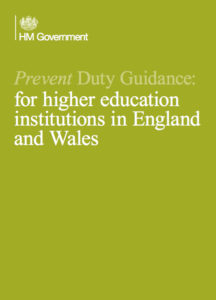 With increased policing of the campus to monitor extremism, how is it that a eugenics conference was hosted, albeit secretly, at UCL for three years? UCL, which says it had no knowledge of the conference, is now investigating a potential breach of its room bookings process for events. But is it possible to imagine that in any scenario involving Muslim/BAME students, such an event would take place? It shows that Prevent only targets certain ‘types’ of extremism, with Muslims being 400 times more likely to be referred than non-Muslims.

Prevent guidance advises that events involving ‘vocal support for Palestine’ should be ‘risk-assessed and managed’. Last year, the University of Central Lancashire cancelled a panel discussion organised by the universities’ Friends of Palestine group, citing concerns that it would not be ‘balanced’, and Exeter university banned students ‘for safety and security reasons’ from staging a mock checkpoint as a theatre performance.

As no platforming policies at university come under intense scrutiny by the right-wing media, the government’s policies and the media’s own forms of censorship much also be held accountable. Supporters of Prevent are often the first to criticise students for no platform policies, exposing the double standards of free speech.