Facing up to racial violence

The IRR publishes a report today on how racial violence is shaping the UK.

Racial violence: facing reality warns that attacks on BME individuals are actually spreading to new areas of the country, as under the impact of globalisation and austerity measures, populations swiftly change; and points to the potential dangers in ‘decanting’ those affected by the benefits cap to towns and cities which have little history of ‘diversity’. 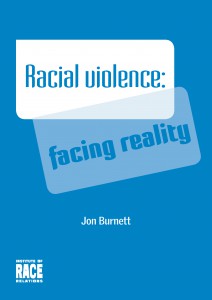 Attacks are often taking place in communities where BME families or workers are isolated, where there are few support services and such experiences often go unrecorded and become part of a repeat pattern.

The tendency of statutory agencies to view racial violence through a prism of  a generalised ‘hate crime’ means that the conditions that give rise to racism are not being understood and addressed and community safety strategies are not being created: the emphasis having moved to simply criminalising individual perpetrators.

Said report author Jon Burnett, ‘The myth is that post-Stephen Lawrence, racial violence has been magically dealt with. A few mechanical changes cannot deal with what is a huge trend tied to national political and economic forces. The legislation is allowing the criminal justice system to target a few perpetrators – and often they are not the most serious offenders, but just the easiest to successfully convict. This is putting the cart before the horse. Violence does not, by and large, spring ready-made from people’s evil thoughts, but from the larger conditions – and these are not being addressed. There is an urgent need for government – nationally and locally – to consider the implications of austerity measures, industrial and services closures, the enforced moving of populations and cuts in welfare to social issues such as racial violence.

In the twenty years since Stephen Lawrence’s killing, we have seen over one hundred deaths from racial violence in the UK. That is a terrible indictment.’

My “mixed” background family, with two sons born in Wales, have all been British since my wife ceased to be Filipino in May 2005, just over three years after her arrival in the UK.
However, there are no “economic” reasons that have justified in any form the attacks on us for over a decade – just pure hatred in part bred into children used as “child soldiers” at times.
Based on our experiences, including the time we had “enjoyed” the additional protection of three police CCTV cameras after numerous attacks on our very rural village home where we have resided since June 2002, plus car, including serious attack aimed at our elder son the day before his first birthday and when called “Rice Cooker” before his fourth birthday in a nearby town with approximately 3000 population, we now accept that such hatred and attacks just “come with the territory” and related tactics just followed our sons, aged 4 and 7 years in January 2010, to the second school tried by the elder boy since January 2007, after assaults and threat at the nearest “designated” school, before including pencil stabbing of our elder son at the second school (5 miles more distant) within the first year. However seemingly there are no records at such schools of these events.
Even after an assault by one pupil on me by a High School pupil, who had previously attacked my elder son on other occasions, after I took my sons to the “school” bus as usual one morning, the “School Liaison” police officer told me to be careful which school my sons attended, but since September 2012 I have been unable to find out why such warning had been given despite my request that all persons “with a duty of care” towards my sons need such “disclosure of intelligence” by the police and/or local authority which claims no such knowledge.
Two relatively senior police officers, in August 2010, even asked how long I had lived in Devon and did not seem “impressed” by a reply of over 20 years; possibly “trouble” is considered best “moved on” by the “System” – in their opinion! My family members believe that the attackers should move or cease to exist as culprits, preferably with active in-put of the “System”.
Graham Riches

Yes this is a sad indictment of Britain, but it’s not the full story is it? We live primarily under a CLASS system; the Upper classes (the wealthy, royals, rich businesses and corporations) are shielded from the harsh realities their tax-dodging creates and their hiving off of the best that money can buy, some of the Middle class collude in all of this for a bigger house, bigger salary, two good foreign holidays a year and a 4-wheel drive and of course private schooling for their precious offspring, and at the bottom are the poor ethnic minorities and the poor white Working class, having to fight for low-wage dead-end jobs at the bottom. If we tackle the injustices of the class system, if we we make the wealthy pay the taxes they are supposed to pay and we also accepth that their IS enough to go around for everyone but that the rich and wealthy Middle class have to PAY MORE, then we might actually change something!!! The reality is that we are having imposed on us an economic apartheid that the Middle classes tacitly accept as long as they don’t suffer. How many poor pensioners die each time there is a cold snap simply because they can’t heat their homes? It must be in the thousands and thousands? Why is nobody concerned about that harsh reality? When the wealthy and Middle classes stop being greedy and selfish, the rest of us might listen to you. Stop using black and ethnic minorities issues as a smokescreen to hide your own greed and injustice.

An excellent report, Jon. I appreciated that it is a short report and quick to read. It is also well written and free or jargon. In your recommendations, You do mention the ‘anti-migrant rhetoric’ without being more specific. The waves of such rhetoric have politics behind it, especially in the times of austerity when the anger against the system can be turned towards the so called migrants and asylum seekers. This is a political strategy. I think you could have made recommendation here for newspapers, television and journalists about the ethics of reporting accurately and with due investigations of any comments made by politicians. Claims of migrants obtaining preferential council housing or health tourism are reported without any critical investigation. I think reporters have a public duty to do this when such reports foment racial hatred and violence.

An excellent report, Jon. I appreciated that it is a short report and quick to read. It is also well written and free or jargon. In your recommendations, You do mention the ‘anti-migrant rhetoric’ without being more specific.blog commenting

Yes this is a sad indictment of Britain, but it’s not the full story is it? We live primarily under a CLASS system; the Upper classes (the wealthy, royals, rich businesses and corporations) are shielded from the harsh realities their tax-dodging creates and their hiving off of the best that money can buy..link building