Family campaigns – fighting every step of the way

The saying goes that time heals all wounds. The families of Cherry Groce and Jimmy Mubenga would probably disagree.

Last week, it was announced on Channel 4 News, that the Met police had made public their 2013 apology to the family of Cherry Groce, who was shot and paralysed during a police raid on her Brixton home in 1985. 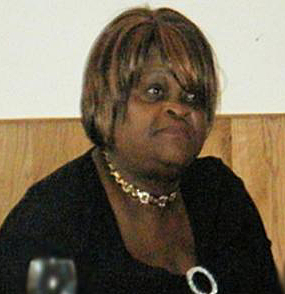 The police had earlier apologised in private to the family last year and paid compensation (with no admission of liability) to cover the care she would need. She was given ten years to live by doctors following the shooting but she actually lived another twenty-six years. She died aged 63 in April 2011 from a kidney infection. A pathologist for the family (and the police) found a direct link between the 1985 shooting and her death. That will be explored at the inquest which is due to be held in June 2014.

To add insult to injury, the family have now been refused legal aid for the inquest into her death – at which the Met police and Douglas Lovelock, the officer who shot her, will all be represented separately and paid for by public funds. (You can sign a petition to support the family’s right to legal aid here.)

Last week the Crown Prosecution Service announced that there was now enough evidence to charge the three G4S officers involved in the death of Jimmy Mubenga in October 2010 with manslaughter. 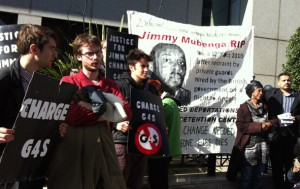 There are, however, to be no charges brought against G4S for corporate manslaughter, with the CPS finding that there was insufficient evidence to hold the company to account.

The decision to charge came over three years after Jimmy’s death and after the CPS had already declined to charge the officers in July 2012. It took an unlawful killing verdict by the inquest jury in July 2013 for the CPS to reconsider. The family of Jimmy Mubenga have fought long and hard to keep the death in the headlines, with the help of their lawyers, the charity INQUEST and campaigners against G4S. Regular demonstrations have been held at the CPS offices and outside the London HQ of G4S.

On the decision, Adrienne Makenda Kambana, Jimmy Mubenga’s widow said: ‘My children and I have waited a long time for this decision.  We hope the CPS will now move this case forward quickly. We feel like we are another step closer to getting justice for Jimmy.’

These decisions reflect the lengths families have to go to for a semblance of justice. For the odds are inevitably stacked against families seeking to expose what happened behind ‘closed doors’. 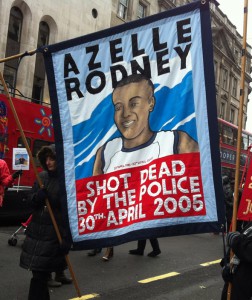 Another family awaiting a decision from the CPS and following an unlawful killing verdict, is that of Azelle Rodney. In July 2013, a judge-led inquiry found that Azelle was unlawfully killed, after he was shot six times in a pre-planned operation, on 30 April 2005, by armed police in Edgware, north London. In July 2013, the inquiry led by Sir Christopher Holland found that ‘that there was no lawful justification of shooting Azelle Rodney so as to kill him. I am wholly satisfied that firing so as to kill him … was disproportionate and therefore unreasonable and unlawful.’ In February 2014, the officer involved was refused permission to a judicial review of the inquiry verdict which his lawyers argued was ‘irrational and unsustainable’. (This is a police marksman who has already killed two people and injured two others in the 1980s.) The Mayor of London’s Office for Policing and Crime (MOPAC) even funded his judicial review to the tune of £140,000 (plus VAT)[1] and his separate legal representation to the inquiry (of over £200,000 (plus VAT)[2].

Furthermore, we have witnessed the twenty-year campaign waged by the family of Stephen Lawrence who was murdered in a racist attack – which ultimately resulted in two convictions and the landmark Macpherson Inquiry. But still the campaign for justice has to continue as more and more information about police corruption and spying surrounding the original investigation and Macpherson inquiry leaks out. Every step of the way involves a fight with the state. Yet, the last time state agents faced charges and a criminal trial, following an unlawful killing verdict, was in 2002 for the death of Christopher Alder in April 1999. (The five police officers were ultimately cleared of manslaughter and misconduct in public office charges.) And the last time a someone was convicted for involvement in a BME death in custody was in 1971 – over forty years ago – when two police officers were convicted (but only after another police officer broke ranks to voice his concerns about the 1969 death of David Oluwale (who was pulled from the River Aire on 4 May 1969).

The one and only conviction for a BME death in custody was over forty-three years ago. So how can the families of those who die in custody have confidence in a system which consistently fails them time and time again?

Read an IRR News story: Could Jimmy Mubenga’s death have been prevented?

Read an IRR News story: Two years on and no justice for Jimmy Mubenga

The United Families and Friends Campaign