Across Europe, humanitarian activists and undocumented people are organising collectively and speaking up for their rights, in the face of increased state repression. In Norway we see another example of this action being prosecuted even as the Government considers a one-off residence amnesty.

For the last few years European citizens have been making headlines for their acts of solidarity across the continent in support of people fleeing their homes and those without papers (sans-papiers). In the face of increasing repression from states they have continued to stand up for displaced people, seen in the dramatic cases of Salam Aldeen, Sean Binder and Sara Mardini and the Stansted 15 to name but a few. But now, those without documents in Europe are starting to make headlines of their own. Aboubakar Soumahoro, an Italo-Ivorian trade-union organiser and activist with agricultural migrant workers in Italy, has become an internationally recognisable campaigner since the publication of his book Umanita in Revolta (Humanity in Revolt). So too have some members of the headline grabbing French Gilets Noirs movement, which is campaigning against workplace exploitation, such as Diakité and Ahmed Abdul Karem. 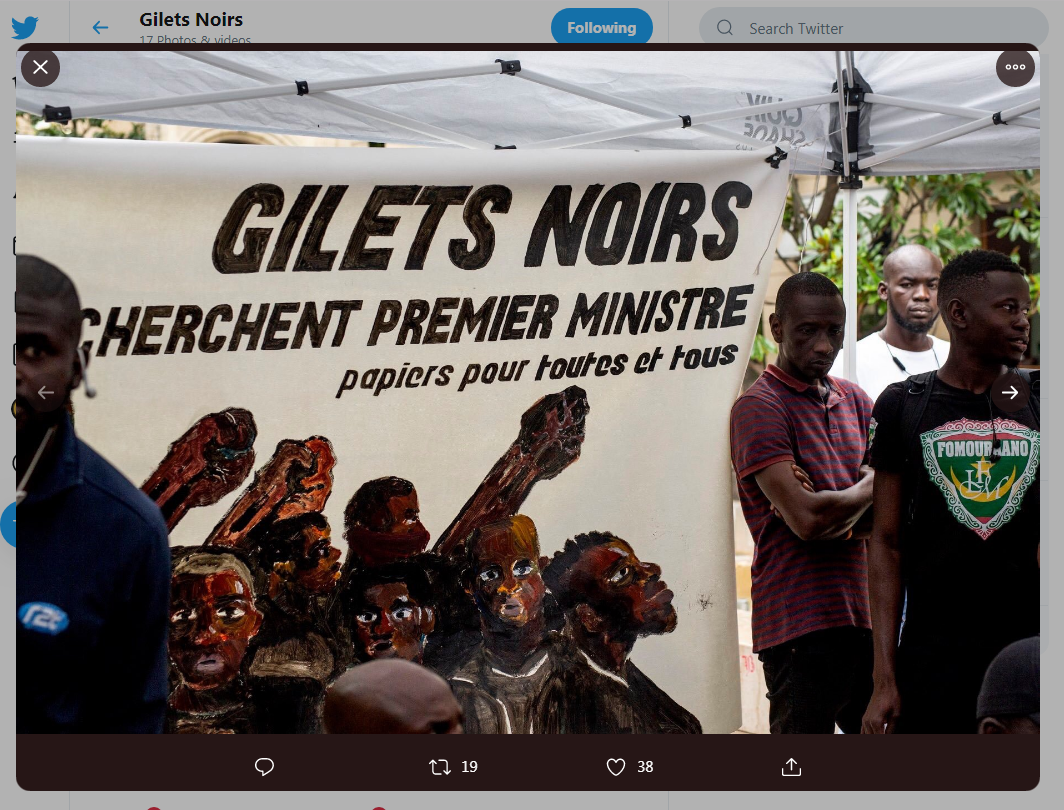 The impressive numbers that the Gilets Noirs have been able to mobilise over the summer of 2019 for their campaign and actions – seen in their occupation of the Parisian Pantheon and, more recently, the protests outside Elior head offices – have made it the most high profile movement of undocumented people in Europe today. But they are not alone; over the last year other movements and organisations have started to mobilise and seize headlines.

In Italy, in addition to Aboubakar’s union organising, there are now the ‘Black Sardines’. They take their name from the grassroots ‘Sardine’ movement fighting against Italy’s far right and have organised marches in Naples protesting for stay permits that would allow them access to the healthcare system, education and the legal recognition of children. In Spain there is ‘Top Manta’, an organisation of Senegalese street vendors created in 2015, that emerged out of the Popular Labour Union of Street Vendors, campaigning in Barcelona for regularisation and safe working conditions. They recently teamed up with artists to create 20 limited edition denim jackets that will be auctioned off to raise money for the cooperative. 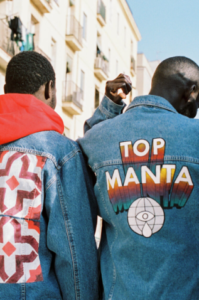 ‘People in Limbo’ in Norway campaign for amnesty

But these movements are not restricted to southern Europe. In Norway, which has long since had active refugee and asylum seeker solidarity movements, Mennesker I Limbo (People in Limbo), run by people without documentation, campaigns for changes to Norwegian asylum policy, as well as the right to work and access to education and health care.

In December 2019, it looked like Mennesker I Limbo and refugee activists had won an important concession. On 19 December the Norwegian government agreed to a one-time amnesty for Norway’s ‘unreturnable’ failed asylum seekers (unable to be deported to their country of origin due to safety concerns but rejected for asylum). However, it soon became clear that the amnesty would only be available to a limited number of the roughly 3,000 ‘unreturnables’. The bill has several restrictions, including that applicants must have lived in Norway for a minimum of sixteen years. It still needs regulatory amendment but, if the government survives a challenge to its authority by the anti-immigration Progress party (which withdrew its support due to the repatriation of a mother and her children from Syria) the amnesty will pass into law in the spring.

The passing of amnesties to legally settle various categories of migrants is a measure that has been used throughout Europe sporadically, i.e. Italy in 2006, France in 1997, Spain in 2005 as well as Germany, Finland and even the UK. Though always a contentious and limited proposal, as they generally precede or are accompanied by a tightening of controls, regularisation amnesties can improve the social and economic conditions with legal status providing relief from workplace exploitation and substandard living conditions.

However, the proposed Norwegian law for ‘unreturnable asylum seekers’ is particularly restrictive. Firstly, it is a ‘one-shot’ programme, these target a specific group of migrants and have a deadline for applications (in this case the end of 2021), as opposed to a scheme administered on a rolling basis, which is more common. Then the scheme has numerous complicated qualifiers – eg, applicants must have been in Norway for over 16 years, and to have by 2021 a combined age plus years of residency in Norway that exceeds 65 (eg, 20 years in Norway and an age of 46, or 35 years of age and have been in Norway for 30 years). The scheme does not include anyone who has a criminal conviction, excluding violations to the immigration act (by the refusal to leave Norway). 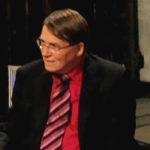 On the same day that parliamentarians were gathered in the Storting to debate the amnesty, five minutes away in the Oslo District Court former Bishop, Gunnar Stålsett’s trial began. His offence: ‘Having used illegal labour’ to give employment to precisely one of the undocumented people covered by the provisions of the limited amnesty! Since 2005, Stålsett has employed Lula Tekle, a 56-year-old woman from Eritrea, as a part-time domestic worker, first at his Bishop’s residence then, since his retirement, in his home. Appearing before the court, Stålsett accepted that his actions, which only became illegal in 2011, were in violation of the law. But, as he later told Norwegian Broadcasting, he believes his actions were ‘a form of civil disobedience’ necessary to protest an ‘immoral law.’

Stålsett is the latest in a long line of people who have found themselves in court for giving assistance to people seeking sanctuary and living in Europe without papers. Last year another priest, this time in Switzerland, was charged with ‘facilitating illegal entry’ for giving assistance to a rejected asylum seeker. The cases of Pastor Valley and Former Bishop Stålsett remind us of the historic role churches have had in providing sanctuary to people in need. Stålsett has been supported by the Church of Norway throughout his trial. The chief leader of the Church of Norway, Helga Haugland Byfuglien, called his actions brave and deserving of respect.

But support for Stålsett has gone much beyond the church community, Stålsett and Tekle’s case has captured the public imagination in Norway. On the day he was sentenced, a petition was launched by Silje Haavet Golden to cover the 10,000 NOK fine, as a way of showing solidarity. The 10,000 NOK was raised in a few hours and a week later, the petition had nearly 1,700 donations, raising an amazing 313,000 NOK. In the end the money raised did not go to Stålsett, who insisted on paying the fine himself. At his request, it was split between Lula Tekle, to support her now that Stålsett can no longer employ her, and Mennesker I Limbo to help them continue their campaigning work.

Of course, it is not just members of the church who have found themselves in front of a judge. Only a few weeks ago, we were reminded of attempts to criminalise the captain and crews of SAR-NGOs when Carola Rackete, the captain of the search and rescue vessel Sea-Watch 3, arrested in June 2019, was finally cleared of charges of resistance and violence against warships by the Italian Supreme Court in January 2020. 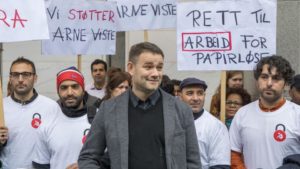 Arne Viste with Mennesker I Limbo

In Norway there have been other prosecutions of those accused of knowingly employing failed asylum seekers in defiance of immigration rules, including Arne Viste, a company manager of a staffing agency and contributor to Mennesker I Limbo. Viste, whose trial began in September 2019, was charged with knowingly employing 70 people without papers over a period of four years. Arguing that the right to work is a enshrined in the constitution, Viste welcomed a trial as a means to interrogate the right to work in the hopes of improving the situation for those without papers. He always notified authorities when he employed someone, quoting on his work permits section 110 of the Norwegian constitution that states: ‘authorities shall facilitate the conditions for every able-bodied person to earn a living by work or business.’ In October 2019 he received a year’s suspended prison sentence and his staffing agency Plog AS was fined NOK 1.5 million. The verdict disappointed Viste as it did nothing to improve the unsustainable and precarious situation of ‘unreturnable’ people in Norway.

Stålsett and Viste knew that they were breaking the law but did so anyway because they believed strongly that the law was wrong. Since the ‘refugee crisis’ grabbed the public’s attention in the summer of 2015, ordinary people have stepped in to fill the gaps left by negligent and apathetic governments. As we enter the fifth year of the ‘crisis’, these protests – whether individual or collective – show no signs of abating. For some, this is not merely a humanitarian response but a political one. But humanitarian activists are no longer the only ones challenging a system which is neither moral nor logical – those without documents are finding ways of organising collectively and speaking up for their rights.

Read about the rise and work of the Gilets Noirs here

Read Justice for the outsourced Hotel Ibis chambermaids, the latest action of the Gilets Noirs here