Germany, the far Right and the NSU trial

Attacks in Germany linked to the NSU trial demonstrate that the far Right does not need a stimulus for violence.

Following the brutal murder of Drummer Lee Rigby in Woolwich and attacks on several mosques, the government-funded Tell MAMA project warned of the dangers of cumulative extremism, tit-for-tat violence between Islamists and counter-jihadists and a ‘spiral of violence’ seemingly without end. Government counter-extremism programmes in other European countries, which tend likewise to locate all violence within a cumulative extremism framework, have been hotly contested by anti-fascists who point out that violence is central to the far Right’s modus operandi and needs no stimulus. Since the trial of the sole surviving member of the NSU and four suspected accomplices started at the Munich Higher Regional Court on 6 May (the trial is expected to last for two years) journalists from a number of newspapers, and organisations like the Media Team of the Munich Alliance Against Nazi Terror and Racism have been documenting acts of far-right intimidation and violence associated with the trial. And the Coordination Council of Muslims in Germany (KRM) have called for better protection of mosques during the NSU trial period as, according to KRM spokesman Aiman Mazyek ‘Democracies are supposed to ensure security for places of worship’. 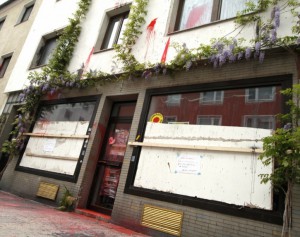 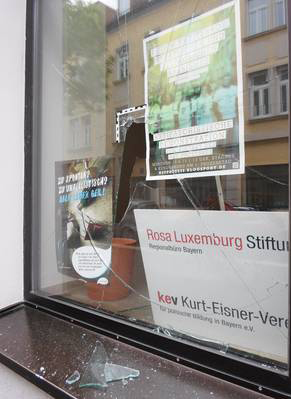 For instance, as the trial began, between 10 and 20 May, four mosques were vandalised, in Bullay, in the Rhineland-Palatinate state, as well as its capital, Mainz; in the town of Lengerich in Steinfurt and Düren in North Rhine-Westphalia. In the Duren attack, the perpetrators scrawled on the mosque the words ‘The NSU is alive and you will be the next victims’. Many acts of political intimidation have taken place in Bavaria where the NSU trial is taking place in its capital Munich. The Bavarian Refugee Council has had its building repeatedly vandalised and the Kurt-Eisner-Verein and the Rosa-Luxemburg-Stiftung offices have also been attacked. Residents at the housing project Ligsalz8 (which has also been repeatedly vandalised) were pelted with eggs on 8 May and, on 13 May the door of the Munich office of the legal team representing family members of a victim of the NSU was ‘extensively’ daubed with excrement and urine. The Süddeutsche Zeitung comments that this ‘is unlikely’ to be a ‘coincidence’. The Spiegel also took the same line when it reported on 16 May that the home of anti-racist activists was pelted with paint bombs. ‘They want us to feel unsafe’, one of the activists told the paper. ‘We won’t allow ourselves to be intimidated.’

Media Team of the Munich Alliance Against Nazi Terror