David Goodhart’s new book calls for an understanding of  ‘majority grievances’ , which, he argues, represent ‘decent populism’ not racism.

Remember the story about the blind men and the elephant? Each one feels the thing in front of him and finds something different: one man felt the ears: ‘this is a fan’; one felt the tail, ‘this is a whisk’; one felt the trunk, ‘this is a pipe’; etc. That is what interpretations of the Brexit vote is like. Everyone sees the same thing and then arranges her/his conclusions to fit an existing point of view.

Now blind man or rather blinkered man, David Goodhart (who has moved across the political spectrum from founding vaguely leftish Prospect magazine in 1995, to directing Demos, to now heading the centre-right Police Exchange’s Demography, Immigration and Integration Unit) enters the elephant (in the room) debate – of Brexit.

You might have thought that enough had already been said and written about the way a Westminster bubble was divorced from the ‘people on the ground’, about a rift between liberal southerners and the rest, about Labour’s inability to remain in contact with its former heartlands, about whether the Brexit vote was  a racist vote or not. But, apparently there is room for yet another interpretation. The Road to Somewhere: the populist revolt and the future of politics is, as far as I can see, Goodhart’s take on the rather obvious fact that neoliberalism has benefitted one section of the population at the expense of a majority now facing austerity measures, under-employment and a declining welfare system. His supposed breakthrough and the raison d’etre of the book is that the UK can now be seen as dividing into two ‘tribes’ – the ‘Anywheres’, some 20-25 per cent of the population, educated, professional, middle-class, universalist in values, mobile with ‘portable “achieved” identities’ and the ‘Somewheres’ (about half the population) who have lost out in terms of good jobs and higher education, sense the disappearance of ‘working-class culture’ and find the modern world unsettling. For him the Somewheres /Anywheres distinction has overtaken others such as Right/Left, and those between traditional classes. 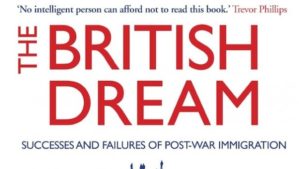 Goodhart, who in his previous book, The British Dream called humans ‘group-based primates who favour their own’, now asserts that the white majority has grievances that need to be heeded. But there seem to be problems here. Though no one would quarrel with the fact that a large section of the population and mostly within the EU referendum leavers have genuine grievances, why does Goodhart now feel the need to ethnicise or colour-code them. Why are they white grievances? In other words it is Goodhart (at pains to say these people should not be written off as just racist) who is racialising the issue. Their grievances might well be about local authority provision, neglect from Westminster, the flight of local industry, a multitude of different matters, and Goodhart happily bungs them into one category and then redefines them by colour. For him such ‘People are prepared to trade economic gain for political agency and the prospect of a society that takes them more seriously’. The issue is more cultural than economic. (That the cultural or existential sense of loss may be connected to the decimation of the UK’s industrial base and the institutions of the working class seems to pass him by.)

These majoritarian ‘Somewheres’ are hanging on to a sense of place for want of any other identity. And one cannot help thinking here that the author has been influenced by spats in the recent US hustings where Obama and Clinton were said to be appealing to identity voters, leaving Trump to assert he spoke ‘for the people’. Identity covers women, people of colour, LBGT people and the rest – the identity-less –  found a champion for their supposed lack of ‘special interest’ in Trump. Goodhart’s Somewheres, too, have no identity save grievance.

Goodhart wants us to consider, even sympathise with, majority rights. One purpose of the book seems to be to convince readers that these Somewheres have a valid point about the negative impact of mass immigration and the wrong-headedness of the Anywheres writing off legitimate majority grievances, in his words ‘decent populism’, as racist. But he presents us with a problem precisely because he is calling for an understanding of the grievances of a white majority. So what would he have us do? Give cultural rights to whites? Once you open that door what is to distinguish such policies from those of UKIP, then of the EDL, then of the BNP?

And hasn’t he overlooked quite an important anomaly, that it is exactly non-white, often non-Christian ethnic minorities who now, in parts of postwar Britain, may have the strongest sense of belonging – they have in fact in Manningham, Stamford Hill, Southall, Brick Lane – created the safety from racism of their Somewhere. It is surely that one man’s Somewhere is another man’s non-Somewhere. So white Somewheres are good in his schema but non-white Somewheres are non-existent or actually part of the problem.

And, if Goodhart is as open-minded as he would have us believe, why is he at such pains to  challenge current ‘shibboleths’ about refugees, immigration and integration? In a section of the book which reads like something from Migration Watch he writes, ‘International agencies like the UN and international refugee NGOs have a vested interest in talking up the numbers … We need different rules [from that of the 1951 Convention] to reflect our somewhat more mobile times and to keep numbers to a level that is broadly acceptable to European publics.’  Quoting Paul Scheffer (the Dutch author of The Multicultural Disaster) he writes ‘we in Europe tend to underestimate our ability to control our borders and vastly overestimate our ability to integrate people into our complex, liberal, modern societies’.

He ends up in this position because essentially, as his previous writing shows, for example in the 2004 Prospect essay, ‘Too Diverse’, he himself has much sympathy for the majority’s view that they have been culturally sidelined, their home turf made unrecognisable.  For him immigration and multiculturalism have gone too far. His remedy then is to culturalise the left-behind whites (they need understanding in terms of their whiteness) so as to place them inside and not outside the debate which he thinks should be about ‘mutual understanding’.

We have gone full circle and are back to the tame ‘atmosphere of mutual tolerance’ that formed part of Roy Jenkins’ 1966 definition of integration. Except it is half a century later, after decades of fights against racism and for black rights, and now neoliberalism is ravaging the social fabric and neofascists are being elected into power in Europe. But those issues are not the concerns of this author, and he provides no answers. This is not the work of a social analyst but of a political pragmatist advising the Mays and Mandelsons how to win back constituencies and votes.

This book was probably intended as part of the Brexit debate and certainly not coming from a left perspective. But, ironically, given the position of its author, it puts paid to many of the unsavoury ‘theses’ from the Right doing the rounds post-Westminster attack on 22 March. The assailant was no immigrant, he was born here; he was no part of a ‘backward’ Muslim community, he was from Tunbridge Wells. Moving from place to place, even working abroad, he was, in his way, very much an Anywhere man. What a nonsense such a typology is then.

Hm, I listened to the author describe this notion of somewheres and anywheres in an interview and I think it has a lot more usefulness as a way of understanding seemingly contradictory positions than you give it credit for.

Is it an over arching explanation of the current state of Britain-no, has it been linked to the economic impact of neo liberal globalisation-no………but this shouldn’t stop the notion of somewhere and anywhere people being a useful part of the analysis of why we are where we are.