Two new anthologies of pieces from the magazines Race Today and Race & Class recall important struggles on the streets, the factory floors and in communities, linking them to both class and global internationalism.

It is salutary that at a time when racism is getting redefined in some sectors and official investigations as identity loss, unconscious bias and microaggression, we are reminded just how connected the struggle against racism was in the 1970s and ‘80s to class, to exploitation, state power and to liberation movements. It is significant that two new collections, A. Sivanandan’s Communities of Resistance: writings on Black Struggles for Socialism (Verso, 2019) and the new Race Today anthology, Here to Stay, Here to fight (Pluto press, 2019), come from magazines that were radicalised into political tools during the heydays of the 1970s.[1]

Race Today had started life as the Institute of Race Relations’ (IRR) 1960s bland, upright, uptight A5 IRR Newsletter, telling of ‘race’ policy developments. In late 1969 the IRR decided to change it into a monthly illustrated magazine Race Today. And after the internal struggle to change IRR in 1972,[2] it was decided that the magazine was too hot a political potato and a new (non-charitable) organisation Towards Racial Justice (TRJ) was created to publish Race Today; and activist and Mangrove protagonist Darcus Howe appointed its editor. As funding was removed from IRR from traditional sources, since it was seen as dangerously radical, all departments now worried about paying wages and rent. TRJ decided to do a flit from Kings Cross to Brixton where the now Race Today Collective was to squat at 74 Shakespeare Road as an independent body.

Meanwhile back at the ranch, as we had to negotiate to move into the basement (subject to floods and rats) of our building, we were also transforming another bland journal, the academic RACE, then published by Oxford University Press into Race & Class – a journal for Black and Third World liberation. What is fascinating is the fact that Darcus Howe and Sivanandan (now IRR director) both scholarship boys of the colonies were also schooled in Marxist Leninism and saw in a magazine their Iskra. Editorials in 1974 spelt out their respective visions. Howe wrote,

‘Our task is to record and recognise the struggles of the emerging forces as manifestations of the revolutionary potential of the black population. We recognise too the release of intellectual energy from within the black community, which always comes to the fore when the masses of the oppressed by their actions create a new social reality.’[3]

Sivanandan, editor of the other transitioning journal, wrote about the role of academics and thinkers in holding back social change,

‘a scholarship that engenders a colonialism of the mind, brings credibility to power, and helps further to enslave the oppressed and the exploited. The function of knowledge … is to liberate – to apprehend reality in order to change it.’[4]

If there were a rift between the two magazines and their editors, it was possibly around the notion of organisation. Howe, a relative of CLR James,[5] was a proponent of mass self-organisation and viewed Sivanandan’s more classic Marxism as an old-fashioned vanguardism. Such nuanced differences probably look ridiculous now in hindsight, and certainly if you examine the two collections there is significant overlap in subjects covered: e.g. Grunwick, Broadwater Farm, Notting Hill Carnival, the black middle class, and in terms of contributors: such as Linton Kwesi Johnson, John La Rose and Walter Rodney.

The two collections both reflect the times in which they were written and present the struggle against racism as a militant and material one. But the books are somewhat dissimilar. The Race Today anthology, Here to Stay, Here to fight, carries some fifty-five different pieces, many of them short, from a variety of contributors to the monthly from Howe, Farrukh Dhondy and Linton Kwesi Johnson to US-based Toni Morrison, Martin Glaberman and David Roediger. Communities of Resistance: writings of black struggles for socialism, on the other hand, is a reissue of a 1990 collection of eleven analytical articles, all by Sivanandan. These are topped and tailed by an interview with the late author, and a newly-commissioned preface from Gary Younge and Introduction by Arun Kundnani plus a bibliography of Sivanandan’s writings.

Most of the pieces in the anthology Here to stay, Here to fight were originally published between 1974 and 1988 in Race Today and have never seen the light of day before as a collection. Gathered into chapters on British politics, ‘Youth in revolt’, ‘Sex, race and class’, Asian workers’ struggles, British (in)justice, culture, Third World liberation and ‘Legacies’, it gives an excellent taster – sometimes story-telling, sometimes analyses, sometimes record, sometimes poetry – of the hard-fought struggles and creative ripostes of those times. 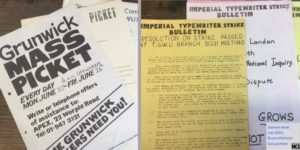 Here we learn about campaigns against policing from Brockwell Park (1973) to Broadwater Farm (1981) the Bradford 12 (1982) and Jackie Berkley (1985), against trade union racism at Imperial Typewriters (1974) and Grunwick (1977). Some stories such as that of ‘The New Cross Massacre’ are well known; others like the East End’s Bengali Housing Action Group (1977) have been relatively unsung. This collection acts not just as record but also provides a political flavour of how racism was conceived and how struggle was enacted, when Black, like, Red, was a political colour.

Most importantly, Race Today was not just a magazine foregrounding ‘the voices of the protagonists’, its Collective was also a mobiliser – most notable for the unique Black people’s Day of Action through London in March 1981 following the New Cross fire, and the mass squat in Tower Hamlets (1975-77). In 1982, it, with Bogle L’Ouverture (Jessica and Eric Huntley) and New Beacon Books (John la Rose et al), got the annual International Book Fair of Radical Black and Third World Books off the ground.  For Race Today ‘saw culture and politics as inseparable’; its writers ‘argued that liberation movements and cultural movements emerged hand-in-hand’ with for Dhondy, ‘the conscious interplay of political and material reality with the act of creation and the lives of the creators’. The creative took in participating in Notting Hill Carnival as well as producing annual Race Today Reviews which showcased the work of black artists, novelists and poets. 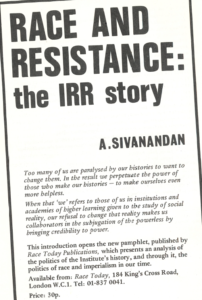 If Here to stay, Here to fight showcases the issues, campaigns and people of the time, Sivanandan in Communities of Resistance provides the lenses through which to view them. To give the magazines their due, they both saw racism as inextricably bound up to class, eschewed divisive ethnic nationalism and espoused internationalism. But in Sivanandan’s eleven ‘influential essays’ (which all appeared in Race & Class) these concepts are analysed in depth. He considered himself a pamphleteer, a kind of agitator-cum-educator-cum-organiser. For him the key was that racism did not stay still but changed its shape and form according to external conditions; and that meant weighing up the forces and changing the fights. The collection starts with his excoriating polemic against Thatcherism and a section of the Left ‘The hokum of New Times’ and takes in his ‘ground-breaking analysis of the newly emerging world of globalised capitalism’, ‘New circuits of imperialism’ and his vision of the impact of 1992 and Fortress Europe.  The central part of the book is devoted to black struggles in Britain, where he challenges both state policies (whether in brutal policing, racist immigration controls, or the velvet glove of multiculturalism) and also the way black struggle was being degraded by politicians and a section of the middle class buying into state blandishments and ‘awareness training’ remedies. For him ‘The means are the ends…there is no socialism after liberation, socialism is the process through which liberation in won.’ And his call for the need to build ‘Communities of Resistance’, first articulated in Hackney Town Hall in 1991, was, in the light of what we see happening today, particularly prescient. These two books, despite their different formats, complement one another. Here to Stay is written from the fray, Communities of Resistance has more wisdom ‘recollected in tranquillity’. But both stay true to a wholistic politics which sees liberation as indivisible.

Darcus and Siva would probably both laugh me out of court for suggesting these (subversive) books as invaluable Christmas presents – but please do buy them. They are what the times demand. 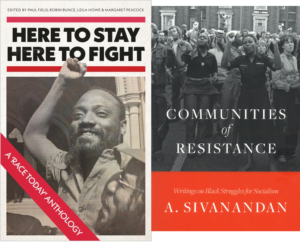 Complete backfiles of Race Today from March 1969 to March 1079 and of Race & Class are available to consult in the IRR’s Black History Collection. Race & Class is also available online.

Communities of Resistance: writings on black struggles for socialism, by A. Sivanandan, Verso, 2019 £16.99 available on special offer from IRR at £12.99 (excluding delivery).