Humanitarian volunteers detained in Lesvos must be released

Meena Masood, Seán Binder’s partner and member of #FreeHumanitarians, calls for solidarity and support for the three humanitarians arrested and detained in Greece since August.

On 20 October, protests took place in Dublin, Berlin, London, Boston and Stockholm in support of three humanitarian volunteers currently detained in Greece. Seán Binder (24), Sarah Mardini (23) and Athanasios Karakitsos ‘Nassos’ (37) were arrested in August on numerous serious criminal allegations including espionage, illegally assisting ‘aliens’ into Greece and being part of a criminal organisation. Seán and his colleagues all worked for the organisation Emergency Response Centre International (ERCI), a Greek not-for-profit set up in 2015 to offer assistance in humanitarian crises and natural disasters. They all, supported by ERCI founder Panos Moraitis, adamantly denied the charges. Seán and Sarah have now been detained for ten weeks despite not being officially charged and having no criminal convictions. 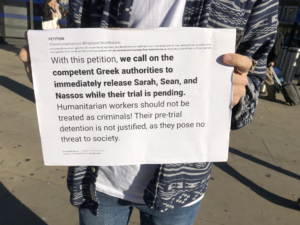 The decision has been made to hold them until their trial, for which no date has been set. Greek law allows for up to eighteen months’ pre-trial detention. The authorities’ justification for this is that Seán and his colleagues will continue their alleged criminal activities should they be released. Additionally, as Seán and Sarah are not Greek residents they are presumed to be flight risks. For these reasons an application for their release was rejected in September, despite large campaigns supporting their innocence, and a lack of evidence proving their guilt.

Entrenching the criminalisation of solidarity

Seán and his colleagues are ‘collateral damage’ in the effort to secure European borders from those fleeing conflicts, to be held up as examples of what can happen when these efforts are undermined. This is because solidarity and search and rescue action are becoming criminalised; boats carrying refugees are being turned away and hundreds continue to drown trying to reach safety. The current EU ‘migrant crisis’ (the worst since World War II) has been met with the criminalisation of non-governmental organisations (NGOs) and individuals such as Seán who work for them, in an effort to tackle the perceived threat from smugglers. Indeed, simply using the term ‘crisis’ evokes a securitised and militarised response. Migrants at sea are reduced to ‘potential fake refugees, as concealed terrorists or as traffickers’, and NGOs’ operations assisting refugees are described as ‘pull factors’ encouraging more migration. This is all despite research proving there is no correlation between the operation of NGOs and the number of arrivals. 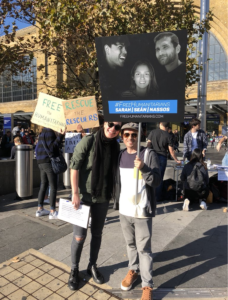 There is now an effort to enshrine the criminalisation of solidarity and search and rescue in European law, although the obligation to help those in need at sea and the right to seek refuge is enshrined in international law. These obligations and rights have been sacrificed by the efforts to strengthen national borders and ‘fortress Europe’. The militarised response and corrosion of human rights is embodied in agreements made with states such as Turkey and Libya, now deemed ‘safe’ despite suffering similar structural problems to those countries which produce refugees. It also signals that in an effort to secure its borders Europe will make whatever deals it deems necessary. The EU’s response has led to the corrosion of human rights. For instance the Moria camp, where Seán and his colleagues volunteered, is severely overcrowded and is known as the ‘Guantanamo Bay of Europe’ due to the inhumane conditions asylum seekers suffer there. The situation remains so dire that people have died. Neither Seán, Sarah nor Nassos volunteered in order to challenge the authorities; rather they were trying to help prevent suffering. In Seán’s own words, ‘We refuse to accept that pulling families out of European waters is illegal. Whether you’re on the right or left, nobody should accept that parents cling to the cliffs at the edge of Europe in the middle of the night while their children go into hypothermic shock’.

Seán is an honours graduate from Trinity College Dublin and the London School of Economics (LSE). Additionally, he is a trained and certified rescue scuba diver and has advanced search and rescue training. He came to Lesvos, Greece, in October 2017 after finishing his masters at LSE. Sarah Mardini, a Syrian refugee and competitive swimmer, shot to fame alongside her younger sister Yusra in 2015 when they helped swim their broken boat to Greece carrying eighteen fellow asylum seekers. Sarah is a scholarship student enrolled at Bards College in Germany. Before her arrest she expected to continue her studies in September. Nassos is a veteran of the Greek army, who volunteered in 2015 to help rescue refugees fleeing to Greece. He was shortlisted for the international Maritime Rescue Federation HERO award. Their friends and families have been tirelessly campaigning for their release. 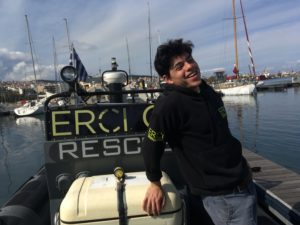 Their efforts have led to thirty-nine MEPs co-signing a letter to the Greek authorities stating that Seán and his colleagues are not a threat to society and ‘should not be treated as criminals’. Moreover, an open letter was signed by sixty organisations including Oxfam, Solidarity Now and the Greek Council for Refugees, detailing their concern that Seán and Sarah’s arrests are indicative of the criminalisation of solidarity. Human Rights Watch has also published a statement claiming that an ‘analysis of court records suggest these charges are unfounded and reflect a worrying trend that seeks to criminalise humanitarian activism’.

How you can help

The campaign to release Seán and his colleagues continues. Information on how people can help can be found here. A petition aimed at the relevant Greek authorities, which has over 7,000 signatures and calls for their release, can be signed here. Additionally, they are asking supporters to write letters to their MEPs, in the hope that enough attention will allow them to be released promptly.

Read about similar prosecutions of solidarity action such as: ‘Moria 15’ and Team Humanity and Proem-aid