‘I’m mad as hell and I’m not going to take it anymore!’: a guide to the Gilets Noirs

We are providing all you need to know about the Gilets Noirs and its continuing fight for the rights of undocumented people in France and beyond.

In November of 2018, French President Emmanuel Macron announced the introduction of a fuel tax that would disproportionately affect those on lower incomes (those in the bottom decile were to be taxed 5 times more heavily). In response, the French took to the streets and so began the now famed, Gilets Jaunes movement. At around the same time, but with far less media coverage a group of undocumented workers in France met for the first time – they were to become the Gilets Noirs.

Who are the Gilets Noirs

Originally a relatively small organisation of ‘sans-papiers’, the Gilets Noirs have, over the last 10 months, expanded into (in their words) the largest collective of undocumented workers in France. Taking their inspiration from the Gilets Jaunes they chose their name to highlight the racism and exploitation of the French state. The Gilets Noirs do not need to don a tabard to highlight their invisibility and silencing by the state, their vest is their face. 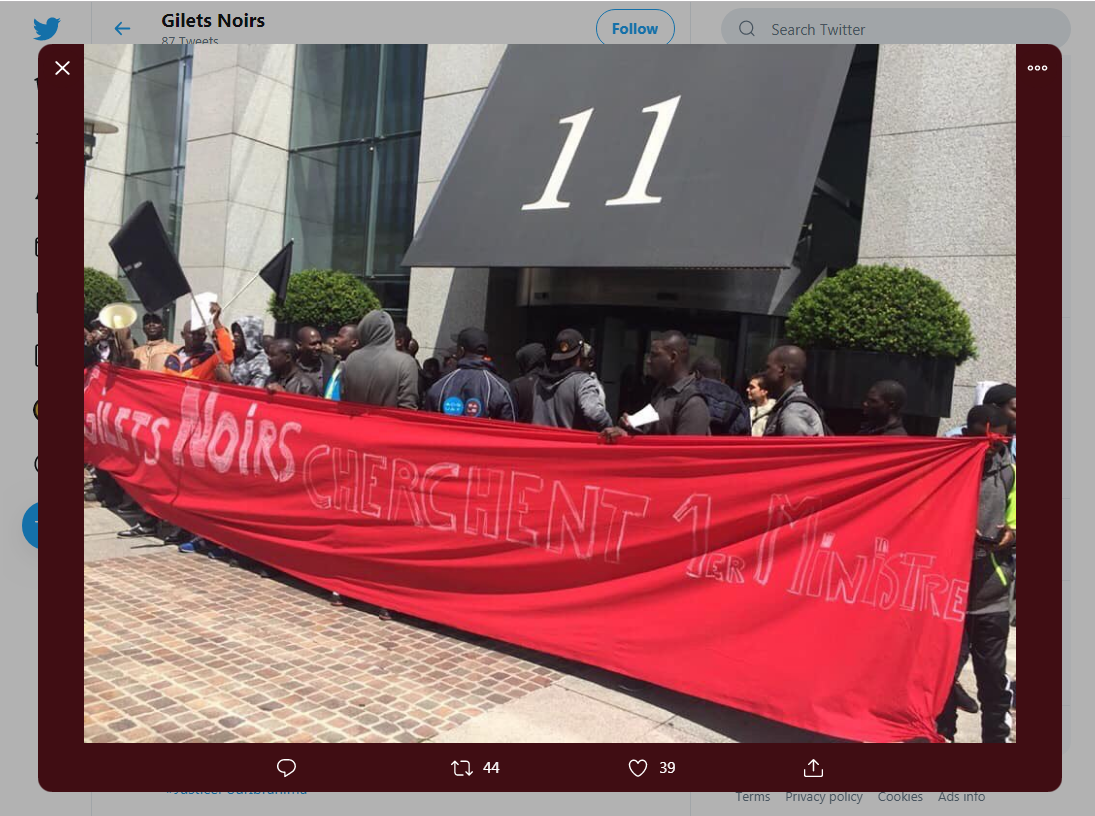 Although an open group for all undocumented people, the members of the Gilets Noirs are predominantly from the likes of the Ivory Coast, Senegal, Mali, Burkina Faso, Benin and Niger (France’s former African colonies) many of whom have been working in France in precarious and exploitative conditions for years. The imperial connection between France and the Gilets Noirs’ home countries is one of the things that makes their movement so powerful. The usual tropes and arguments that significantly ‘other’ immigrants (go back home, where are you from?) are complicated by the imperial connection – many of the members of the Gilets Noirs have family members who fought for France during the Second World War. Although this is a common issue for colonial and former colonial migrants throughout Europe, this is more complicated in France as France refuses to see ‘race’ at a legislative level and places a premium on its notion of a ‘colourblind citizenship’ in the ‘indivisible republic’. This hypocrisy is one of the key elements of the Gilets Noirs’ fight and has influenced how they have organised.

How the Gilets Noirs challenge French views on ‘race’

France has, within Europe, a uniquely complicated relationship with ‘race’. Since the Revolution and its rallying cry of ‘Equality, Solidarity and Fraternity’ the French narrative has constructed the colourblind nation. Instead of organising around ethnicity/race lines France was/is divided between foreigners and citizens. Under this model the French state upholds the belief that ‘race has no scientific basis’ and that we are all part of the human race. The depth of this belief was seen in 2013 with the decision to remove the word ‘race’ from French legislation. However, what the Gilets Noirs movement, as well as others against police brutality and racial profiling (such as Justice pour Adama), show is that the removal of the word does not remove the effects of racism. As Lionel Tardy said in 2013 in response to the word’s removal: you ‘can’t change reality just by changing words… [you are] wasting time and energy on illusions.’

Mobilising for the ‘undocumented’

Since November 2018, the Gilets Noirs have held ever larger demonstrations targeted at locations that exemplify their exploitation and silencing. They have consistently chosen symbols of the French state that encompass the utopian national narrative. Their first action was held at the Musee d’Immigration in Paris – a building erected for the 1931 Paris Colonial Exhibition to house artefacts from Africa and Oceania, a bastion of French imperialism. Their second action was held at the Comedie Française, France’s national theatre (the world’s longest established) and previous known as the ‘House of Molière’ a playwright adored by the court of Louis XIV.

Then in May 2019, the Gilets Noirs held their biggest protest, that finally gave them the headlines they needed and the recognition they deserve. Hundreds occupied Terminal 2 of Charles de Gaulle Airport, Paris – chosen because it is where the headquarters of Air France are located and from where the majority of EU flights depart. The action was used to highlight the disparity between the open borders enjoyed by EU citizens, that allow them to ‘pass through showing only their official documents’, cheaply and easily travelling across borders, whilst below them, in the basement, are the deportation holding cells where people are ‘threatened, handcuffed, gagged and insulted by the police’. The Gilets Noirs are clear in their views and their analysis, they are throwing into stark relief the effects of Fortress Europe that cuts the world sharply into the ‘haves’ and the ‘have nots’. 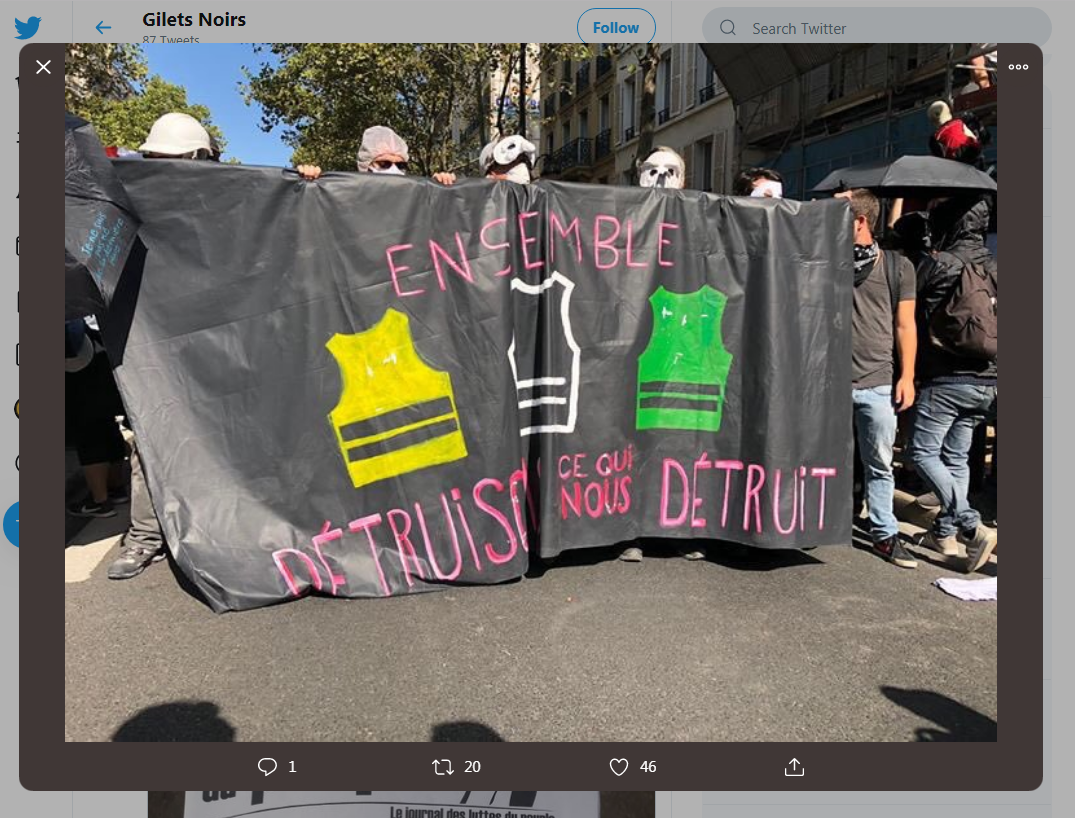 Another significance of the CDG airport action, in addition to it putting the Gilets Noirs on the map, is that they were calling for solidarity from everyone to oppose deportations and demand that the state stop prosecuting the ‘sans-papiers’ (those without papers). This was the moment that the Gilets Noirs was seen as the expansive movement it is. It could not be dismissed as a single-issue movement of a disenfranchised minority. Although a key component of their fight is a residence amnesty, that would allow all undocumented people to access health care and job security, their fight is much broader than this. They are also fighting against homelessness (there are thousands on the streets of Paris at the moment), the lack of work and economic security more broadly in France, police repression and deportations and the detention system. This is a movement led by the undocumented but fighting for rights that will improve the conditions for many more and asking for solidarity and assistance from the rest of society.

In June, the Gilets Noirs occupied the headquarters of Elior, a cleaning and catering multinational. Taking their fight from the symbolic institutions of French imperial power to the very real and current sites of exploitation conducted by global conglomerates. They accuse Elior of knowingly employing undocumented people so that they can be forced to work in dangerous conditions, exploiting their legal status.

The fight against Elior continued over the summer and on the 11 October the Gilets Noirs with the assistance of the CNT-SO (CNT Workers Solidarity) launched legal proceedings against Eloir with the Labour Courts. They have filed seven cases suing Elior for €80,000, with 197 further cases ready to be submitted during the second negotiation, for their ‘racist exploitation of undocumented workers’. 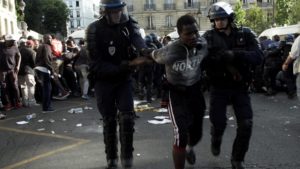 Then in July, the Gilets Noirs held their most daring action yet: they occupied the Pantheon in Paris. The Pantheon has a long history with the French state and is the site where the remains of distinguished French citizens (i.e. Nobel Peace Prize winner René Cassin, physicists Marie Curie and the French resistance leader Jean Moulin) are buried. The Gilets Noirs used the peaceful occupation of the Pantheon to call for a meeting with prime minister Edouard Philippe and distribute leaflets to passers by. The action received widespread media coverage but was met with violent police repression. There were many arrests and injuries after the police dressed in riot gear stormed the area. In response the Gilets Noirs have again called for solidarity from French citizens and created a defence fund. Hosted on le pot solidaire, they are campaigning to raise money so that anyone arrested during one of their actions has the ability to pay for bail and a defence should the case go to court.

Why this goes beyond France

The Gilets Noirs have ignitied a debate about resident rights, the exploitation of undocumented people and, by extension, interrogated EU citizenship rights. Recently, there have been protests in Belgium and Italy by undocumented workers demanding the right to work and work in safety. And last year the Permanent People’s Tribunal held a hearing in the UK on the Rights of Migrant and Refugee People, which brought together hundreds of people from across Europe to give testimony on their experiences. A movement like this is so important at a time when white nationalism and nativism is sweeping across Europe. In this world the Gilets Noirs are a significant movement because they are giving a voice to the silenced and highlighting the hypocrisies of Fortress Europe that allows for free movement for some and arrest and detention for others.

Donate to the solidarity fund here