Institutional indifference – in life and death

The treatment of a homeless French man who died in immigration detention makes grim reading and shows up a callous system.

On 26 September, nearly two years after the inquest, the Prisons and Probation Ombudsman (PPO) published a fatal incident report into the death on 6 December 2011 of an unnamed 40-year-old French man in immigration custody in a west London hospital. He had been held at Harmondsworth Immigration Removal Centre (IRC).[1]

The man died after coughing up massive amounts of blood – as the result of a tuberculosis (TB) infection. The report contains few details about him, except that he was homeless and known to a charity caseworker for ‘sitting in the same spot in Marble Arch in spite of inclement weather. He wore the same clothes for six months.’ 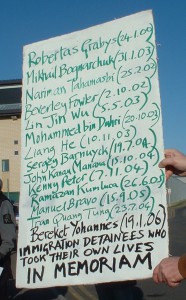 He came to the attention of the UKBA on 22 July 2011 and was issued with a ‘Minded to Remove’ (MTR) letter and warned that he was liable for removal because, even though an EU citizen, he was not in employment or education. He was told to report for an interview at Charing Cross police station but failed to turn up. He was arrested in the early hours of 11 November during a joint operation at Hyde Park by the Met police homeless unit and the UKBA, and taken to Harmondsworth. There he was found to be covered in lice and was observed coughing. He was held in an isolation room at Harmondsworth and his return to France was arranged. But on 16 November, he was taken to hospital (in handcuffs attached to a guard by a six–foot chain) and diagnosed with TB. On 22 November, a health care manager at Harmondsworth emailed the immigration team about his illness asking them to consider release. There is no recorded response. During the thirteen days in hospital when he was ‘very weak and on a drip’ he was ‘escorted’ the whole time by two GEO Group Inc detention custody officers (DCOs) – and whenever he left the room he was shackled by the chain to a guard. Then on 28 November he was discharged back to Harmondsworth, though hospitalised again four days later. Ultimately, following a request from hospital medical staff, his handcuffs were removed and the two DCOs were posted at the door to his hospital room, where prolonged coughing caused him to bleed heavily, resulting in his death.

The UKBA appeared only interested in the man’s fitness to fly and removal, and apart from the solitary manager in the healthcare unit at Harmondsworth who did not consider him fit to be detained, ultimately no one cared.

A clinical review of the care he received at Harmondsworth was commissioned by the PPO, who, though he did not think the death could have been prevented, was critical of the fact that a rough sleeper with a cough and body lice was not better observed for possible TB. The PPO had concerns over the use of restraint when the man was admitted to hospital for the second time and that attempts were not made to assess the risk he posed or consideration of infection to staff.

The report is critical of the UKBA and Harmondsworth staff (GEO Group Inc) for failing to find and inform the man’s family – this was left to French judicial authorities, although the man had given Harmondsworth staff contact details for his parents in France, and they were also contained in his passport, which was in the possession of the UKBA. Neither organisation showed any support for the family or made any effort to return the body or tell the family about financial assistance for that.

Seven PPO recommendations end the report, with responses from the UKBA and the GEO Group Inc reassuring the concerned world that everything is in place to ensure that the same mistakes are not repeated. But, unfortunately, the lesson we get in such cases is that human life seems to have little value to the UKBA/Home Office/PPO or the private corporations running such places of misery. It took the UKBA five months to provide details of the man’s immigration status to the PPO investigator. PPO letters asking detainees to come forward with information were delayed or not acted on, and a key witness was deported. Interviews by the PPO were not conducted till five months after the man’s death. That such reports take so long to publish is also very worrying, particularly as the inquest was held in October 2012. The PPO has yet to issue its report into the death of Brian Dalrymple in July 2011, although his inquest concluded in June 2014.[2]

Care, responsibility and accountability seem to go out of the window when it comes to those considered disposable in our society.

Read an IRR News story: Another death at Harmondsworth

[1] The GEO Group Inc ran the centre at the time of the death and healthcare provision is further subcontracted to a company called Primecare (whose conduct has been criticised at two recent inquests into the death of men who actually died at Colnbrook but had been held at Harmondsworth – Brian Dalrymple and Muhammed Shukat). The contract to operate Harmondsworth (and Colnbrook) was taken over, in September 2014, by another large corporation, Mitie (which also runs Campsfield IRC in Oxfordshire). [2] See ‘Neglect verdict at Brian Dalrymple inquest’, Corporate Watch, 28 June 2014.

Disgusting treatment,nothing surprises me nowadays,only interested in deporting this E.U citizen,who was obviously down on his luck and his only need was probably some compassion and obviously some medical care,this countrys well gone too the dogs..