In the blizzard of coalition measures wreaking destruction on living standards, the justice ministry’s proposals on legal aid will once again bear down hardest on poor BME, Muslim and migrant communities.

From the introduction of a residence test for civil legal aid, to the withdrawal of public funding for challenges to mistreatment in prison and for the preparation of judicial reviews, the huge fees cut in immigration and asylum appeals, to the massive changes of funding in criminal cases including the introduction of price-competitive contracting and a fee structure encouraging pressure on defendants to plead guilty, the proposals in the ministry of justice consultation paper[1] target those in the greatest need of public funding.

Criminal legal aid – from Silk to the ‘Mclawyer’

The proposals which have brought criminal lawyers out on strike, and protesting on the streets of London and other major cities, relate to price-competitive tendering for criminal legal services contracts. They are designed to slash £220 million from the criminal legal aid budget on top of the £320 million cuts to civil legal aid in April. The ministry of justice proposes to replace 1,600 high-street and specialist criminal defence firms with 400 large contractors which need not have any experience of delivering legal services, and which will be selected to provide regional criminal legal services on the basis of price. Tenders must be at least 17.5 per cent lower than current contracts, and the lowest bidders will win. The trucking firm Eddie Stobart’s legal subsidiary, Stobart Barristers, which cuts out solicitors, is a leading contender for the contracts.

The ministry does not dispute that the replacement of specialist criminal defence lawyers by cut-price lawyers will result in a fall in standards of legal services, which contracts will require to be merely ‘adequate’. The proposals will also do away with legally-aided defendants’ right to a legal aid solicitor of their choice. As lawyer and former Camden Council leader Raj Chada observed, ‘the state prosecutes you, the state will allocate the lawyer to defend you … it is a proposal worthy of the Soviet Union at its most dictatorial’.[2]

The loss of choice of lawyer for those charged with criminal offences will lead to the destruction of the lawyer-client relationship. This relationship, and the importance of complete trust and confidence, has been acknowledged by the European Court of Human Rights as the foundation of a practical and effective right to a fair trial, protected by Article 6 of the Human Rights Convention.[3]  Leading judges in countries with a common-law tradition such as Canada have also referred to this: ‘There should be no room for doubt about a counsel’s loyalty and dedication to the client’s case.’[4]

For no-one is this more important than for defendants charged with politically or socially sensitive crimes, such as those charged with terrorism offences – from the Irish in the 1970s to young Muslims in the past decade – or black youths charged with offences arising out of the riots, or charged with knife crime as part of a ‘joint enterprise’.  It is of paramount importance to the system of justice that such defendants can be absolutely confident that their ‘brief’ is doing his or her utmost to represent the client’s case fairly and vigorously. It’s not hard to foresee the disastrous consequences if no such confidence exists, if defendants know that they can expect ‘conveyor-belt’ representation by poorly paid, overworked, inexperienced and uncommitted corporate employees (‘Mclawyers’) who do not expect to see the client again after the trial ends.

This disastrous destruction of confidence is to be exacerbated by a ‘standard fee’ structure which will pay the lawyer the same for a guilty plea as for a three-day trial, building in huge incentives to pressure the client to plead guilty. No defendant advised to plead guilty by a ‘Mclawyer’ can be confident that the advice is legally sound and not motivated by the profit incentive. 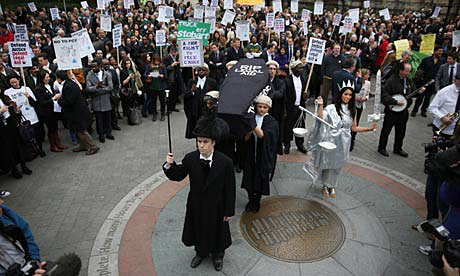 At a mass protest-cum-funeral procession outside parliament on 22 May for the imminent death of legal aid, complete with coffin, undertaker in black-feathered hat and New Orleans jazz band and attended by over a thousand lawyers, Clive Stafford-Smith of Reprieve warned that the proposals would lead to the sort of sub-standard justice delivered by sub-minimum wage public defenders in the US. Gerry Conlon of the Guildford Four, who spent fifteen years in prison for alleged IRA terrorism before being cleared in 1989, pointed out that he would not have been released without the efforts of dedicated legal aid lawyers, and members of Jean Charles de Menezes’ family reflected that they would never have got justice. Courtenay Griffiths QC added that many small non-white firms will be wiped out, reversing the strides towards more BME representation in the legal profession and making the courtroom an even whiter and more hostile place for black defendants.

While it is the proposed changes to criminal legal aid which have had the lion’s share of media coverage, the proposals to cut civil legal aid, coming on top of the drastic cuts which came into force in April, will have an equally grave impact. The proposed residence test will restrict foreigners’ access to legal aid for civil cases to those legally resident in the UK for a year or more and to asylum seekers. The restrictions will mean that undocumented migrants, and recently arrived legal migrants, will have no legal aid to challenge any kind of illegal treatment, whether wrongful refusal to provide medical treatment or accommodation, other illegal and abusive actions by employers, landlords, health authorities or police, or months or years of unlawful detention by the Home Office.

The Human Rights Convention requires that everyone who is detained must have access to a court to challenge their detention, and the European Human Rights Court recognises that public funding may be necessary to enable rights to be practical and effective, rather than theoretical and illusory. It is likely that the Court will rule the withholding of legal aid from foreigners in such a situation to be unlawful – if the UK is still a subscriber to the European human rights system by then.[5] To human rights lawyers, it is extraordinary, and shameful, that such restrictions are being proposed in the twenty-first century, by the justice minister of the nation that boasts the writ of habeas corpus, a common-law remedy requiring those detaining someone to prove the detention lawful, which pre-dates the 1215 Magna Carta and was used in the 1772 Somersett’s case to free a slave from his American masters.

The residence test means no legal aid, either, for those seeking redress for torture by British forces in Iraq, Kenya, Cyprus and elsewhere; no legal aid for those such as the Libyan former dissidents, now in government, alleging British involvement in unlawful rendition – in other words, effective impunity for British state agents involved in the worst forms of international crimes including abduction, murder and torture abroad.

Closed institutions, whether prisons, mental hospitals, care homes or immigration removal centres, harbour much unchallenged institutional cruelty, racism and brutality, as undercover investigations often demonstrate. It is particularly important that legal aid is available for inmates to get independent legal advice and help to challenge abuse, and the withholding of legal aid so that prisoners cannot access such independent help leaves them with no redress. The pettiness of the measure is only eclipsed by its stupidity, as it is bound to ratchet up tension in prisons and to make life more difficult for staff as well as inmates. It goes without saying that BME prisoners are over-represented in the criminal justice system, and so will be disproportionately affected.

Wearing down the lawyers

Other proposals make legal aid lawyers do more work for less money. A fee cut of 35 per cent in immigration and asylum appeals, coming on top of a whole decade of cuts in this field, will make the work simply unviable for many if not most of the surviving legal aid immigration and asylum lawyers, leaving many more asylum seekers and other vulnerable people unrepresented on appeal against bad Home Office decisions. Many of them will be at risk of serious, perhaps fatal harm if returned home, but without legal help, will be unable to prove their case; as a number of studies have demonstrated, legal representation makes a big difference to the prospects of success.[6]

Another proposed ‘reform’ which will have very serious adverse effects on the justice system and on the rule of law in the UK is to make lawyers bear the costs of preparing judicial reviews, only paying them through legal aid if they are granted permission to proceed by a judge. (Judicial review claims are screened by a judge, who only grants permission to ‘arguable’ claims, ie, those with a good chance of success.)

The system of judicial review of administrative actions has developed over centuries in Britain and has been described by a leading public lawyer as a ‘tightly controlled, quick and relatively cheap procedure … seen the world over as one of our greatest legal contributions of recent years’.[7] Through judicial review, delays and denials of justice, detention which is excessive or contrary to policy or not properly supervised or reasoned, unreasonable or unfair decisions by government are challenged. Two-thirds of judicial review cases relate to immigration or asylum cases. They might be about detention; refusal to admit a fresh claim; charter-flight removals of refused asylum seekers to dangerous countries; irregular policy or rule changes; or the revocation of a college’s license to teach foreign students. They are all about bringing officials, ministers and government departments to account.

Prime minister David Cameron and justice minister Grayling attacked judicial review recently, proposing court fee hikes and tightening deadlines for applications to deter ‘unmeritorious’ claims.[8] Lawyers criticised their arguments then as bizarre and not based on evidence.[9] Grayling now justifies the new proposal to make lawyers bear costs by recourse to some very misleading statistics. He claimed that only 144 of the 11,359 judicial review claims brought in 2011 were successful. In fact, as researchers at the Public Law Project have demonstrated, a high proportion (at least a third) of claims are settled, generally by the decision-maker withdrawing the impugned decision, before permission is granted. Another large proportion settle following the grant of permission, so that, taking into account those who win in court (a small number in absolute terms but a good proportion, 40 per cent, of all fully argued cases) and those who achieve the same result through settlement, around half of all judicial review claims result in a successful outcome for claimants.[10]

The package of proposals seem designed to split the lawyers, pitting solicitors against barristers and the private sector against the public, legally aided sector. But so far lawyers are united in anger at the potential destruction of legal aid. In addition to the demonstrations, strikes and public meetings to defend the right to legal aid, called by a large coalition of practitioners’ groups, ninety QCs including former Director of Public Prosecutions Lord Macdonald, Baroness Kennedy and Cherie Blair wrote to the Daily Telegraph condemning the Grayling proposals as unjust. ‘We are gravely concerned that practical access to justice is now under threat. The cumulative effect of these proposals will seriously undermine the rule of law, and Britain’s global reputation for justice … They will leave many of society’s most vulnerable people without access to any specialist legal advice and representation.’[11]

The coalition, Save Legal Aid, is calling for all concerned people (not just lawyers) to respond to the consultation by the closing deadline of Tuesday 4 June, and is calling a demonstration outside the justice ministry at 4.30pm on that date to keep up the pressure to get the proposals withdrawn.