The re-publication of this Indigenous Peoples’ history book by Indigenous human rights advocate Roxanne Dunbar-Ortiz as an explicit teaching aid is very timely. The well planned and thoughtful adaptation opens out the more formal historical narrative of the original 2014 edition to a much wider audience.

‘For Young People’? Indeed. But older (and even very much older) people will find its non-patronising engaging style a great aid as introduction or supplement to past study.

Don’t misunderstand. Dunbar-Ortiz’s original version was already a great step forward. In some 250 pages arranged in a dozen chapters she brilliantly summarised US history. She started with the pre-Colombian background before tracing the bloody beginnings of English colonisation, how it spilled over into attempted genocide, which was then continued during the US’s establishment and expansion. This adapted version follows this sequential pattern, but is written and presented in a way that encourages the younger and more general reader, through questions, guidance and illustration, to explicitly reflect and learn.

Also, as the new version is five years after the original, the last two chapters serve as a summary of the recent struggles of Indigenous Nations, and a more immediate restatement of the ongoing character of the history of resistance and rebellion. 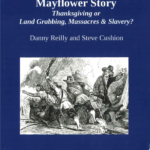 Here in the UK, we are, coincidentally, faced with a widely promoted attempt to introduce education about the very early colonisation undertaken by Britain in North America in the form of the Mayflower 400 Commemorations. The relevance here in the UK of Dunbar-Ortiz’s book couldn’t be greater. Though the commemorations only officially start on Thanksgiving Day (28 November 2019), the education project part began in 2015 with a new Museum (The Mayflower Museum), a website and very detailed curriculum documents. The sanitised character of the Mayflower education materials stands in stark contrast to the new US book.

The challenge for educators and others in using this book in the UK is a general lack of familiarity with colonial and US history. To be fair, the authors provide many notes and guidance clues in the book. Though it would be misleading not to suggest that some supplementary preparations might be needed from time to time for UK teachers, the effort will be well worth it. This is recommended reading for students to contextualise the 2020 Mayflower education with which they will be presented.

However, decolonising the curriculum is an ongoing task. This book will not only stand the test of time but influence education to make that time a time of change. It could also be used to challenge the colonial narrative that still predominates in the media.

I have parts of the Dunbar-Ortiz book and what shocks is the horrific treatment of the Christian Anglo settlers against the Natives through ruthless killings, burnings, alcohol, smallpox. Women & children were not spared. Here is a quote from the book (pg3): “Free land was the magnet that attracted European settlers.” and it was the same in Canada, Australia, South Africa, Latin America. Settlers? Land grabbers really.
The Anglos really believed they were entitled to brown & black lands anywhere. “The Natives lost the right to their own lands after Europeans arrived and claimed it.” Unbelievable.
“Settler colonialism is inherently genocidal through occupation, torture, sexual abuse, removals of native children to boarding schools. Absence of even the slightest regret in the annual celebrations.”
And of course there is no compensation & return of the land grabbed. What’s the UN for?