Chris Johnson and Andrew Ryder write about a new policy for Gypsies and Travellers which was quietly issued at the end of last month. 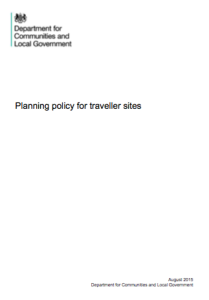 At the end of August the government issued a flurry of statements, such as the dissolution honours list, which included a number of controversial new additions to the House of Lords, and was issued on the same day that fresh immigration figures and data on deaths relating to benefit sanctions were released. Critics pointed out that the government was seeking to ‘bury bad news’. Amongst the ‘bad’ or contentious news at the end of August there was particularly bad news for Gypsies and Travellers.

On August Bank Holiday Monday 2015 the government issued a new policy on planning and Gypsy and Traveller sites, Planning policy for traveller sites (PPTS).[1] This PPTS replaces the previous version of the policy and came into force immediately. One of the most controversial new parts of this policy is that if a Gypsy or Traveller stops travelling permanently for health reasons or reasons of old age, they will no longer be within the planning definition of Gypsy and Traveller. It should be noted that the previous Secretary of State at the Department for Communities and Local Government (DCLG), Eric Pickles, had sought to instigate such change during the Coalition government but was thwarted by the Liberal Democrats, then partners in the Coalition, who shared the anxieties of Gypsies and Travellers and their supporters, who felt the proposal was unfair and unsound.

The new Conservative government has wasted no time in reviving the proposal and it comes into force with immediate effect. But it is already proving to be extremely traumatic to Gypsies and Travellers, who feel that the government is unfairly trying to erase their identity and curb their traditional way of life. It appears that Gypsies and Travellers are being punished for the longstanding shortage of sites and stopping places which has been caused by central and local government inaction and failure. This has already forced some families to move into conventional housing much against their will and sometimes with very detrimental consequences, to escape the cycle of eviction and/or to access health care and/or education for their children.

The new PPTS includes measures that will restrict Green Belt site development. It should be noted that it is already difficult to obtain planning permission in the Green Belt for a site. To attempt to secure planning permission, Gypsy and Traveller families often have to demonstrate very special circumstances such as health or educational needs. The government is now stating in its new regulations that ‘personal circumstances and unmet need are now unlikely to clearly outweigh harm to the Green Belt’. Yet it should be noted that Gypsies and Travellers normally cannot afford to buy land within development boundaries and, in some areas, the only land that is realistically available is Green Belt land. The government is also seeking to discourage site development in general in the open countryside. It should be noted that the nearer a proposed site is to existing settlements the more intense local opposition can be to a site.

In addition a letter from the government’s Chief Planning Officer, was published simultaneously with the new PPTS.[2] The statement makes ‘intentional unauthorised development a material consideration’ in planning applications, meaning that if Gypsies and Travellers move onto land and initiate a retrospective planning application (unauthorised development) then such an action will count against them in weighing up whether to approve planning permission. Gypsies and Travellers and a wide range of experts have pointed out that unauthorised developments are a symptom of failed central and local government policies with regard to site provision. In other words if local authorities identified suitable land for site development and facilitated site provision (as advised to do so both in the old and new version of the PPTS) then Gypsies and Travellers would not need to instigate unauthorised developments. It is important to note that the Labour government’s policy which set regional targets for site provision was dismantled by the Coalition government. Coalition government proposals with reference to site provision encouraged local authorities to formulate their own evidence base for Gypsy and Traveller needs and to be responsible for setting their own targets for pitches.[3] However, the government has not monitored or benchmarked this process and, unlike the Labour government’s policy, there is no prospect of governmental intervention where plans are not in place or where plans grossly underestimate local need.

The letter notes that the government is particularly concerned about harm that is caused by intentional unauthorised development in the Green Belt and consequently the Planning Inspectorate will monitor all appeal decisions involving unauthorised development in the Green Belt and will consider the recovery of a proportion of relevant appeals in the Green Belt for the Secretary of State’s decision. This new recovery process will cover all planning appeals and not just Gypsy and Traveller cases. However Gypsies and Travellers are anxious that there may be a repeat of the discriminatory practices of Eric Pickles, who whilst Secretary of State, recovered for his own decision ALL Green Belt planning appeals involving Gypsies and Travellers. This centralist approach, which in fact contradicted the Coalition’s avowed policy of localism, was found to be discriminatory and unlawful in a High Court case in 2015 (Moore & Coates -v- Secretary of State for Communities and Local Government & London Borough of Bromley and Dartford Borough Council and Equality and Human Rights Commission [2015] EWHC 44 (Admin).[4] The letter from the government’s Chief Planning Officer also cancels the guidance for Gypsies and Travellers on unauthorised encampments which was issued in 2006.[5] The guidance stressed the essential need for welfare enquiries for agencies such as the police and local authorities in dealing with unauthorised encampments. Gypsies and Travellers and their supporters are deeply concerned that the absence of this guidance will increase the hardships for homeless Gypsies and Travellers through increased eviction. This measure was not mentioned, unlike the other government measures, in the previous consultation process and has not been subject to proper scrutiny, in particular an Equality Impact Assessment. The Travellers Advice Team at Community Law Partnership (CLP), a specialist law firm which supports Gypsies and Travellers, has described the termination of the guidance, in their newsletter TAT News, as ‘an outrageous back door policy change by the Government’.

Critics believe that the new regulations and measures, outlined above, may amount to discrimination under the Equality Act 2010 and constitute a breach of Article 8 of the European Convention (the right to respect for private and family life and home). The Equality and Human Rights Commission has announced that Gypsies and Travellers will now be a priority area of their work, and it is to be hoped that they will be proactive in monitoring and where necessary challenging the legality of the new provisions.

In the press statement which accompanied the new measures the Secretary of State, Greg Clark MP said: ‘I’m determined to ensure fairness in the planning system, so everyone abides by the same rules’. Housing and Planning minister Brandon Lewis said: ‘Unauthorised traveller sites can blight communities, causing misery for their neighbours and creating resentment that planning rules don’t seem to be applied fairly. Today’s revised planning policy clearly sets out the protection against unauthorised occupation and that the rules apply fairly to every community equally – no ifs, no buts.'[6] The rationale expressed in these statements has been evident in Conservative thinking on Gypsy and Traveller issues for the past decade and was apparent in Michael Howard’s 2005 ‘I believe in fair play’ adverts, which as part of the 2005 election campaign, implied Gypsies and Travellers unfairly benefitted from planning regulations. The current Conservative government’s notion of mainstreaming often rests on an assertion of fairness, such as in France where it is claimed that all, regardless of ethnicity, are citizens and are to be treated the same and enjoy equality. The danger though is that such arguments can be an excuse for inactivity. Furthermore, such mainstreaming fails to give policy the flexibility to dovetail with minority cultural patterns/exclusion and also fails to give policy the robustness to push through positive change where there is institutional and societal inertia and obstruction. Indeed groups like Gypsies and Travellers are at particular disadvantage through discrimination and need positive measures to enable them to overcome unfair obstacles and barriers.

The Conservative government’s interpretation of mainstreaming may ultimately bring it into conflict with the European Court of Human Rights (ECtHR). In the case of Chapman v UK, the ECtHR heard the case of an English Gypsy denied planning permission and in the judgement noted that:

Although the fact of belonging to a minority with a traditional lifestyle different from that of the majority does not confer an immunity from general laws intended to safeguard the assets of the community as a whole, such as the environment, it may have an incidence on the manner in which such laws are to be implemented … the vulnerable position of Gypsies as a minority means that some special consideration should be given to their needs and their different lifestyle.[7]

Dear Mr Johnson Ryder .
Its not that we don’t want to comment it is that we are affrade to say the wrong words. That’s how Gypsy and Travllers are they a frade to talk so that is wy we keep quiet always thinking that we are going to make things worse . When we speak the aforetys they twist are words and with haveing no education we can’t give answers very quickley it so difficult to know what you want to say and don’t know how to bring it out .

It is getting worse for my people we can’t move from grown to grown any more because the police will move us everyday we went Traveling last year around London then to Wales it was very difficult we did get a bit more time in Wales . But when you go away to hern a bit of money and you have to move every other day there’s no money coming in you need to feed the family have Disel for the vocals and generator some times we have to go from one Town to anther to do the washing all places don’t have a Laurndriett . When we are on the road I can go on and on about it some times we come back worse off then when we went some times we do better what makes things Easter in the winter .

I know it not the answer to all are problems but sites are the way forward. I would like to thank you on be haff of all my people I know you will do your best thank you God bless you all Johanna Price .

the truth is better than a lie always to know what

I can confirm that many Gypsies are homeless! These stories heard in Georgia, Tbilisi. A huge number of people live in small rooms. I am worried about a question: What do you think about the so-called Rome passports that are widely promoted European countries? Is this a passport must provide some practical support, meaning and privileges of the Roma, to improve the Roma?

Gypsies and travellers present a problem for your usual common or garden virtue signalling white middle class guilt ridden pseudo liberal. First off, they are an ethnic minority group, so all is well. But, horror of horrors they are also white AND working class!

I do wish that the government would make a stand on illegal trespassers/travellers so that they can be moved on !!

I pay a lot in council tax in Bucks. & when I have taken my dogs into fields over the years & travellers have moved in I am walking through human excrement it is disgusting – why does it take so long to move them on ??