‘No one accepts responsibility’: thirteen refugees dead in Greece

As refugees and migrants die in Greece’s ‘hotspots’, military camps and in transit, the EU, the UNHCR and Greek institutions must be held to account. 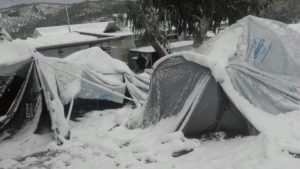 When the European Commission announced, in September 2015, a plan to create hotspots to fingerprint, screen and register refugees arriving in Greece and Italy, many of the larger humanitarian agencies welcomed the development, hopeful that at last some official framework for reception had been agreed. Eighteen months later, and a year after the EU-Turkey deal turned reception into detention, the situation on the Greek islands and in northern Greece remains dire for those refugees who have not been moved out of flimsy tents into prefabricated heated containers or formal housing. In the face of the Arctic blast and unusually strong snowfalls, hotspots have become death traps and refugees are fighting for survival.

These hotspots are not only places of great misery, but they are zones where truth and transparency are in very short supply. The IRR has been trying to ascertain the circumstances in which thirteen refugees and migrants died since April 2016 in Greece, with six of these deaths occurring in hotspots. In only one of these cases are we in a position to provide the full name of the deceased; the only available identifier is nationality. At least six of the dead were refugees from Syria, including Syrian Kurds, three were from Afghanistan. Five of the dead were living at the hotspot at Moria, on the Greek island of Lesbos where over 3,000 refugees are accommodated, well above stated capacity. Those who died here did so because the heaters and gas canisters they had obtained in order to keep warm or cook food were faulty, or used in dangerous situations. 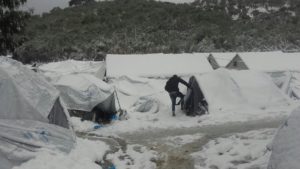 An Iraqi man died of a cardiac arrest at a hotspot in Samos (refugee population around 1,800 in a place designed for less than half that number). Since the Idomeni makeshift migrant camp close to the Macedonian border was cleared by police in May 2016, sub-standard government refugee camps lacking basic amenities have been set up, with three of the dead living in such facilities around Thessaloniki. The oldest to die was a grandmother of 66, the youngest a two-month-old baby. There are three children amongst the dead. The remaining two deaths we have recorded were of men who died of hypothermia after having crossed from Turkey via the river Evros. It’s likely that they made the perilous crossing in order to avoid being detained in the hotspots on the Greek islands. Autopsy results are shrouded in secrecy. Nevertheless, the facts speak for themselves. Overcrowded, unprotected and dangerous conditions are all symptoms of institutional neglect. The simple truth is that the securitisation of asylum policy has come at the expense of refugee protection, as well as basic human rights.

The circle of blame 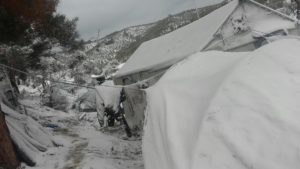 The deaths that have occurred over the winter have at least been reported in the media, partly because human rights defenders, wary of the positive communication strategy of the UNHCR and the EU, issued a number of press releases. Even so, officialdom does not appear over- anxious to investigate. What is particularly worrying is the secrecy shrouding autopsy results, which, if left unchallenged, will ensure that completely avoidable deaths such as these become the new normal. Philippa Kempson, of the Eftalou/ Molovos refugee support group on Lesbos, told IRR News of her fear that the ‘deaths could be subject to cover ups’, and her particular concern that ‘the “accidental” deaths in Moria still do not have a conclusive cause of death’. She also drew attention to the escalation in suicide attempts, particularly amongst unaccompanied minors, at Moria. ‘No one accepts responsibility for what is going on, just a circle of blame,’ she said.

In fact, evading accountability is hard-wired into the way refugee reception is organised in Greece, as there is no central authority responsible for the camps’ administration but a number of actors – a mixture of EU officials, the Greek army and other Greek institutions, the Red Cross and the UNHCR. This means that when anything goes wrong, the various actors end up blaming each other – something academics refer to as a process of distanciation, in which complex chains of responsibility make it difficult to connect cause (ie, government policies) with effect (ie, border-related deaths). Guardian journalist Patrick Kingsley made a similar point in his recent exposé of how a multi-million pound fund administered by the EU’s aid department ECHO, implemented in Greece by UNHCR and aimed at creating adequate facilities to protect refugees from the winter, has been mishandled. Kingsley points out that as ‘no single actor has overall control of all funding and management decisions in the camps, this has allowed most parties to distance themselves from blame’. 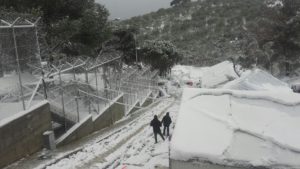 It is human rights organisations, civilian volunteers like the Kempsons, doctors’ associations, legal advocates and the Last Rights project, that are not only keeping these deaths in the public eye, but are stepping in to do the work that the EU, UNHCR and Greek officials should be doing – ie, the work of refugee protection! After the first explosion at Moria on 24 November, that claimed two lives, volunteers from Advocates Abroad provided information sessions in English, Arabic and Farsi, issuing videos on safe use of gas and how to distinguish good and bad canisters and bottles.

Refugees in the camp are also drawing attention to their plight, using whatever means they can – from open letters and public statements, to protest marches and hunger strikes. But as the cases above clearly demonstrate, in the absence of care and protection, which is after all the UNHCR’s mandate under the Refugee Convention, hotspots are places of violence and death – and they can only erupt!

UNHCR was invited to comment but no response was received by the time we went to press.

Read a statement from refugees at Moria refugee camp

This is uncontionable
Someone has to answer for these deaths.
I want a Lawyer to help me charge the respective governments.

Read here another report on the same issue, with additional info about serious incidents and unaccountability at Greek hot-spots, produced by Pro Asyl and Refugee Support Aegean: http://rsaegean.org/greek-hotspots-deaths-not-to-be-forgotten/

“Since March 20th 2016 and the enacting of the EU-Turkey statement (»deal«), hotspots on the Greek islands have become focal points for the implementation of the »deal«. Initially, they were expected to transform overnight to closed facilities – a vain attempt, given a complete lack of infrastructure and safety safeguards that had quickly transformed them into spaces of rampant unaccountability and utter administrative disorder. Very soon hotspots became »open« spaces within which refugees and migrants are forced to remain due to their dependency on provisions from the authorities (food, accommodation etc.) and a problematic access to asylum procedures. The absence of basic safety guarantees is an ongoing issue, with only minor temporary improvements. Since November 2016, a number of people residing or present at hotspots in Lesvos, Chios and Samos have been seriously harmed or even killed in a series of accidents or other tragic events. Refugee Support Aegean (RSA) has researched on whether and in what way the authorities followed up such cases, identified responsibility and imposed penalties if necessary.”