Paris: still on the streets

The abject failure of French President Macron to carry out his promise to get refugees ‘off the streets, out of the woods’ by the end of 2017 is highlighted in the latest report by Refugee Rights Europe (RRE). 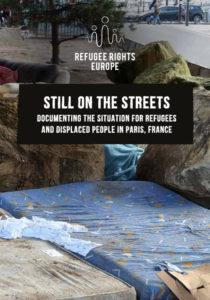 Still on the Streets: Documenting the situation for refugees and displaced people in Paris, France, presents statistical analysis from 283 interviews looking into such things as: how long the respondents have been on the streets in France, whether they have enough food to eat each day and where in Europe they have family.

RRE uses the Universal Declaration on Human Rights as a framework to highlight how states are failing refugees and displaced people. It documents the situation across Europe and has been researching and reporting on the condition of refugees and displaced people since February 2016. Over the last two years it has produced sixteen reports based on interview studies and surveys.

Although it takes a Europe-wide approach, it reports on the individual situation on the ground in each country. It has published reports on the situation for refugees in Calais (both while the ‘Jungle’ camp operated and since its destruction in October 2016), Dunkirk, the hot spots in Italy and Greece (both the islands and the mainland), as well as the situation of asylum seekers in London and Berlin.

RRE conducts research through a methodology of random selection and continuous monitoring of the demographic breakdown to ensure that the final data is representative. The surveys are conducted wherever possible in the respondents’ native language, with research conducting the semi-structured interviews in English, Amharic, Arabic, Pashto, Persian and Tigrinya.

This latest report looks at the conditions and status of those who are currently living on the streets of Paris, following on from the pilot published in January 2017. It highlights that despite President Macron’s promise, there are still many people abandoned on the streets. The statistics produced are invaluable in creating a detailed understanding of the experiences of refugees and displaced people, not only at the current moment, but also over the last two years. Many of the same questions have been asked since 2016 such as; country of origin, experience of police violence and the numbers of minors, which reveals how the make-up of the displaced community has changed and shows the speed with which claims are being processed.

The facts revealed by the reports never cease – from the length of time that people have been in Europe awaiting decisions or trying to move on, to the levels of police violence. Of the 283 respondents in this report, 63.3 per cent have been in Europe for over six months and 18.2 per cent between two and five years. Most shocking though, in terms of the actions of the French state, is that over 100 people are still on the streets despite having claimed asylum in France (35.7 per cent). The statistics powerfully show the systemic nature of police violence and the failure of the French state to uphold even the most basic humanitarian needs, such as food and clothing.

Still on the Streets: Documenting the situation for refugees and displaced people in Paris, France is available to download here.