Prompted by fears that during last summer’s riots, British police forces were preparing to use plastic bullets, activists from Tottenham joined members of parliament and a delegation from the North of Ireland at a recent Westminster press conference to denounce their deployment.

Last month, the Metropolitan police confirmed that since the August 2011 riots its stockpile of plastic bullets, also known as baton rounds, had increased to over 10,000. Through a Freedom of Information (FOI) request made by former Liberal Democrat member of the London Assembly, Dee Doocey, the Met revealed that between 2010 and 2011 the use of plastic bullets was authorised in the capital on twenty-two occasions.

The use of plastic bullets is very much a UK method of crowd control. Pioneered as a ‘safer’ alternative to rubber bullets, they were first used in the North of Ireland in the mid-1970s. In that decade alone, over 40,000 plastic bullets were fired. This ‘safer’ method claimed its first victim in 1975 in 10-year-old Stephen Geddis. Since then, thirteen other people have died. Hundreds have suffered upper body injuries, been blinded or suffered brain damage, more often than not in riot situations, and children in particular have been affected. Plastic bullets were not designed for crowd control, are only to be used when absolutely necessary and should only be fired at the lower body. Although Sir Hugh Orde, former chief constable of the Police Service of Northern Ireland called for an end to their use in 2007, plastic bullet deployment has increased in the past couple of years, with over 350 rounds fired between June and July 2011 alone. 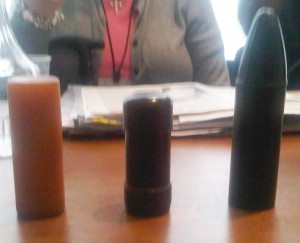 With the rise in plastic bullet use in the North of Ireland and ominous stockpiling across other parts of the UK (and in the week the inquest opened into the death of Sean Rigg in police custody and the trial of PC Simon Harwood for the death of Ian Tomlinson) the press conference was held in parliament on 21 June. ‘Use of Plastic Bullets will Fuel Racial Tensions’ was chaired by Labour MPs Jeremy Corbyn and John McDonnell. Speakers included veteran campaigner on the issue, Clara Reilly, chair of the United Campaign Against Plastic Bullets (UCAPB), Paddy Kelly from the Children’s Law Centre in Belfast and Stafford Scott, from the Tottenham Defence Campaign (TDC), a supporter of the Mark Duggan family.  The press conference was the final event following a  two-day symposium  comparing black, Muslim, Irish and Gypsy and Traveller community perspectives on public order policing organised by the Institute of Race Relations, the Power and Conflict and Justice Research Group at Edge Hill University and the Tottenham Defence Campaign at the Bernie Grant Arts Centre on 19 and 20 June.)

The UCAPB, has been campaigning for almost thirty years against the use of plastic bullets in the North of Ireland and calls for an outright ban on the use of these ‘lethal and excessively dangerous weapons’. Clara Reilly, of the campaign, told the press conference how they were ‘dismayed’ last year at news that plastic bullets could be deployed if there were further disturbances in England. ‘It is obvious there is much work to be done in local communities around racial tension and abuse, police accountability, poor housing, unemployment and how the promotion of human rights must become a policing priority.’ (Read Clara’s speech here) She also expressed concern that the further escalation of the use of plastic bullets in the North of Ireland could put an end to the peace process.

Paddy Kelly of the Children’s Law Centre in Belfast predicted that, on past experience, at least one child will be murdered this summer by a plastic bullet. In 2010, a 17-year-old suffered serious injuries. She described such incidents as a serious breach of children’s rights which had only served to escalate tensions in the North of Ireland. She also expressed her worry that, with the stockpiling of plastic bullets in the aftermath of the riots in England, the upcoming Olympics and rising racial tensions, plastic bullets could be used against black and Muslim youth this summer in England. She urged people in London to be vigilant ‘as the consequences are severe to bear’.

Stafford Scott (who has at close hand experienced the 1985 and 2011 Tottenham disturbances and their aftermath) commented on the Irish experience: ‘Hearing these stories I’m really concerned that the British government […] are actually keen to ensure that the police have these plastic bullets at their disposal. It appears that the government understands that its policies are going to fuel more unrest on our street. And rather than looking at the impact of its policies … being tough on the causes of crime and the causes of these confrontations, they are actually saying they are going to quell them using materials that look like this … These things are not going to stop people coming out and protesting and demonstrating and our experience, my experience, shows that what they are going to do is escalate the troubles and problems that we have in urban areas. So I implore the British government to think again.’

John McDonnell MP agreed with Stafford Scott’s analysis that there was a considerable political dynamic to policing. Jeremy Corbyn MP said that under the current government there had been a move from policing by consent to policing by enforcement. The security paranoia developing in the UK made it easier for the police to access and justify large stores of such weapons. The two MPs said that they would take action by submitting an early day motion, asking questions in parliament and seeking a ministerial meeting to ask what the government’s intentions are and then to ask them to consult with communities about the implications of the introduction of plastic bullets. The solution, said McDonnell,  does not lie in arming the police or heavy-handed and dangerous policing but in dealing with the underlying causes of the increasing social unrest, embodied in the wide-sweeping cuts to public services, growing (youth and) general unemployment and the closure of facilities that foster social cohesion. Stockpiling these weapons creates hysteria and an impetus for their use.

Recently, measures have been introduced further restricting the right to protest around parliament and severe sentences have been given to people taking part in student protests. Coupled with the austerity and privatisation agenda, the CEO of private security firm G4S also predicted this week that in five years’ time, large parts of the police service, a crucial public service, would be run by private firms. The prospect of unaccountable private ‘policemen’ running around with plastic bullets is frightening.

In the North of Ireland, accountability has also been an issue with public authorities. Families and individuals who have suffered injury or fatalities have attempted to seek legal redress. Many court cases have been brought and while large amounts of compensation have been paid, an admission of wrongdoing in itself, only one policeman has ever been charged, in 1984 for the murder of John Downes.  He was, however, acquitted. The police, army and government have not been held accountable in any way.

Despite the prevalent use of plastic bullets in the North of Ireland over the past few decades, there has been little reporting about this issue in the mainstream British media. Clara Reilly said, ‘the public has no idea of what plastic bullets are and what they can do, or they would otherwise be opposed to their use’.

Read an IRR News story: ‘Plastic bullets cannot further “the cause of peace”‘