Colin Prescod, chair of IRR, writes on the launch of the Equalities and Human Rights Commission (EHRC) report into Grenfell and the continuing wait for justice.

Twenty-one months on from the disaster that was visited on their community, Grenfell people still wait for justice. On 13 March 2019 the Equality and Human Rights Commission (EHRC) released a report on Grenfell.[i] The findings and recommendations are being submitted to the Government’s Grenfell Public Inquiry in regard to the 14 June 2017, west London, Grenfell residential tower fire in which seventy-two people perished.

Earlier last month, the Metropolitan Police admitted that no prosecutions would be likely until the public inquiry has reported its findings and recommendations – although at its inception in 2017, it was indicated that it was already possible to see grounds for prosecutions to be brought.

Given the slow progress of the Public Inquiry, and the fact that human rights and equalities concerns belong properly to its Phase 2 hearings – the EHRC’s submission is timely. 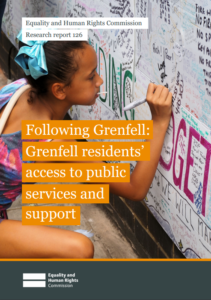 The EHRC reported on its investigations in regard to Grenfell residents’ access to services and support in the period before and after the 2017 fire. And, in a bold and politically sensitive move, it chose to hold the public launch of its findings and recommendations at the Muslim Cultural Heritage Centre in west London – in the neighbourhood of the tower.

Highlighting an urgent need for ‘duty of accountability’ public sector training, the EHRC reported that overall it had found a degree of ‘institutional inadequacy’ in regard to communicating and sympathising with those most affected by the Grenfell disaster. The investigation found, for example, that the local Roma gypsy community, mostly overlooked in media coverage about the Grenfell neighbourhood, could obtain no assistance with clearance of the litter of burnt debris covering its site, in the wake of the fire. Just so, the EHRC notes, as many others have done, that the Public Inquiry itself has been convened geographically too far away from the Grenfell locality!

Sifting through the evidence gathered by Race on the Agenda (ROTA)[ii] along with that emanating from the Public Inquiry hearings, the EHRC investigated matters specifically related to both ‘the right to life’ and ‘equality rights’. It found evidence of serious breaches to the right to life – for which see the coroner’s report to the Public Inquiry in relation to improper use of cladding, lack of proper evacuation procedures, poor high-rise fire-fighting training, poor advice to residents – all of which demonstrate past, and continuing, breaches of the right to life. What’s more, the EHRC has concerns as to whether the duty to investigate potential risks to the right to life has been complied with. And, in terms of equality rights, the EHRC found violations of the public sector duty in regard to the rights of the vulnerable, women, the disabled, and children – where ‘minority ethnic’ groups made up the majority of the residents in the Grenfell tower.

Looking to the continuing process of the Public Inquiry, the EHRC representatives stressed a concern that right to life and equalities matters would in all likelihood not be picked up in the Phase 2 hearings. And, in conclusion, they stressed the need for urgent attention in regard to changes to buildings legislation, adequacy of information to residents, lack of regulatory systems, remedial works, fire-fighting training, systemic failure – affecting a large number of now existing sites around the UK. 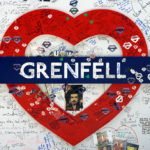 In the Q&A with which the event ended, local activists appeared to be under-impressed. The tone of their questions – so what now? where is the focus on power-inequality in these human rights concerns? can ‘independent’ organisations like the EHRC please give some explicit guidance and specific action support? – hardly disguised the fact that they would like to see considerably more militancy added to the need for urgency that is acknowledged in the the EHRC’s report.

The platform speakers came up with judicious responses – (a) keep up the campaigning, (b) try to effect change in public sector practices by using the electoral system, (c) take legal advice and action.

[i] To date the EHRC has produced five briefings laying out the key equality and human rights issues relating to the Grenfell Tower fire, available at www.equalityhumanrights.com/en/following-grenfell. [ii] ROTA was commissioned to gather evidence on the lived experience of those directly affected by the Grenfell fire. And, in passing, the convenors mentioned that even at one remove, so to speak, the testimonies collected were so disturbing that ROTA researchers required trauma-therapy.

I’m Black and I have had enough of being persecuted by white people, and sell-out blacks in Britain. It’s time for me to leave, racist Brixton and racist Britain with its bent coppers and bent judges giving and taking perjured evidence for illegal death warrants against Windrush, “West-indians” of Jamaican heritage. What’s more, I’m England, born and bred!

Colour is not an impediment culture is. Social integration means accepting the local culture not drowning it abusing it or taking advantage of it.

There have always been haves and have nots before the mass movement of people into the UK post WWII. Not much is heard of the discrimination of those who could not return to Eastern Europe after Communism took root or who remained in the UK after being prisoners of war, here or in the axis countries. They also made a choice to stay in the UK, or return to bombed out countries where their families had been exterminated or incarcerated and start again. They had to sign the Aliens Register each time they changed their address and
monthly/yearly. There was little assistance – a job, a suit and 2 shirts and a hostel room. So a baron worked in a mine and a doctor on the railways. Not vociferous in their complaints.

You say Black, but what is that? Being light skinned, pink or orange does not help you on the housing ladder or in school or in work when your name with an icz or ski or ini is the first off the list. Many changed their names, but racial features still identify them – flat heads, olive skin, bright blue eyes, stature. These are not the new EU migrants, but after 80 years of Prejudice the and their British descendants are classed as new wave migrants.

Whilst Black, LGBTQI+, Muslim and Jew are protected by anti-racist press, Lancashire or Irish Catholic women are not. They are mainly non-black heterosexual who may just have children, if they can afford them, in the country where their great grandfathers went down the mines or into the mills and factories at 7years old, lived in tied cottages, and when they died, their families went into workhouses until they died. These women do not get accepted into the universities and professions because they may leave when they have children. These women do not have children outside marriage, so these single women are not entitled to council accommodation.

Anybody born and raised in the UK cannot just move to London and expect to be rehoused, even though they may fall into a protected section of the population. The discrimination they see is the housing lists closed to them, as their move is classified as enforced homelessness. The quality of life on the northern housing estates is worse than in London, as there are no jobs, and they cannot move. In London there is opportunity, as so many foreigners have found in work and education. Travelling 10miles outside the South East can take 2 hours or more with public transport stopping at 6pm and weekends. In London it is a Tube ride. Students can live at home and go to college as London is infested with Unis and FE colleges.

During their great grandfather’s life, anyone from the next town would be treated with circumspect. They would be seen as taking the vacant cottage or bedsit, they would be the extra man at the factory gate waiting to be picked for work, or the extra family at the soup kitchen or a danger to their daughters.

Each nation fears the foreigner. Unfortunately, the majority of white British have nowhere to go back to. They don’t have dual nationality. They appear to have no right to complain or be resentful of accusations of discrimination constantly directed at them by people benefitting from a country and culture that they came to enjoy and which they or their descendants now wish to destroy.

Whilst the microscope is out on Grenfell, invert it and turn it into a telescope on everyone. You will see the colours meld together. We all suffer from discrimination.

When the report comes out on Grenfell and the rogue landlords’ names and faces are published, towards whom will the claims of institutional racism be directed?