Rats in the kitchen, sodden carpets in the living room

When researcher John Grayson visited a family with disabilities living in a Mears asylum house in Rotherham, he was stunned by what he saw.

‘That’s where the rats get in.’ April [all names have been changed] was showing me round the kitchen in her Rotherham asylum house. I was visiting her with a volunteer interpreter to investigate reports that the family was in real difficulties. The visit confronted me with the worst case of neglect by an asylum housing provider I have encountered in my research and campaigning on asylum housing over the past seven years.

April and her husband Alan, who are of short stature, have a 6-month-old baby Rose who has a hole in her heart, and two other disabled daughters: tiny 7-year-old Sue, and 3-year-old Kelly, both of them have short stature and multiple health issues, including kidney problems. The family is from the Middle East seeking asylum and safety in the UK.

Since May 2019 the family has been forced to live in a house, totally unsuitable, in fact hostile to their disabilities and miscellaneous health needs. It floods regularly, water comes through the door and windows, mould grows on the wall and there are rats in the kitchen.

April told me (via the interpreter), ‘they brought me, my new baby and disabled daughters from the Birmingham hostel to here. When I was in hospital after the birth someone came and asked me where I would like to live. I said my baby was born in Birmingham so I would stay in Birmingham. The person said that they would find me a flat for my kind of family. Then they came to the hostel and brought me, my new baby and my two disabled daughters to this house. When I saw the house, I told them I did not want to live there. They said if I did not go into the house then I would be put on the streets.’

She continued: ‘They sent me to the hostel in Wakefield when I was nearly due to have my baby and then moved me to the Birmingham hostel. Just before I was having my baby, they wanted to move me back to Wakefield, I said no.’ 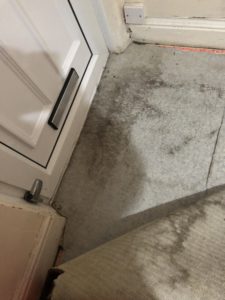 Damp and mould on carpet

With Kelly and Sue playing around us, April showed me over the house. In the living room, April pointed to damp and mould near the windows. ‘When it rains water comes through the window frame and under the door and the carpet gets very wet and my children cannot go on it’. April shows me the stains and water marks on the drying carpet.

Three-year-old Kelly says, in perfect, English, ‘I am tired.’ April states proudly, ‘Kelly goes to nursery and learns English now.’ Then through the sparsely furnished dining room, she points to a new washing machine and a fridge, still standing in their packing cases. ‘They came yesterday, we have not been able to wash clothes for weeks.’

‘That’s where the rats come in’ 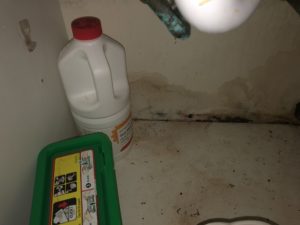 Cupboard where rats come in

In the kitchen, April opens a cupboard under the sink. ‘That is where the rats come in.’ I ask April when she last saw a rat. ‘Last night it was a big one it came out of there.’ I had seen on the Visitation Log on the house notice board, that housing staff had visited on 23 and 26 November for ‘pest control’. It was now 7 December, and there was no evidence of closed poison boxes for the rats, or any other ‘control’ measures. 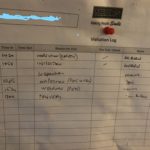 Outside the back door there was an abandoned toilet block, possibly one source of the rat infestation. There was a squalid backyard with rotting wooden decking leading to a large overgrown patch of weeds. This was the only outside play space for two young disabled girls with multiple medical conditions. 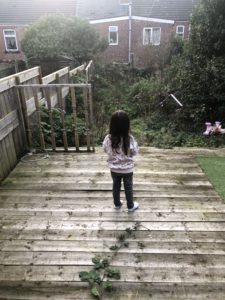 Living with disabilities in a Mears asylum house

April takes us all upstairs. ‘Alan and my son are in Croydon today. When they are here, there are six of us in these two rooms. There is only one small wardrobe for all of us.’ On the ceiling of the corridor are water marks from dripping water. In the bathroom April points to the toilet. ‘When we use the toilet, water leaks from the pipes into downstairs.’ 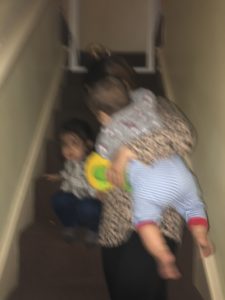 April tells me, ‘I am very small, and I cannot carry my baby and watch my daughters up the stairs. Kelly has one leg shorter than the other with a twisted ankle and she fell down the stairs and broke her leg.’

April shows me reports from Sue and Kelly’s consultants at the Sheffield Children’s Hospital. The children have multiple medical needs and are undergoing tests and scans. The Children’s Hospital is eleven miles from April’s house. ‘I have no help with the travel expenses’, she tells me. ‘Alan and my son have never had any money. All of us have no ID cards.’

The ID or ARC (Application Registration Card), introduced in 2017, is given to every asylum seeker to acknowledge their asylum claim, and is at the centre of the everyday lives of asylum seekers. According to the Home Office, it ‘displays an individual’s claimed identity to third party organisations, where it is used for internal and external status checking to establish entitlement to services and the right to work.’ The ARC is also used by external bodies including the police and the NHS to verify identity details held by the Home Office.

I have never heard of a whole family denied ID cards for this long by the Home Office. April and her two daughters came to the UK in March 2019, baby Rose was born in Birmingham and Alan and their son Michael came later. 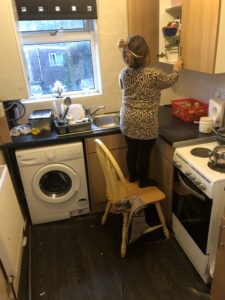 I ask April how she manages in the house. ‘The house is on hills and I cannot push the buggy with my baby and my disabled daughters. The only way I can reach the food cupboards in the kitchen is by standing on the chair. I have fallen off the chair twice. I cannot reach the sink or the cooker. Cooking is very dangerous for me.’

The Home Office, the Mears Group and outsourcing

For seven months, April has been forced to live in this unsuitable, hostile asylum house. No one has intervened to provide accommodation suitable for the family. The Visitation Log on the house notice board shows that Mears staff visited on 27 August, then not again till 1 October and then again on 12 November. Mears claim that their staff visit all their properties every fortnight. No one seems to have contacted the Home Office (which is ultimately responsible for placing the family in the house on a ‘no choice’ basis).

When April and her family were forced to take the house in May, G4S, the largest security company in the world, held the Home Office contract to provide asylum housing in Rotherham. In September, the Mears Group, an outsourcing company working in two sectors (housing management and home care)  became the  UK’s biggest refugee landlord, beginning three 10-year asylum accommodation contracts from the Home Office worth a total £1.15 billion. Mears is one of the UK’s biggest maintenance and repairs contractors, working on over 650,000 homes for councils and housing associations. Mears home care division provides care to 15,000 older and disabled people. The company employs 12,000 people. Mears is now responsible for asylum housing in Rotherham

In April’s house nothing changed when Mears took over. In fact, things got worse. South Yorkshire experienced the wettest November for many years and the damp walls, water leaks and sodden carpets in April’s house just got worse. April’s daughters with their weak immune systems and her baby with a hole in the heart had constant colds and infections.

In the weeks leading up to the September takeover Mears Group staff spoke to voluntary sector ‘partners’ in South Yorkshire and stressed that they had experience as a company of the care sector, and would put care for their tenants, particularly vulnerable ones, in asylum housing at the top of their priorities. They said they would appoint specialist welfare officers to work with these tenants.

In the Mears ‘Service User Handbook’ for asylum housing tenants the following appears:

If you require any specialist care, you may be provided with a support plan. Your support plan will be reviewed regularly, and other people may attend reviews if appropriate, such as a social worker

In the Statement of Requirements for the Mears Group’s £1.15 billion ‘Asylum Accommodation and Support Contract’ with the Home Office, the following appears:

Accommodation for disabled persons must be fit for purpose and used for its intended purpose in compliance with relevant legislation, including the Human Rights Act 1998 and the Equality Act 2010. The Provider shall ensure that the Accommodation and its associated facilities are accessible by the Service User, and, where necessary, it has appropriate adaptations to enable the Service User to live independently, or in accordance with a Local Authority assessment under the Care Act 2014.

Over the past three months the record of the Mears Group in Yorkshire has been disappointing to tenants. In early November the Independent reported on the ‘failing’ Home Office contracts with ‘asylum seekers left with no heating in rat infested homes’.

The new contracts for asylum housing separated the reporting of repair needs from the main housing contractors. This irrational step has meant that the only number available to call about repairs in a national one — the central number for Migrant Help, a charity which has held Home Office contracts for asylum support and advice since 2014. In 2019 Migrant Help won the £100 million contract to run the Home Office system called Advice, Issue Reporting and Eligibility (AIRE) services, which includes the reporting of repairs. Since September, there have been continual massive delays in asylum tenants being able to report repairs to Migrant Help, to be passed on to Mears. Migrant Help puts the delays down to ‘teething problems’ and ‘high demand’.

In Sheffield, in a Mears ‘mother and toddler’ house which I have visited regularly, there have been four periods over the past two months when there has been no heating and no hot water. Residents told me that they spent literally days ringing the repair number to try and get the boiler fixed. At one stage mothers and their toddlers moved out to friends to keep their children warm. Ruth, a single parent with a 3-year-old, told me ‘I had nowhere else to go. It was very cold for us, I had to boil water to wash and bathe my son.’

The Mears contract is already failing asylum tenants in Yorkshire, like April and her family. Campaigners will get the family moved into more suitable accommodation. Hopefully Mears will monitor the housing conditions for their vulnerable asylum tenants with disabilities much more systematically in future.

I contacted the Mears Group press office on 10 December for their comments on the case of April’s family.

John,
You continue to do excellent work in support of the most vulnerable members of society. Best wishes to you for Christmas and 2020.
Barrie Dalby
(Northern College Diploma student 2005-06)