The death of George Floyd in Minneapolis on 25 May, after a policeman knelt on his neck for nearly nine minutes as he pleaded he could not breathe, sparks protests across the UK and Europe. This roundup details those protests and related developments.

Graffiti on a train in Belgium, in memory of George Floyd. Credit: Facebook/1 Up Crew

30-31 May: Over the weekend of 30-31 May, demonstrations take place in Berlin, Copenhagen, Milan, Dublin, Krakow, and Paris, where the family of Adama Traoré – a 24-year-old black man who died in police custody in 2016 declaring ‘I can’t breathe’ – participate. The image of a Belgian train carrying the message ‘Please, I can’t breathe’ goes viral. (CNN, 1 June, Brussels Times, 31 May 2020)

30-31 May: Activists drape a banner over scaffolding at the Brussels Palais de Justice overnight, calling for justice against police violence. The banner calls for ‘Justice for Adil, Mehdi, Semirah, Mawda [all killed by police]. Their violence is not confined. Neither is our anger’. Black Lives Matter call a demonstration for George Floyd in Brussels for 1 June, but cancel it after being refused permission because of Covid-19. (Brussels Times, 31 May 2020 (2 stories)

31 May: The day after a protest in Peckham, south London, thousands of protesters block the road outside the US Embassy in Battersea, chanting ‘I can’t breathe’, and many more gather in Trafalgar Square chanting ‘Black Lives Matter’. Demonstrators also gather at Grenfell Tower and Downing Street, and hundreds march in Manchester, Cardiff and Nottingham. A banner in Manchester reads ‘This is a world-wide issue’, while one in Cardiff reads ‘Black Lives Matter #FreeSiyanda’. (Independent, Mirror, 31 May, Guardian, 1 June 2020) 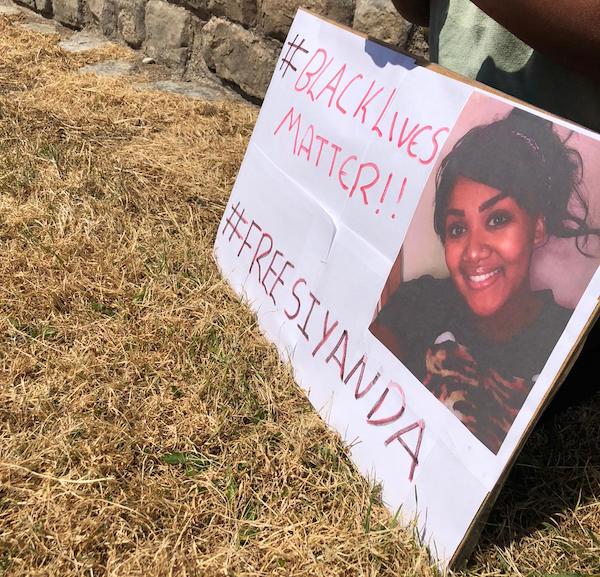 Banner at a demonstration in Cardiff. Credit: The Monitoring Group

1 June: Protesters gather at the American consulate in Barcelona and outside the US Embassy in Dublin, and around 10,000 people chanting ‘I can’t breathe’ demonstrate in central Amsterdam in solidarity with George Floyd. (Público, Reuters, 1 June, iNews, 3 June 2020)

1 June: Organisers of anti-racism protests in the UK call for further demonstrations this week, in solidarity with those taking place across the US protesting the killing of George Floyd and against the unfair targeting of BME people by police during the lockdown. (Guardian, 1 June 2020)

2 June: At least 15,000 march in Paris, despite a police ban, and demonstrations are held in other French cities, in protests linking the death of George Floyd with that of Adama Traoré, a construction worker who died when French police jumped on his back and suffocated him in 2016. (Washington Post, 2 June 2020)

2 June: Hundreds of protesters gather outside St George’s Hall, Liverpool, as Stand Up To Racism calls on everyone to take the knee on their doorsteps at 6pm on Wednesday 3 June. (ITN, Stand Up To Racism, 3 June 2020)

3 June: John Boyega joins thousands attending a Black Lives Matter protest, marching from London’s Hyde Park to Parliament Square, and addresses the crowd, saying ‘We are a physical representation of our support for George Floyd…for Sandra Bland…for Trayvon Martin… for Stephen Lawrence.’  Protesters take the knee outside Southall Town Hall, and further protests are planned for 4 June in Birmingham, 6 June in Manchester’s Piccadilly and in London’s Parliament Square, and 7 June near the US Embassy in London. (Evening Standard, iNews, Metro, Twitter, 3 June 2020) 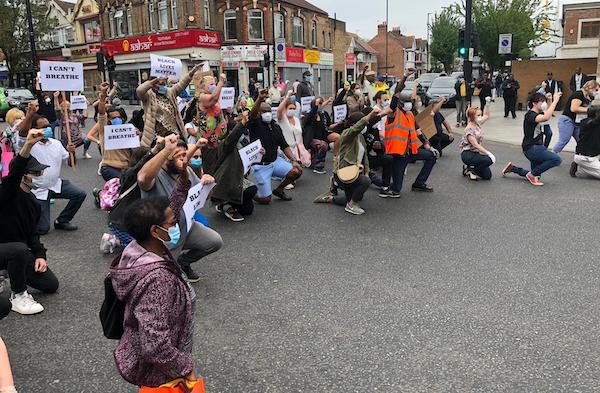 A BLM protest in Southall. Credit: The Monitoring Group

29 May: The European Commission expresses condolences to George Floyd’s family and calls on the US authorities to take ‘serious action to prevent such tragedies and to ensure justice is done when they do occur.’ (Brussels Times, 29 May 2020)

31 May: In a series of tweets, Donald Trump says he will designate ANTIFA a terrorist organisation, and that left-wing activists are responsible for violent protests in Minneapolis and other cities. (Independent, 1 June 2020)

31 May: Foreign secretary Dominic Raab is accused of being ‘weak and wrong’ by shadow Lisa Nandy and Lib Dem foreign affairs spokesman for his failure to condemn Donald Trump’s response to protests over the death of George Floyd, in particular his tweet ‘looting leads to shooting’. (Independent, 31 May 2020) 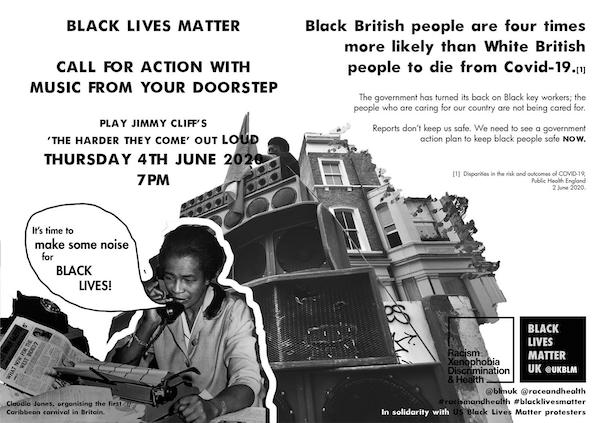 2 June: The archbishop of York, John Sentamu, says he would join peaceful protests if he was not self-isolating, while senior religious figures including the bishop of Liverpool Paul Bayes and bishop of London Sarah Mullaly make statements calling for dignity, equality and justice, and archbishop of Canterbury Justin Welby invites white Christians to ‘repent of our prejudices’. (Guardian, 2 June 2020)

3 June: After Labour leader Keir Starmer expresses his ‘shock and anger’ at the death of George Floyd and his surprise at the prime minister’s silence over the issue, Boris Johnson says the events were ‘appalling’ and ‘inexcusable’, and he ‘perfectly understand[s] people’s right to protest what took place’. (Evening Standard, 3 June 2020)

3 June: Labour and the SNP call on the government to halt exports of riot control equipment including tear gas and riot shields to the US, saying any use for internal repression would contravene the law. (BBC News, 3 June 2020)

2 June: Twitter suspends a fake antifa account run by the white nationalist group Identity Evropa for making posts inciting violence during the ongoing protests in the UK. The recently created account, @ANTIFA_US, issued tweets calling for violence and rioting and ended with the post #BlackLivesMatter and #F***America, with the profile’s photo included the antifa logo. (Deutsche Welle, 2 June 2020)

1 June:  Liverpool FC retweets a picture of 29 of its players at a training session taking the knee at Anfield Stadium, which squad members post on their social media accounts with the caption ‘Unity is strength #BlackLivesMatter’, as Premier League footballers including Manchester United’s Paul Pogba and Marcus Rashford share anti-racist messages on social media (Al Jazeera, Guardian, 1 June 2020)

1 June: Amid news that the German Bundesliga will investigate gestures of solidarity by four players, the chairman of anti-racist sporting charity Kick it Out, Sanjay Bhandari says the league should show leniency and suggests all players take a knee to express support for Black Lives Matter (Guardian, 1 June 2020)

2 June: After Chelsea and Newcastle United teams take the knee during training in solidarity with Black Lives Matter, and Fifa praises the four players leading protests in Germany’s Bundesliga and urges national associations to show understanding, the Football Association says it will adopt ‘a commonsense approach and an understanding of [the] context’ to any gestures or behaviour which may constitute breaches of the laws of the game. (Guardian, 2 June 2020)

2 June: Lewis Hamilton makes a strong plea for people to stand up against racism and injustice, saying on Instagram that we ‘should not have to feel as though we were born guilty, don’t belong, or fear for our lives based on the colour of our skin’. (Motor Sport Week, 2 June 2020) 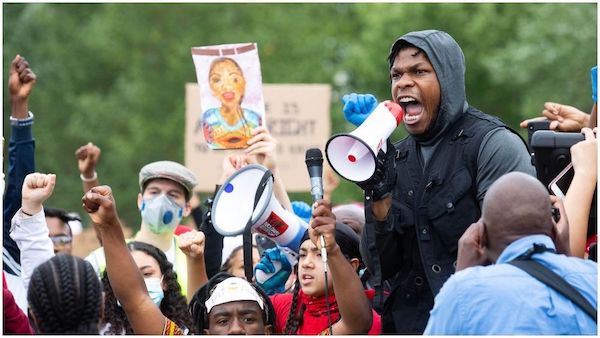 28 May: British actor John Boyega posts ‘I really f***ing hate racists’ on Twitter in response to the death of George Floyd. Boyega later responds to criticism and racist messages on Instagram Live by saying ‘first of all, you’re going to respect black people online.’ (Sky News, 28 May 2020)

31 May: The Galician newspaper La Voz de Galicia is accused of racism following a tweet in relation to the death of George Floyd, which read ‘African Americans are only 12% of the population but they commit more than half of the murders and robberies, and 70% of drug-related crimes. Does this mean that their interactions with the police, sometimes lethal, are more common?’ (Público, 31 May 2020)

2 June: Instagram’s #BlackoutTuesday, in which users post black squares and stop online activity in response to the killing of Floyd, attracts controversy.  TV channels and radio stations in the UK and elsewhere change programmes to mark ‘Blackout Tuesday’, hosting discussions on racism and ‘moments of reflection’. (Guardian, 2, 3 June 2020)

It is amazing and uplifting to read about the solidarity demonstrations in the UK and elsewhere in Europe. Here in Boston MA tens of thousands come out each day. with fired up young people doing a phenomenal job of mobilizing across race/class lines.