Right definition for the right fight

If we don’t name Islamophobia as a form of racism, how can we combat it?

Islamophobia may not be an all-embracing term – literally it means a fear of a religion – which is why some of us have, over the last two decades, preferred the term anti-Muslim racism to describe what has been happening in the UK. However, given that the term Islamophobia has gained common currency, it is absolutely right and necessary that it be (re)defined in the social context in which it is now used. And the definition that the All-Party Parliamentary Group (APPG) on British Muslims has come up with – drawing on the pioneering work of the Runnymede Trust – should not present a problem: ‘Islamophobia is rooted in racism and is a type of racism that targets expressions of Muslimness or perceived Muslimness’.

It is, in simple terms, describing the racist, poor and/or differential treatment of people on the basis of what other people or institutions take to be the fact they are Muslim. 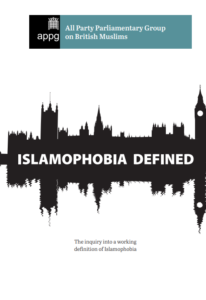 Yet the government has this month decided that the definition, originally published in December 2018, is – unlike the IHRA anti-Semitism definition, which it argues was already adopted elsewhere – too controversial and cannot be adopted (though it has been by the Labour Party, Liberal Democrats, the Scottish National Party and Scottish Conservatives). Communities secretary James Brokenshire told the House of Commons that the APPG’s definition needed ‘more consideration’.  He added: ‘It is clear that with such a complex issue we need to interrogate this further as a matter of urgency. That’s why we will be appointing two advisers and ensuring this reflects the need for community representation … our priority is to arrive swiftly at a collective position.’ [1]

The objection to the definition appears to be coming from attackers on four sides: the free speech advocates; the security services; those who have systematically attacked any extension of the concept of racism beyond personal bigotry; those who object to the ‘racialisation’ of a religious group. And all appear not to have read the APPG’s careful report, based on community consultation, written evidence and literature reviews, which answers all these issues. [2]

The whole point of the definition which uses the term ‘Muslimness’ is clearly there to show it is not the religion of Islam which is being discussed but the social treatment of people who appear to be Muslim. So the argument that it would curtail free speech and the possibility of genuinely debating a religion such as Islam just does not hold water. Neither does the argument that this cross-classifies a religious group as an ethnic or racial one. For that debate had already been had years ago, with the establishment in the courts (in the 1980s) of Sikhs as an ethnic group for the purposes of the Race Relations Act. [3] And moreover, the whole concept of anti-Semitism (as opposed to a term like Judeophobia) it would seem, is based on the premise of just such a religio-ethnic category. 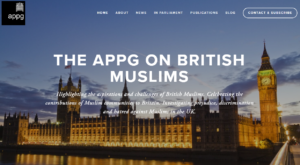 Then we have had the somewhat self-incriminating protest from the National Police Chiefs Council. Its chair, Martin Hewitt was concerned amongst other things that ‘it could also undermine counter-terrorism powers, which seek to tackle extremism or prevent terrorism.’ But, as the secretary general of the Muslim Council of Britain pointed out, ‘Our understanding is that the police and security forces will rightly fight terrorism based on intelligence and a scrutiny of the evidence. Anti-terrorist operations can only be “hampered” if counter-terror officers have been targeting Muslims because of their identity (or Muslimness as the definition states), categorising them as security concerns. If this is the case, it confirms long-voiced concerns about the disproportionate focus and impact of counter-terror operations on Muslim communities.’ [4]  In other words, the police appeared to be justifying a need to hold on to their right to discriminate, ie, to profile Muslimness. 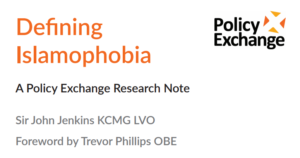 And then are those who just won’t accept racism as anything beyond pure bigoted attitude. It is the same kind of argument that was used against the Macpherson report and the notion of institutional racism by the remnants of the New Right. Somehow, speaking the reality of racism makes racism worse. And those that do speak its name have a sinister agenda. [5] And this argument (alongside many of the above) can be found in the very strong reaction to the Islamophobia definition in the works of Policy Exchange, which produced two report notes, Defining Islamophobia: a research note (December 2018) and On Islamophobia: the problem of definition (May 2019). ‘Anti-Muslim hatred and bigotry is a problem that needs to be addressed…. But the proposed definition of Islamophobia is not only inadequate but divisive and potentially damaging to social cohesion.’ This first report writes that accepting the definition ‘will isolate [British Muslims] and make them the object of continuing hostility’. ‘It misreads the attitudes of most Britons. And it reduces the lives of British Muslims.’ (Like the critics of Macpherson, it takes the idea of societal racism as a comment on all Britons.) And it will serve sectarians, ‘especially the Far Right and Islamists’. The second report goes further in attacking those who see Islamophobia as an aspect of social racism: ‘It is a word that has been weaponised by some of the most controversial groups within British Muslim communities’, writes Khalid Mahmood MP. ‘It will serve as a stalking horse for a new form of communalist, gatekeeper politics.’ He turns the issue on its head by stating that one of the main causes of Islamophobia comes from the groups that have ‘insufficiently’ challenged extremism – in other words blaming the victims. For the Policy Exchange authors, which include Trevor Phillips, formerly chair of Runnymede and the Equality and Human Rights Commission, there clearly is ‘a problem with anti-Muslim hatred and prejudice within the UK’ but here Muslims ‘now enjoy legal protections superior to those in many other jurisdictions’.

To carry on a fight over a definition does not change by one iota the reality of treatment meted out to Muslim people day in, day out; it merely calls into question the bona fides of the quibblers, and the government which chooses to heed them.  For as Juliet said of the rose, ‘What’s in a name?’ It would, by any other name, still smell as sweet. In this case not naming today’s Islamophobia as what it is – an aspect of racism – could convey more than a whiff of Islamophobia itself.

[1] ‘Government rejects proposed Islamophobia definition but will give issue “consideration”’, says James Brokenshire, Independent, 16 May, 2019. [2] MP Wes Streeting, who co-headed the parliamentary group, points this out in ‘Yes, Islamophobia is a type of racism. Here’s why.’ Guardian, 15 May 2019. https://www.theguardian.com/commentisfree/2019/may/15/islamophobia-racism-definition-free-speech-theresa-may. See also Nesrine Malik, ‘It’s not difficult to define Islamophobia’, Guardian 19 May 2019, https://www.theguardian.com/commentisfree/2019/may/19/define-islamophobia-britain-struggle-tory-party-police-prejudice [3] In the case of Mandla v Dowell-Lee brought in 1982 over the refusal of a school to allow a student to wear his turban, it was ultimately decided in the Lords, overturning an appeal court ruling, that Sikhs are an ethnic group as then defined by the 1976 Race Relations Act. [4] See Vikram Dodd, ‘Police chiefs in row over definition of Islamophobia’, Guardian, 15 May 2019 https://www.theguardian.com/news/2019/may/15/police-chiefs-in-row-over-definition-of-islamophobia [5] The Institute for the Study of Civil Society was particularly keen post-Macpherson to demolish the idea of institutional racism and especially the notion that the police could be accused of this. See for example, Institutional racism and the Police: fact or fiction, London, Civitas, 2000 and Racist Murder and Pressure Group Politics, London, Civitas, 2000.

I begin with an apology for ignorance about this debate. But it does strike me that surely we should start with some definitions of race and religion, and see how they differ. I know race is a slippery concept, but I take it that if I, a white Brit atheist, should be converted to Islam I’d be vulnerable to Islamophobia but not racism.
And I take it that if I read the Koran and thought that some of the injunctions were threatening to me as a non-Muslim (but was ready to be corrected by those who know the book better), I would not, for that reason, be Islamophobic. May I say that I lived very happily, and with much gratitude, in a Muslim community in Northern Nigeria for some eighteen years.

John, according to the APPG definition, were you to convert to Islam as a white Brit, you surely would be vulnerable to Islamophobia (as racism), but only to the extent that your appearance, customs and habits were read as Muslim. That would hold even if you didn’t convert, but decided to grow a beard, wear Islamic clothing, etc. As a white person you’d likely avoid the worst of it though, simply because “perceived Muslimness” tends to signify South Asians, Arabics, and East Africans.