The workplace struggles of precarious and largely invisiblised migrant workers in public institutions against exploitation by outsourcing giants such as Sodexo are not only important in themselves but also a vital part of the fight against racist border policies, argues Laura Wormington.

At 5am on a frosty Tuesday morning, 19 November 2019, hundreds of Sodexo cleaners and porters at University College London (UCL) stood at the campus gates and refused to sign on for work. Organised by the Independent Workers’ union of Great Britain (IWGB), their strike to be brought in-house by UCL followed a decade of campaigns by mostly migrant workers at London-based public institutions demanding an end to contracts with third-party outsourcing facilities management (FM) corporations like G4S, Serco, and Sodexo. But the exploitation of migrants by FM companies extends beyond the context of the workplace. The remit of these FM is broad, not only limited to cleaning and catering services, but also encompassing security provision, management of immigration removal centres and prisons, and pioneering the development and implementation of security and surveillance technologies. This article focuses particularly on French multinational Sodexo, one of the largest FM companies in the world, operating in 72 countries and employing approximately 34,000 people in the UK alone. In mapping how such companies both exploit and reproduce the precarity of migrants and racialised groups, in this way maintaining a crucial facet of the architecture of the UK border regime, it situates the acts of resistance that have arisen in response to outsourcing as integral to the ‘no borders’ struggle.

In the context of the ‘hostile environment’ and a labour movement that has historically branded them unorganisable, migrant workers in the UK are highly precarious —living at a heightened proximity to destitution, detention, deportation, and death. Outsourcing employment contracts facilitates profiting from such precarity; it provides employers with a workforce that is smoothly expendable. The incorporation of a third party employer alienates already invisiblised workers from their workplace, obscures employer accountability, and allows contractors to absolve themselves not only of the management of ancillary workers on their own premises, but also of the duty of care and respect for their terms, conditions and rights. The global market for outsourcing FM is booming and estimated to be worth $1 trillion by 2025, yet these multi-billion-dollar multinationals are notorious for cutting costs by exploiting workers through underpaying, overworking, skimping on safety equipment, repressing any trade union activity, and operating with apparent incompetence that results in missing pay cheques and under-calculated annual leave or sick pay, while the public institutions in which they operate keep their reputations clean. 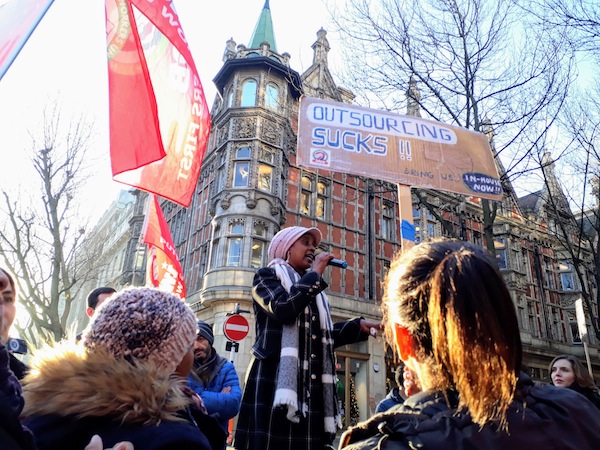 Outsourcing to companies like Sodexo invariably creates a two-tier workforce in which a radical discrepancy in material working conditions plays out along lines of class, race, often gender, as well as relation to citizenship. Cleaners, porters and caterers at St Mary’s Hospital, Paddington, mostly women and almost entirely migrant workers from the Philippines, Lithuania, Portugal, Sierra Leone, and Brazil, were outsourced to Sodexo until April this year, during which time they were excluded from the NHS pension scheme, paid far less than in-house NHS employees and forbidden from using NHS canteens and staff rooms. A Sodexo porter at UCL for 11 years, Ciaca Carvalho, told the Guardian last year, ‘We are forced to work even if we are not fit to work,’ referring to the lack of occupational sick pay for outsourced UCL workers. ‘We work in the same building–we deserve to get the same benefits as everyone else.’ Outsourcing in this sense is racism as articulated by Ruth Wilson Gilmore, ‘the production and exploitation of group-differentiated vulnerability to premature death.’ [1]

A precarious relationship to citizenship means employers of outsourced BME and migrant workers are able to wield the threat of state control to further their exploitation. In 2010, when outsourced cleaners campaigned for a living wage at the School of Oriental and African Studies (SOAS), adjacent to UCL, SOAS and the outsourcing FM company ISS infamously colluded with the Home Office to orchestrate an immigration raid which resulted in nine cleaners being deported. In March 2019, Sodexo announced to outsourced cleaners at UCL the introduction of a new Time Management System which would require them to clock in and out using biometric fingerprint technology—from which in-house staff were exempt. The cleaners and the IWGB, a union representing precarious workers, publicly objected to the scheme, criticising its discriminatory nature and the potential for data-sharing with the state, and held a flash protest during a management meeting, eventually causing it to be cancelled.

It follows that corporations like Sodexo, which profit directly from the precarity of migrants in the workplace, also hold a stake in the dehumanisation of migrants at state level—which in the UK translates to encompass black and brown British citizens, as incidents like the Windrush scandal have shown. Indeed, as austerity measures have led to the outsourcing of immigration enforcement, many of the major FM corporations operating in the UK now hold contracts with the Home Office for services that uphold the architecture of the UK border. From 2001-2009 Sodexo ran Harmondsworth and Colnbrook Immigration Removal Centres, where riots erupted in 2004 and 2006 over inhumane treatment, and where in 2007 there were a total of 81 incidents of self-harm requiring medical attention. In 2017, Sodexo’s ASPEN card, a smart debit card for streamlining government welfare payments, was rolled out nationally to asylum seekers with rejected and ongoing applications. As it later transpired, the cards had been microchipped, allowing the Home Office to track recipients and terminate the payments of anyone who left their ‘authorised’ city where they’d been given temporary housing. Sodexo’s ongoing management of five UK prisons, meanwhile, offers an overwhelming dossier of abuse and neglect, to which the tragic deaths of Natasha Chin and Annabella Landsberg, two black women who died prematurely in separate Sodexo prisons in 2016 and 2017, attest. 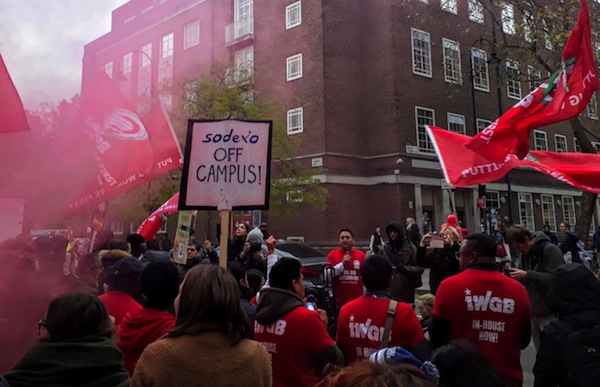 Importantly, the exploitative endeavors of outsourcing FM companies have been met with significant resistance. Above-mentioned examples include the Harmondsworth riots of 2004 and 2006, the refusal of UCL cleaners to participate in a fingerprint monitoring system, and the multitude of anti-outsourcing campaigns throughout London over the past decade —notably including, in late 2019, a nine-day strike by outsourced workers at St Mary’s Hospital, London, and their union, the United Voices of the World, which achieved the in-housing not only of St Mary’s workers, but also of 1,000 porters, cleaners, and caterers across the Imperial Trust who had been previously employed by Sodexo.

Those who resist in these ways, along with the new grassroots migrant-led unions that often support them, subvert the dehumanising stereotype of migrant workers as docile and unorganisable, and identify employers as the driving force lowering wages, rather than workers. In doing so, they challenge the logic of their exclusion by the state. The labour movement in the UK has a significant way to go in confronting both anti-migrant sentiment and the assault on workers’ rights through outsourcing. In this it must take its lead from those already resisting from within, and it must do so not only to defend working conditions, but because such efforts are integral to the anti-racist struggle against the inhumane border regime itself.

The coronavirus crisis of 2020 has highlighted the detrimental effects of outsourcing to companies like Sodexo. Recent relaxations in outsourcing laws have allowed the government to bypass the tendering process and offer a handful of FM companies including Sodexo £1bn worth of contracts to run Covid-19 testing centres. Already, a whistleblower at a Sodexo-run centre has reported missing tests, delays, and defective protective equipment. Meanwhile, at the Ministry of Justice, Emanuel Gomes, an outsourced cleaner who was denied anything more than statutory sick pay, forcing him to continue working with suspected Covid-19 symptoms, died shortly after work on 23 April. The grip of outsourcing FM companies on the lives of the vulnerable continues to tighten; we must resist them at all costs.