Below we interview a member of the Danish group MedMenneskeSmuglerne (‘With the Human Traffickers’), about the criminal charges of ‘human trafficking’ those who acted in solidarity with refugees now face.

Reem Abu-Hayyeh (RAH): You are a part of a group called MedMenneskeSmuglerne based in Denmark. Could you please tell us a bit about the group? 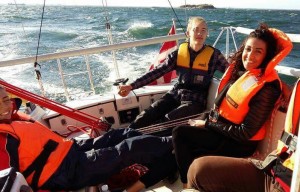 Reem El-Awwad (REA): The organisation is connected to Welcome To Denmark and was founded back in November 2015, in connection with the criminalisation of people who decided to take action when the state failed to, in September, by helping refugees in different ways. It was founded by a small group of people, which included myself, Mimoza Murati, Calle Vangstrup and Annika Holm Nielsen – the four of us were called into hearings with the police in the beginning of November and charged with smuggling. The rest of the group are not directly affected by the law on this area, but stand with us in solidarity.

RAH: Do you know what kind of charges and sentences those arrested for aiding asylum seekers to cross the border are facing, and who most of them are? We have read reports that many are young people, second-generation immigrants, without Danish passports.

REA: The sentence for smuggling can be a fine or up to two years in prison. It depends on how many times one has assisted a refugee in an illegal matter. That includes helping them cross the border, housing them or giving them a lift.

The last number of charged individuals, I heard, was around 300, but I’m not completely sure how many have been charged since September. A few have been convicted, and they’ve all received fines ranging from 7,000DKK to 22,500DKK (around £740-£2,400).

The people I’ve encountered who have been charged are a wide range of people: Danes, second generation immigrants, activists and politically engaged young people, elderly people, gang members and humanitarians.

Mimoza and I unfortunately do not have Danish citizenship. We haven’t been in contact with a lot of people that are in the same situation as us. Most of the people we’ve connected with are Danish citizens.

We haven’t heard of anyone transporting family members. The crisis sparked a movement in September, and the people were mainly motivated by the political climate.

REA: Either one is arrested during the act or is contacted by the police later and called in for interrogation. We were all called in for interrogation at the beginning of November, and charged with smuggling. Upon charge, fingerprints, DNA samples and mug shots are taken and one is let go, to await trial. We’re currently awaiting trial. The procedure is the same as with most criminal charges.

We, as an organisation and as individuals, do not regret our actions. It’s our democratic right and obligation to oppose unjust laws.

RAH: Do those without Danish passports who have been charged fear deportation, particularly with the Danish government extending penalty periods for citizenship for those committing offences?

REA: Depending on the size of the fine, one won’t be able to apply for citizenship for 5-10 years. Being unable to achieve citizenship puts the individual in a danger zone, because it makes deportation more likely if the laws change – as they do rapidly and often in Denmark, and not in favour of immigrants – or if one repeats an act of civil disobedience. Not too long ago, a young immigrant wasn’t granted citizenship because of his opinions on democracy.

RAH: Could you expand on this possibility of the withholding of citizenship for non-Danish citizens? 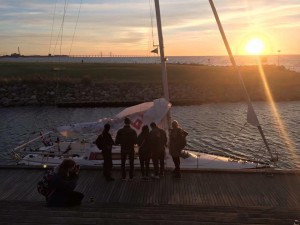 REA: Withholding citizenship is a common procedure, when one is charged and convicted of a crime. Depending on the penalty, citizenship can be withheld for years, even decades. In Denmark, there’s no automatic right to citizenship, just because one is born here. The only way to achieve citizenship is if one’s parents are Danish citizens or if one applies for it. Applying means signing up for a written test on Danish history and so on, and afterwards an interview to prove language skills.

RAH: What do you think has motivated all of these people helping asylum seekers across the border, particularly in the face of arrest and being charged? Do you think that many of them were already active in supporting asylum seekers or refugees, or was it the ‘refugee crisis’ and the various EU states tightening and/or closing off their borders which motivated people to act?

REA: I think everyone was motivated by different things. Some, by being up to date about the various EU states that closed off borders and treated refugees poorly; some by being up to date on the Syria issue and believing that refugees deserve a better life; some were motivated because they – as political activists – felt it was an obligation to act; some were caught off guard and felt they had to act when pictures of refugees walking on Danish highways were published, and some were probably motivated by a link with Syria.

RAH: What motivated you?

REA: A mixture of things, I’m a political being, and the war in Syria is a political war. In my opinion, the West has a huge responsibility there, because the actions of the western world have destabilised the Middle East and robbed the people of the standards that we live by here. It’s a human right to be able to live in a safe environment, have food and a roof over your head, and a future worth looking forward to. It’s obvious that these are not rights that Denmark is prepared to fulfil for refugees, and that was a motivation for me.

I’m of Arab descent – particularly Jordanian and Syrian. I don’t really have a personal relation with Syria, I’ve never been there and I don’t have a relationship with the part of family I have there. So for me it wasn’t a relation to Syria that motivated me to join the movement, but my relation to the region that has kept me wanting to be updated.

RAH: In the group’s experience, do you think that society or those in your community support and are sympathetic to what you did, and what the ‘human smugglers’ do?

REA: It depends on what community one looks at. We’re located in Copenhagen and Copenhagen is multicultural and on the socialist end of the spectrum. In our experience, we’ve been supported by our close environment, but Facebook shows a range of opinions. Some support us fully and are willing to donate money to cover our legal fees. Some feel empathetic towards refugees, but believe that the law is to be respected and we’re getting what we deserve. Some blatantly want us to suffer as much as possible.

The latest elections showed that about 25 per cent of Danish voters voted for a racist party (Dansk Folkeparti, the Danish People’s Party). The political climate in Denmark is oozing with racism. Yet in Copenhagen, around the crisis last year, around 45,000 people showed up for a protest in favour of the refugees.

RAH: What other forms of resistance are there in Denmark to the government’s policies on refugees and the hostile environment they are creating?

REA: There have been and still are various protests against the policies on refugees and ‘human smugglers’. At the end of last month there was an action in which a group crossed the border to Germany to show resistance towards the border controls. There have been marches to show disapproval, and concerts to raise money for the asylum seekers in Denmark.

MedMenneskeSmuglerne (‘With the Human Traffickers’)

I believe Profits is for web marketers only.