Spelling out the rights migrants need: from testimony to manifesto

The testimonies of migrant and refugee groups at the Permanent Peoples’ Tribunal London hearing continue to shape the PPT’s work, writes a member of the London steering group, who introduces its draft manifesto.

For people who have only recently come to the discussion about the existence of structural racism in the UK, the public health emergency instigated by Covid-19 has been something of an eye-opener.

Revelations about the risks that black and minority ethnic healthcare workers run as they go about their frontline jobs made a vivid impact on the public imagination as millions turned out to applaud ‘NHS heroes’. But structural racism has not limited its impact to BME people working in hospitals and GP surgeries. Public Health England’s review of the risks of Covid-19 to specific groups found high levels of deaths among BME communities, with at least some of the enhanced risk attributable to racism. Evidence of discrimination has also shown up in the statistics for the enforcement of social distancing rules during the period of lockdown.  Analysis by Liberty Investigates demonstrated that BME people in some parts of the country were almost seven times more likely to be fined for alleged breaches of the rules than white people. It cites incidents of penalties being imposed on grounds that were not supported by law.

When it comes to the risk of poverty and hardship, the evidence is even starker. The Treasury-funded furlough scheme as well as the social security system have excluded an estimated 1.4 million people from emergency support during the lockdown because of immigration conditions stipulating ‘no recourse to public funds’. For this group of people, getting through the hard weeks of having no wages or other income has meant dependency on the impromptu community support networks which have handed out food parcels to prevent starvation.

As these facts were laid out before the public over the past weeks, anger at the evidence of institutional racism fuelled the surge of protests associated with the #BlackLivesMatter movement.  The spark was the death of George Floyd at the hands of Minneapolis police officers, but it was fuelled by the anger of black and ethnic minority millennials/ GenZ and their white counterparts for whom police violence and structural racism have become emblematic of the inequality and injustice of the entire system.

The focus of the Permanent Peoples’ Tribunal (PPT) 2018 work on violations of the rights of migrant and refugee people was the way in which the experience of people in black and minority communities has been shaped by the specific practices of immigration control.  Although these are meant to be directed solely against people who do not have British citizenship, the realities of class and community in Britain have seen ethnicity conflated with immigration status, making all people of colour the object of suspicion on the part of the authorities responsible for immigration enforcement. Though the Tribunal did not anticipate Covid-19, its investigation of the forms of disadvantage imposed on BME communities by decades of punitive immigration policies goes some way to explaining why the pandemic has hit these groups so hard. 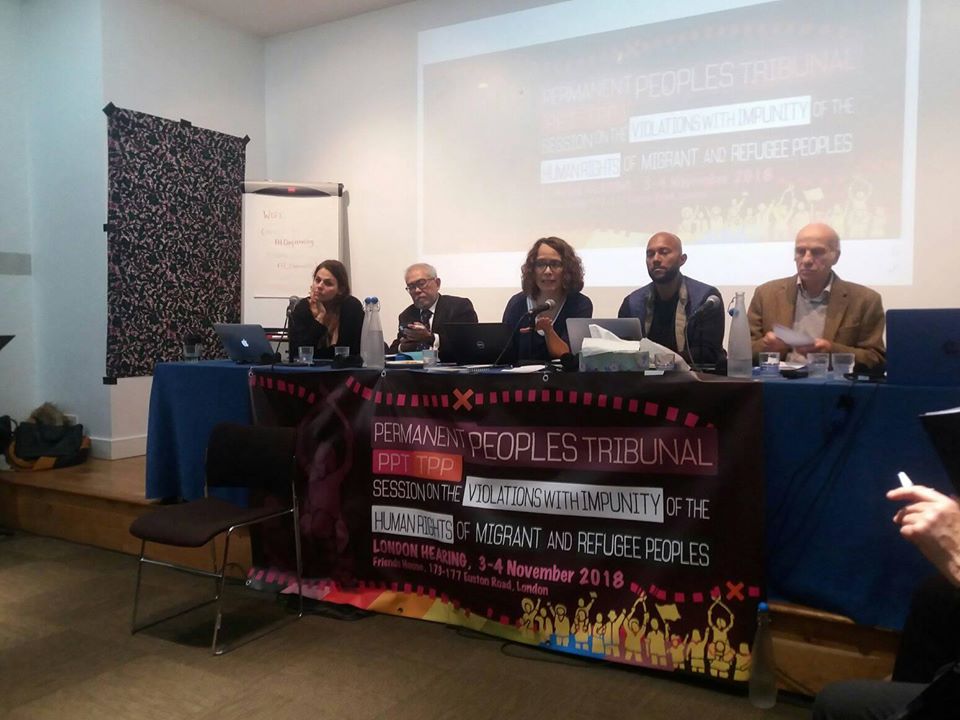 The PPT itself has its deep origins in protests against the Vietnam war in the 1960s. Its work nowadays is coordinated by a secretariat based in Rome which considers applications from social movements having a claim as witnesses of social injustice, and it proceeds by assembling a panel of jurists with expertise in matters concerning human rights, to adjudge alleged violations. The London hearing was one of a series of evidence sessions (the others were held in Barcelona, Palermo and Paris) on violations of the rights of migrants and refugees.

An ad hoc steering committee organised the London hearing, including amongst others, the migrant domestic worker support group Waling Waling, Global Justice Now, Unite the Union and the Institute of Race Relations. The steering group drafted an indictment of the ‘hostile environment’ immigration policies administered by the Home Office, emphasising their systemic character and their role in generating precarity, exploitation and destitution. The hostile environment is not the accidental product of a poorly designed system, but a trap for hundreds of thousands of people seeking eventual settlement, who must endure years of struggle against types of employment which, although essential to the economy and society, are generally low-paid and often abusive in terms of workplace practises.

Constrained by the terms of a conditional immigration status, migrants and refugees frequently find it impossible to move on in careers they are otherwise qualified to undertake. Those having only 30-month limited leave stand at the back of the queue for higher-grade or even decent employment, regardless of skills, qualifications and seniority in their home country, while those with no leave, or no right to work, but who cannot return home, are condemned to the worst forms of exploitation. The ‘no recourse to public funds’ (NRPF) condition means that low-wage jobs cannot be supplemented by the means-tested welfare benefits that citizens in a similar predicament can claim.

The systemic character of the hostile environment

In its deliberation on the evidence, the jury found the charges in the indictment proved, agreeing that ‘new forms of exploitation’ have been created which are manifested in ‘patterns and continuities across countries, communities and sectors’.  It held that the hostile environment creates conflicts ‘between legal, moral and ethical obligations and the imperatives of immigration enforcement, for teachers, doctors, social workers, employers and landlords, through their conscription as agents of immigration enforcement’. The corporate nature of this enterprise has led to ‘collusion between governments, corporations and wealthy employers’, seen in the ‘contracts for detention and asylum housing … the waiver of minimum wage rights permitting exploitation of detained migrants; the domestic workers’ ‘visit’ visa; and the use or threat of immigration enforcement against workers attempting to organise or unionise’.

Since the Tribunal, the steering group has published the evidence submitted by migrant groups, rights campaigns and trade unions in a book, organised a joint conference with Bristol University on the erosion of migrant rights, and joined public protests in Downing Street and outside the Home Office in London.

In considering the lessons learnt from the work around the London hearing, the steering group has recognised the importance of a solid baseline for the social, economic and political rights that need to be incorporated into migrant and refugee status, to provide a higher degree of protection from the risks of exploitation and economic impoverishment, and to ensure that migrants have the guaranteed assurance of a place within civil society to represent their legitimate interests through democratic channels.

The first step in making the case for the social, economic and political rights of migrants is to establish a consensus across committed supporters as to what this would look like in practice. To this end, the steering group has drafted a Manifesto for migrant and refugee rights, which it is making available for wider discussion.  The draft can be viewed here.

What is distinct about the approach of this manifesto it that it sets out an argument for rights which brings to the forefront the position of the communities established by migration over the last seventy years. The neighbourhoods associated with generations of migrant settlement, though now populated in the main by BME British citizens, are still seen by the immigration authorities as places where rule-breaking is rife and random status checks a productive way to catch people deemed to be ‘illegal’. Public transport hubs and workplaces known to employ casual labour are prone to raids and demands for evidence of legal status.  Hospitals, schools, and local authority social services also have a gatekeeper function imposed on them which effectively places the whole community under surveillance. 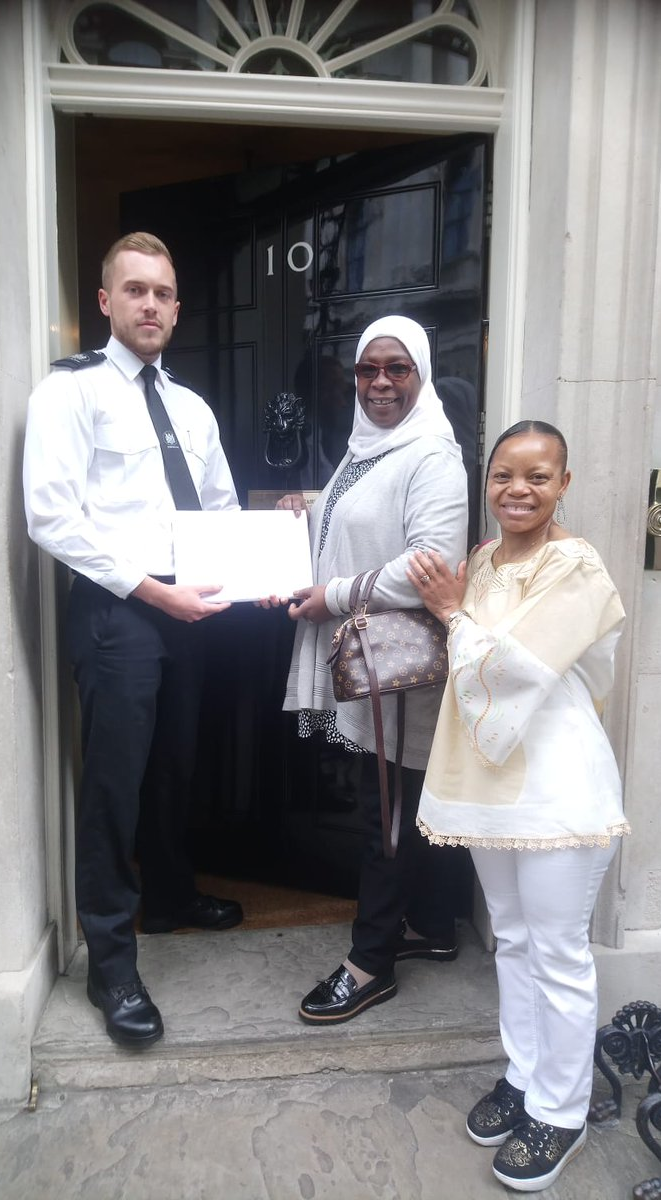 The Manifesto is a call for the defence of migrant communities in British society, in addition to remedying the injustices inflicted on individuals. While supporting calls to end the hostile environment, it goes further by insisting on the ‘crucial need to acknowledge the rights which ought to belong to everyone present in society to work, study, support families and engage in the life of communities and civil society without being subjected to discriminatory and racist laws that are intended to leave us without power to resist exploitation and abuse’.  It envisions not merely a return to the days before the introduction of hostile environment policies, but a rights-based approach to immigration policy which empowers migrant and refugee people and provides the political and social space where they can assert their interests against those of the state.

Immigration control policies have come to function as a means to trap hundreds of thousands of people in lower-paid, insecure employment and to deny them the relief from hardship (however attenuated) available to citizens through social security, social housing and public services. The Manifesto envisions ‘an unambiguous right of residence for everyone living in the country as a worker, a family member, or in need of a safe haven’ – a secure status enabling migrants and refugees to ‘resist low pay and exploitative conditions, to provide decent housing and living standards for our families and to enjoy unquestioning access to healthcare and other benefits, thus lifting work standards, public health and social cohesion for all’. The charging of extortionate fees and health surcharges which have driven thousands into poverty must end, together with the ‘no recourse to public funds’ rule.

Most ambitiously the Manifesto calls for ‘not just the retention of the freedom of movement principle that underpinned the rights of migrants from EU countries, but for a commitment to extend this principle to citizens of other nations’.

The peculiar circumstances of the coronavirus pandemic have given us space to devote time and energy to clarifying the political basis for work in support of migrants and their rights. But the discussion around the Manifesto is intended to lead within a very short time to definite action, which will translate ideas about the rights migrants need into interventions aimed at challenging the authority of the institutionally racist state. In recent months, there has been a step-up in migrant and rights initiatives, with other groups such as Migrants Organise also initiating discussions around a rights-based approach. With this in mind, we invite you to join us in developing this conversation, and help us to move more rapidly into a campaigning stage.