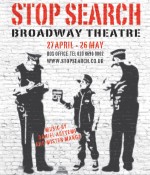 In a nutshell, Stop Search, plays out the devastating impact that the policy of stop and search can have on a family.

This excellent new play shows a black middle-class family whose young teenage son is keeping a secret – his daily interactions with the police and a collection of over thirty records of being stopped and searched. As a result, he harbours a hatred for the police officers who carry out the stops. The repeated stop and searches drive the once placid and innocent youngster to a moment of madness that has far reaching consequences. His parents are left surprised at the extent of the problem. However the reality of many young black boys on the street is that stop and search is no surprise at all – it is a routine part of life in certain areas.

The format of the play is not linear but moves between past memories and present incidents. In some scenes there was a lot going on and, as a result, some of the voiceovers were a little hard to hear and therefore a little hard to connect to the action and sequence of the play. It is creatively staged in an intimate space with good use of the sound and imagery that make up everyday life (mobile phones, background chatter and flashing lights). I saw the play on only its second night, which may explain why some of the performances were a little patchy but there were also some excellent eloquent speeches/ monologues. The young actors, one of whom was making her debut, give excellent performances.

At the start of the play, a chance encounter at a restaurant turns into something darker as the parents of a police officer overhear a conversation. The mother of the police officer cannot imagine that stop and search powers could be abused and suggests it is simply something people should put up with as she butts in to the private conversation of the black couple. Her husband, the borough commander, a study in officiousness, cold, steely and detached power, silently seethes and bristles as his officers are criticised.

His son, despite being a relatively naïve police officer, still knows and remembers all the motions he must go through in order to effect a cover-up. (Is this taught at Hendon Police College?) He plays an officer under the weight of family expectation convincingly, ballsing up his career in spectacular style and ultimately complicit in a heinous act.

The play reveals the end of innocence as the events unfold. It is the dawning realisation, faced by the black parents, that the police are not there to protect and serve that hits the hardest. They play the parents divorced from the reality faced by their children convincingly.

Stop Search tells the experience of a single young boy and his family. But the reality is that stop and search effectively targets and criminalises whole communities – a point made by two youngsters in the play. The ending is unexpected – and brutal – but then again, not so unexpected when you think about the inevitable consequences of the abuse of power.

The play is on for the rest of the month at Catford Broadway Theatre. Stop Search was written by Dominic J Taylor, directed by Thierry Harcourt, design by Libby Watson, lighting design by Andrew May and music by Daniel Adeyemi and Mister Manga. Supported by Stop Watch and the Open Society Foundation.