The Christchurch massacre – implications and developments 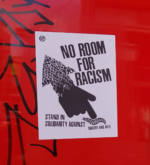 The terrible events in Christchurch, New Zealand, which left fifty people dead and fifty people injured, reverberated across the UK.

Below we provide a round-up of the most important developments, drawing particular attention to criticism of the media, online posts in support of the perpetrator and attacks on Muslims across the UK. We also draw attention to the European dimension.

15 March: In the 74-page manifesto, published shortly before the massacre, the perpetrator describes himself as of ‘Scottish, Irish and English stock’, calls for the ‘removal’ of Sadiq Khan, declares support for Finsbury Park mosque killer Darren Osborne, and alludes to the Rotherham ‘grooming scandal’. A number of references are made to the Norwegian mass murderer Anders Behring Breivik, and other European ‘partisans/freedom fighters/ethno soldiers’ who have taken a stand against ‘ethnic and cultural genocide’. (ITV News, 15 March 2019; Express, 15 March 2019; New York Times, 19 March 2019)

15 March: MailOnline, the Mirror and the Sun admit that decisions to host edited versions of the footage of the Christchurch massacre was a mistake and remove the videos. MailOnline delete the suspect’s manifesto after being accused of spreading terrorist materials. (Guardian, 15 March 2019)

15 March: The BBC faces criticism for airing a conversation between one of its reporters and the leader of the British branch of far-right Alternative Right group Generation Identity in a discussion about the Christchurch massacre. (i News 15 March 2019)

15 March: Officials in Turkey, Bulgaria and Greece begin investigating the Christchurch killer’s travels through their countries in 2016 and 2017. (Guardian, 18 March 2019)

15 March: The mother of Ebba Akerlund, an 11-year-old girl killed in  Stockholm in Sweden, April 2017, in an Islamist-inspired  terrorist incident, condemns the New Zealand attacks and says  that she finds ‘it extremely tragic that Ebba’s name is being misused in political propaganda’. (France 24, 15 March 2019)

15 March: Swedish Youtube star, PewDiePie, who has the most highly-subscribed channel in the world and has been accused of racism and support for the far Right, issues a statement saying he is ‘absolutely sickened’ that his name was used by a suspect who was heard on a video shooting saying ‘Remember, lads! Subscribe to PewDiePie’. (Independent, 15 March 2019)

16 March: MI5 begins investigating the links between the Christchurch suspect and the far Right in Britain. (The Times, 16 March 2019)

16 March: Sammy Woodhouse, a victim  of sexual abuse in  Rotherham condemns the ‘evil act’ at Christchurch and says the terrorist attack was ‘not done in our name’, a reference to the ‘For Rotherham’ message inscribed on the gunman’s ammunition. (Daily Mirror, 16 March 2019)

16 March: A 24-year-old man from Oldham is arrested for making a post on social media in support of the Christchurch attack. (Bolton News, 16 March 2019)

16 March: Swastika graffiti is found on a wall in Cheney School in Headington, Oxford, alongside a message to ‘SUB 2 PewDiePie’. The alleged killer had said ‘subscribe to PewDiePie’ moments before he began shooting the previous day. (Oxford Mail, 16 March 2019)

16 March: Italian interior minister Matteo Salvini tells a press conference that ‘Islamic extremism’ is the only threat facing Italy and that ‘far-right and left-wing fringes’ are under control. He then condemned the Christchurch attacks and asked for ‘compassion’ for anyone who might blame him for the killings. (The New Arab, 16 March 2019)

16 March: Renaud Camus, the French author responsible for the theory of ‘The Great Replacement’ in his 2011 publication and was found guilty of inciting hatred against Muslims in 2015, denounces the Christchurch massacre as ‘appalling’ and dismisses the idea that he influenced the alleged killer. (Channel News Asia, 16 March 2019)

17 March: Front National leader Marine La Pen, whose defeat in 2017 caused the Christchurch killer to ‘despair’, tells France 3 Television that she never used the phrase ‘The Great Replacement’ and that she did not even know what it meant. (Washington Post, 19 March 2019)

17 March: Britain’s counter-terrorism chief warns that sharing the killer’s livestream of the massacre may result in jail time for disseminating ‘terrorist propaganda’ that could inspire further attacks. Home Secretary Sajid Javid and shadow digital secretary Tom Watson accuse social media platforms like Youtube and Facebook of doing too little to halt the spread of the footage. (The Times, 17 March 2019; ITV News, 15 March 2019)

17 March: A 33-year-old man and 34-year-old woman are arrested in Queensway, Rochdale, on suspicion of racially aggravated public order offences after reports that they abused and threatened a cab driver with reference to the Christchurch massacre. (Manchester Evening News, 17 March 2019)

17 March: Police announce that they are investigating a stabbing in Stanwell, Surrey on Saturday as a possible Christchurch-inspired ‘terrorism incident’, following reports that the attacker shouted ‘kill all Muslims’ and ‘white supremacy rules’. A 50-year-old man has been arrested on suspicion of attempted murder while the 19-year-old victim remains in hospital. (Guardian, 17 March 2019; Telegraph, 18 March 2019)

18 March: As security minister Ben Wallace says that a far-right massacre of Muslims ‘absolutely could happen here’, UK Muslim leaders call on the government to provide funding for mosque security in the same way that it did for Jewish institutions, which received £14m to support 400 synagogues and 150 schools, after a rise in antisemitic attacks.  (Guardian, 18 March 2019; Guardian, 18 March 2019)

18 March: On his way home from a meeting at Regent’s Park mosque, Finsbury Park imam Mohammed Mahmoud, known and praised for preventing community retaliation against the Finsbury Park mosque killer Darren Osborne in June 2017, is called ‘despicable’ and a ‘s***hole’ while on the bus and later spat at by a cyclist. (Evening Standard, 19 March 2019)

19 March: In response to calls the previous day for increased security funding for UK mosques, the Home Office doubles the annual Places of Worship Protective Security Fund for religious institutions to £1.6 million and opens a £5 million fund for security training, though Muslim leaders still say this is not enough. (Independent, 19 March 2019)

19 March: A 31-year-old man from Newport is arrested by Gwent police for allegedly posting material on social media relating to the Christchurch massacre that is ‘threatening, abusive or insulting and likely to stir up racial hatred.’ The man has been released pending further investigation. (Wales Online, 19 March 2019)

20 March: Counter-terrorism chief Neil Basu says that far-right terrorists are being radicalised by mainstream newspaper coverage, singling out the Mail Online, the Sun and the Mirror for uploading footage of the massacre and/or uploading the manifesto. (Guardian, 20 March 2019)

21 March: Facebook which, alongside YouTube, initially defended its response to the Christchurch terrorist attack, now says that it did not deal with the attacker’s live stream quickly enough because it was not reported as a video of a suicide. (Guardian, 21 March 2019)