A new book on Belgium, Guantanamo chez nous?, is an important contribution to the analysis of racism and the war on terror in Europe.

It would be hard to find anyone in the UK who has not heard of Abu Qatada. But how many people know that he was recently acquitted of terrorist charges in Jordan? The story, the person behind the name is unknown – he has become an icon of ‘Islamist terrorism’, a dehumanised trope which is fed by and in turn feeds rampant anti-Muslim racism, and is used to justify ever-increasing securitisation (more surveillance, more police powers) and attempts to de-universalise basic rights, to make them contingent on behaviour and not ours by virtue of our common humanity. The demonisation is so powerful that it renders impossible any rational argument about Qatada’s actions or his treatment by the justice system; any suggestion that his eleven years’ detention and deportation was unjust would be seen as either very misguided or symptomatic of support for terrorism.

Nizar Trabelsi is Belgium’s own Abu Qatada. In September 2001 he was arrested and charged with conspiracy to attack a NATO air base in Belgium. He was sentenced to ten years imprisonment which he served, only to be extradited to the US to face further charges based on the same incidents. In this book, Luk Vervaet enters the lion’s den, arguing that Trabelsi’s punishment has been disproportionate and his treatment unjust, an injustice made possible by the processes of racist dehumanisation which, post-9/11, engulfed the already marginalised north African-origin Muslim community in Belgium. 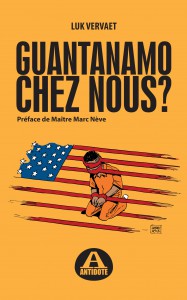 Racism is, in the final analysis, injustice, and in Guantanamo chez nous? (Guantanamo in Belgium) Vervaet describes the deepening injustice towards its Muslim citizens brought about by Belgium’s co-option into the US-led war on terror and the resulting securitisation and ‘Guantánamisation’ of Belgian society. The book interweaves the story of Trabelsi’s imprisonment and his October 2013 extradition with the bigger story of which it forms part, with chapters dealing with Belgian complicity with the CIA’s extraordinary rendition programme (through authorising the use of its airports and air space); the government’s failure to protect its Muslim citizens ‘rendered’ to Guantánamo or subjected to torture in Morocco, which mirrors their neglect and exclusion at home in Belgium; the huge growth in the prison estate and the adoption of techniques condemned as inhuman or degrading treatment for the control of prisoners; the difficult issues raised by young Muslims going off to Syria or Afghanistan and the ban on suspected Islamist sympathisers exercising a profession.

Initially, Belgium was a critic of the US invasion of Iraq. But when campaigners sought to prosecute General Tommy Franks in Belgium for war crimes arising from the Iraq invasion, under laws of universal jurisdiction accepted by Belgium, the US threatened a trade boycott and the removal of NATO headquarters from Brussels. Under such direct and blatant pressure, parliament amended, then revoked the universal jurisdiction law, allowing Franks to go untried. This was the beginning of a ten-year slide from universalist and rights-based principles. The mighty were above the law; the lowly, or in this case the dehumanised Trabelsi, beneath it. His extradition, a decade later, is to face charges based on the same incident, in breach of the principle that no one should be tried twice for the same offence; it took place in breach of a stay imposed by the European Court of Human Rights; and it followed twelve years of a prison regime featuring almost constant isolation, in breach of prison policy and to the condemnation of the Council of Europe Committee on the Prevention of Torture.

Vervaet’s analysis of terrorist incidents in Europe is telling, demonstrating the minuscule proportion of such incidents which can be described as ‘Islamic’ in motivation and the total lack of even-handedness vis-à-vis terrorism of the extreme Right. He is angered by the criminalisation of young Muslims who go to fight dictatorship in Syria or occupation in Afghanistan or Iraq, as against the impunity for volunteers recruited to the Israeli Defence Force, and for mercenaries who fight anywhere. But perhaps some of the most valuable parts of the book are those where Vervaet examines prisons, prison regimes and the changes in prison policy – subjects he discusses with the fluency and authority of the insider. It is in the prison system and the way Muslim ‘national security’ prisoners in particular are treated that we see the way dehumanisation and racism corrode decency.

Belgium used to have a progressive prisons policy, with few prisons and no high-security units or isolation regimes. But the justice minister who in 1996 announced that prison didn’t work and proposed an ambitious ‘alternatives to prison’ policy, who signed his country’s formal abolition of the death penalty, later presided over the opening of high-security units in two prisons. He signed the warrant for Trabelsi’s extradition to a supermax future in the US, and under his watch, the Council of Europe condemned Belgium for its use of ‘white torture’ methods – deafening music and opaque goggles – on detainees during transfer, and for the conditions of detention for prisoners in the isolation regime. In July 2010, the Council of Europe’s Committee for the Prevention of Torture reported that the high security regime, designed for ‘unmanageable’ prisoners with ‘extreme, persistent behaviour problems … posing a threat to staff and/ or other inmates’ was being misused, within months of its inception; Trabelsi was one of five of the eight prisoners in the Bruges unit, and six of the nine at Lantin, who should never have been put there. Unabashed, the justice ministry has now signed off a massive prison construction programme, including Belgium’s first dedicated high-security prison.

Whether Trabelsi’s initial prison sentence of ten years was proportionate to the conspiracy he was said to have hatched alone, is a vexed question. But there can be no doubt that his treatment in the criminal justice system stands as a template and exemplar for the racist dehumanisation of Muslims in Belgian prisons and in its wider society. From his receipt of the maximum sentence possible for a terror attack, despite his plea of guilty and the fact that the plan was never implemented, to his years in the isolation regime, which led to physical and psychological damage, through his endless, wearying struggle against official obstructions for permission to marry, with the political and media portrayal of his fiancee as a dangerous terrorist, to the final trick – telling him, before the transfer to the military airfield and the CIA extradition flight, that he was being transferred to another prison where he could marry – all smack of vindictiveness, of injustice. This treatment culminated in the illegal extradition which is, for Vervaet and for Trabelsi’s lawyer Maitre MarcNeve (former vice-president of the Committee for the Prevention of Torture), who writes the preface, symptomatic of the disastrous slide from the values of universal human rights and the rule of law.

Vervaet’s own story, which he recounts as one among many cases of a new ‘Berufsverbot’[1] or politically-inspired dismissal from work, stands as an example of the new McCarthyism which brands all attempts to understand or to reconcile as ‘enemy propaganda’ and ‘support for terrorism’. A teacher of Dutch to prisoners, he found himself banned from all Belgian prisons – and so deprived of his livelihood – in August 2009, for ‘reasons of national security’ which were never spelled out. Although he won his case against the lack of reasons for the ban in the Constitutional Court, he has never been compensated for losing his livelihood. Another man, who organised football matches for prisoners for eighteen years, was banned on the basis of a false rumour that he intended to help Trabelsi escape – despite having never met him.

Vervaet takes issue with the Left’s passivity, its impotence, its failure to challenge all of this and in some instances its complicity. He points out that Belgium, as a tri-lingual country which has been a battlefield in two world wars, has a unique legitimacy and moral authority to resist involvement in the new imperialist wars. His message is: wake up from your silence, your indifference – Belgium can stand for peace, for dialogue.

His analysis of the ‘Guantánamisation’ of Belgium, and his message, resonate in Britain, with our history of racialised monsters and injustice, from the Birmingham Six to Winston Silcott. In common with much of Europe, we too see the demonisation of Islam and its followers, the mobilisation of enormous resources to detect and punish so-called supporters of terrorism in racialised groups – and with these trends, the erosion of principles of universality in human rights and equality before the law.

Vervaet’s book needs to be widely read, and – as its currently available only in French – to be translated into English.

Luk Vervaet, Guantanamo chez nous? Antidote, 2014 (available from www.antidote.be for €15.50). [1] The original Berufsverbot was a ban on Jews working in various professions in Nazi Germany in the 1930s. It was revived for use against Communist sympathisers in West Germany in the 1970s.

August 1, 2014
/ The ‘Guantánamisation’ of Belgium, a review of the book “Guantanamo chez nous ?” by Frances Webber: