‘We are the Lions Mr Manager’ is a small but perfectly formed play which tells the story of the Grunwick strike. 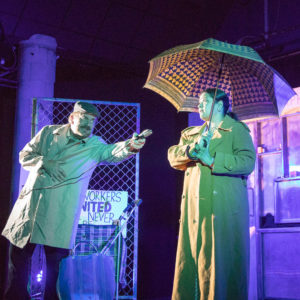 A two-hander, it tells a digested version of the Grunwick saga, a major moment in labour history which seems to have faded in the collective memory.

The work of the Grunwick 40 campaign over the last few years has been to retell the Grunwick story — of a group of migrant (overwhelmingly) Asian women who took on a factory owner, the unions and ultimately the state — in a fight for their basic employment rights. The Grunwick 40 project has resulted in a comprehensive exhibition and beautiful murals near the site of the factory in Dollis Hill and numerous events and meetings. And now there is a play. 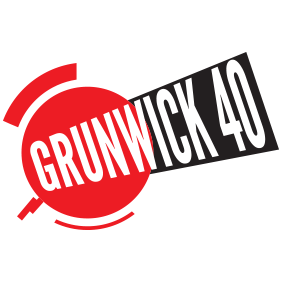 I saw We are the Lions Mr Manager (by Townsend Theatre Productions) on the press night at the gem of a south London theatre, Tara Arts, a charming and compact venue with beautiful carved antique doors and wall sconces in the garden. There was also a pre-show talk with Sunil Desai, (Jayaben Desai’s son), Amrit Wilson, Graham Taylor and Medhavi Patel (the actress playing Jayaben). Participants spoke about the wider Grunwick 40 project and about how the strike had involved many workers and received support from numerous avenues, from the miners and postal workers to feminists and black organisations. 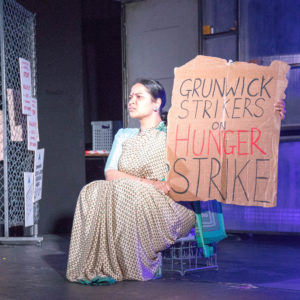 The play starts with Jayaben Desai’s arrival from India, and her story is told simply through poems and song. Just two cast members, Medhavi and Neil Gore, play all the roles, while staging the play and moving props, which is no mean feat. The play ran seamlessly with the two cast members and a complicated story to tell.

There is timely audience participation – we were invited to sing along with ‘Hold the line’ which runs through the play and chant slogans as if we were on the picket line with the strikers: ‘The workers united will never be defeated’ was chanted by all in the theatre.

There is humour and again, great acting, Medhavi’s George Ward (the owner of the factory) is terrifyingly George Gallowayesque. And Neil Gore, who also researched and wrote the play, is excellent in all of his many roles, from union man to the slimy Freedom Association wallah. 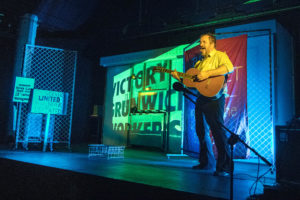 The ‘bitesized‘ chunk of the long and complicated Grunwick story which the play provides is told with humour, skill and empathy. And don’t be fooled into thinking this is just history — the Grunwick story has resonance today. The Durham teaching assistants, also fighting for a fair wage and conditions, call themselves the Lions after the Grunwick strikers and Jayaben’s Desai’s now legendary quote:

‘What you are running is not a factory, it is a zoo. But in a zoo there are many types of animals. Some are monkeys who dance on your fingertips. Others are lions who can bite your head off. We are the lions, Mr Manager.’

The play will be on tour till May 2018 and is a definite must-see. It is political theatre at its best. But it should be followed up by a visit to the mural and further reading on the strike – Grunwick is a story that needs to be told and retold so that people don’t forget these (mostly) women strikers, who were not driven by ego but by the notion of family and the wellbeing of the collective — they brought this ethos into the workplace and started a revolution.

Tour dates for We are the Lions Mr Manager

IRR News review of the Grunwick 40 exhibition: Brave and inspirational: the story of Grunwick

Finding a Voice: Asian Women in Britain by Amrit Wilson

Grunwick: The Workers’ Story by Graham Taylor and Jack Dromey