The London Clearances a background paper on race, housing and policing 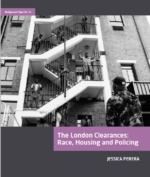 The moral panic over supposedly dangerous black, urban subcultures in London, emerges at a crucial time, argues the Institute of Race Relations (IRR) in a challenging background paper published today. The impact of financialisation on local authority housing is converging with location-specific intensive and intrusive policing. In The London Clearances: Race Housing and Policing, researcher Jessica Perera traces the overlap between attempts to gentrify so-called ‘sink estates’ and the criminalising of young black men, seen as an obstacle to such ‘regeneration’. She provides historical context to understand the current moment, analysing not just the  Estates Regeneration Programme of the current Conservative government, but the ‘positive gentrification’ policies of New Labour, as well as its creation of ‘ASBO Britain’. 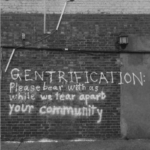 There are thousands of people waiting for housing across the capital, and yet new housing developments are not being built to meet their needs. Instead, the report reveals how ‘regeneration’ projects are being used to actively dispossess working-class and low-income families of their homes. This process, often referred to as ‘social cleansing’, has previously been understood as a class issue. But the fact that BAME families are over-represented in social housing in the capital and highly racialised language was used to describe London’s post-war housing estates in the aftermath of the 2011 riots, would strongly suggest, the IRR argues, that this is also a race issue.

IRR researcher Jessica Perera says, ‘this is a replication of the government’s “hostile environment” policy. Instead of the policy being a prelude to moving people out of the country, it is, at a local level, a prelude to decanting BAME families from local authority land.’ For Perera such localised hostile environments, administered by a range of state institutions (local authorities, housing associations, social services, schools, police) denotes the way policing in London today is being organised around the project of regenerating London and, in turn, gentrifying it.