The spiralling dynamic of fear – and how to fight it

Frances Webber reviews Corporate Watch’s new report: ‘Who is immigration policy for? The media-politics of the hostile environment’. 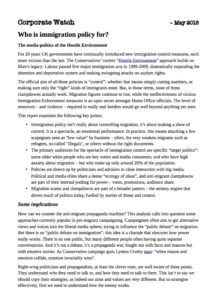 The central thesis of this closely argued and compelling report, Who is immigration policy for? The media-politics of the hostile environment, is that the purpose of tough immigration policies is not to control immigration – ‘deterrent’ policies don’t deter anyone, after all – but to make a show of toughness towards migrants, for the 20 per cent of voters who are very hostile or anxious about immigration. Anti-migrant policies emerge from the dense ecology of ideas produced by the close interaction between politicians and ‘big media’ and fed by far-right sources, as part of the ‘politics of fear’ dominating society.

This is by no means the first report highlighting the mutually reinforcing nature of political, popular and media racism, and the narrow electoral objectives of immigration policy. But it builds the arguments with great clarity and detail, particularly on the way the electorate is segmented for political targeting and the relationships between politicians and media. In sixty well-sourced pages, the report, which is not attributed to a particular author, analyses in turn ‘public opinion’ and the electoral politics of immigration; the relationship between politicians and the media and the latter’s communication power; the role of corporations in politics and media; and the influence of the far-right parties and media outlets. After a look at ‘idea ecologies’ and the politics of anxiety, it concludes with some thoughts for resistance.

The causes of anti-migrant sentiment

According to polling firm Ipsos MORI, for several decades, around sixty percent of the British public have consistently said they want immigration to be reduced, although the importance of the issue to voters has fluctuated dramatically over the past four decades. The authors analyse the demographics, the cultural and economic concerns behind anti-migration sentiment, and a striking finding is the disparity between generalised and personal concern: the fact that far fewer people feel immigration is a problem locally than believe it is a national problem indicates the extent of political and media fabrication of migration as a problem. But politicians target only certain sections of the public on immigration: the so-called ‘key voters’, who are older, white, and either ‘comfortable but concerned’ suburban or rural voters, or working class people living in the north or midlands.

The Blair government played up its attacks on asylum seekers to demonstrate its toughness, while playing down the relatively liberal policies for economically beneficial migrants, including new EU workers and foreign students; the Brown government became more nativist, while Cameron and May, after a short-lived attempt to detoxify the Tories’ ‘nasty’ image (an early coalition policy was to limit the immigration detention of children) switched to fighting Ukip for votes on immigration with their attacks on EU ‘benefit tourists’ and their hostile environment policies against undocumented migrants. A feature of both parties’ policies is the apparently unchallenged belief that to defeat the far Right, its policies must be adopted rather than confronted – leading to the mainstreaming of rhetoric and policies born on the far right. 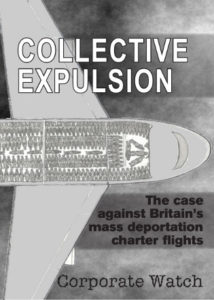 The role of the media is crucial. Its power was demonstrated in 2006, when a media campaign against home secretary Charles Clarke’s lack of toughness, demonstrated by the Home Office failure to deport hundreds of ‘foreign criminals’, resulted in his resignation and replacement by bruiser John Reid. The most infamous direct collusion between government and media was between the Blair government and the Sun, coordinating a crackdown on ‘asylum cheats’ with a solid week of anti-asylum stories in August 2003. The authors contend that most politicians are news junkies, talk to journalists daily, and that much policy is devised with an eye to how it will play in the media. The picture is of a virtually closed world of intense rivalries, ambitions, friendships and gossip – the worst possible environment for policy-making. 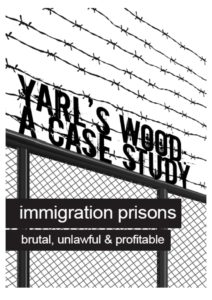 The media shape not just policy but also its public reception. And analyses of media content on immigration reviewed in the report reveal that the media overwhelmingly frame immigration in negative terms, as a threat. Thus politicians and media both reflect and enhance popular racism, creating a spiralling dynamic of fear, myth and prejudice, fed by groups like Ukip (represented on a quarter of all Question Time shows between 2010 and 2017), Migration Watch (another frequent contributor to the media’s ‘immigration debate’), and far-right sites such as Breitbart News, which together have moved immigration from a fringe to a mainstream concern and contributed hugely to the Brexit vote.

One conclusion with far-reaching implications for campaigners is that there is no ‘public debate’ on immigration but a propaganda war, fought not with facts and reason but with emotive stories. In the concluding section, the authors acknowledge that much pro-migrant publicity ‘preaches to the converted’ – and consider what strategies might work better. The final sentence reads: ‘To go up against anti-migrant stories, we will need to tell new stories that are more powerful, more convincing, more true, than [the] anxiety narratives’. As the report was being published, the stories of the Windrush pensioners and their travails at the hands of the Home Office became mainstream news, and for the first time ever, over-tough immigration policies led to a home secretary’s resignation. It may yet be possible to defeat the politics of fear.