The truth about far-right violence

As concerns mount about the violence of elected far-right politicians in Greece, and Sol Campbell warns black and Asian football fans against travelling to Poland and the Ukraine for Euro 2012, the Institute of Race Relations reveals that the problem of far-right violence is not confined to a few European countries. On the contrary, a new geography of racism is fast developing as extremists set up shop in rural areas, towns and city neighbourhoods in every country of Europe. 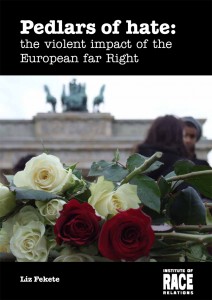 Pedlars of Hate: the violent impact of the European far Right brings together over 100 cases, mostly from EU countries, but also Switzerland and Norway, which documents patterns of violence, from the peddling of hate online and the drawing up of lists of ‘national traitors’, to violence, arson and murder on the streets, and the stockpiling of weapons in preparation for ‘race war’.

While the principal targets of far-Right violence are Muslims in western Europe and the Roma in eastern Europe, anti-black racism and anti-Semitism are also very much on the increase. And in a trend that is in danger of rapidly escalating as the economic crisis deepens, attacks on Social Democrats, Left politicians, academics and journalists that report on the far Right around Europe are intensifying too.

Amongst the 100 cases documented in this report:

Other cases documented in Pedlars of Hate reveal that the state services which should protect the public are failing, and in some of the most disturbing cases, colluding with the far Right. For instance:

‘We hope those politicians who respond to the economic crisis by offering nationalism or ultra-patriotism as a palliative will think again,’ said Liz Fekete, the author of the report. ‘In the 1930s, Jews were accused of having a “decadent culture” which was unpatriotic and cosmopolitan. Today, those nostalgic for a racially pure society use “multiculturalism” as a synonym or shorthand for cosmopolitanism, and this is another reason why those politicians who find a scapegoat for society’s ills in the multicultural society should think before they speak.’

Pedlars of Hate: the violent impact of the European far Right can be downloaded here (pdf file, 984kb)

For further information on the Pedlars of Hate report please call Liz Fekete at the Institute of Race Relations on 020 7837 0041.

Thankyou Liz a very informative if worrying report Clearly there is a lot to be done by us all.

Of course racism and bigotry are wrong. However, as a first generation immigrant from an Iranian & Muslim heritage, I am appalled by the way so many seemingly well-meaning organisations present racism and bigotry as the monopoly of so-called ‘white’ people. This in itself is a staggeringly racist assumption.

Such organisations might gain more credibility among the rational mainstream of society if they recognised that hate, prejudice and supremacism can afflict every ethnic, cultural and religious group.

Today, we have Salafists and other Islamist extremists across Europe “peddling hate” against Christians, Jewuish people, moderate and secular Muslims, atheists, homosexuals and anyone else who doesn’t fit into their narrow and fascistic worldview. Ironically, they do this whilst presenting themselves as ‘victims’ and securing the support of naive ‘anti-racism’ organisations.

I know of a practising Muslim woman who was slandered widely after she fell out with a couple of wealthy people. She was slandered as a terrorist and a tart and an illegal immigrant and the wealthy people were able to use their wealth to get people of her own ethnicity who she did not even know to slander her widely so she was lied about by recent migrants, minority people in debt, criminals from the minorities, etc. Most of these people didn’t even know her.

This woman’s home was bugged by racists under the pretense of watching the terrorist and she was terrorised in her own home with normal things she was saying and doing in her own home being pounced upon and twisted in order to make up lie after lie about her. ( This was a woman with a 30 year exemplary work and school record who went to a top 6 university and was well behaved all her life).

She could not get married and have a normal life and has ended up umarried and jobless at 40 despite going to an ivy league university and doing well at work.

This woman was shunned and made into a pariah owing to this new, sneaky, covert but deadly form of racism and she has suffered terribly physically in recent years and suspects she has been harmed through the NHS and in other ways. She also suspects that people were harming her each time she criticised them even in her own home as she would get sick soon afterwards.

She has the means to prove her innocence and she needs support to clear her name.

What kind of help is there to help this woman?

P.S. If racists are infiltrating and targeting minority people and natives who they have fallen out with through the NHS, this has wider implications for the whole of society so it would be in everyone’s best interests to investigate her case. She has suffered terribly for fifteen years.

Its nice to see that this elitist project is meeting resistance. Im looking forward to see what the future brings. Leave islam and racism at the doorstep, please.

I find it disgusting that someone like Pay Chris abuses the righteous worries about racism to slander a perfectly normal political party like N-VA.

To Peter Holm: Islam has nothing to do with the problems in the world. What is causing problems everywhere are Westerners who incorrectly think their better than non-Westerners. All the conflicts in the world do not eminate from religion, they eminate from self-serving European imperalism.

Dariush Shahanshah Wrote: ‘…I am appalled by the way so many seemingly well-meaning organisations present racism and bigotry as the monopoly of so-called ‘white’ people. This in itself is a staggeringly racist assumption.’ Exactly! In a nutshell you have explained the way naive and usually elitist Middle class organisations operate. I am equally appalled by the usual Middle class assumption, never spoken but heavily inferred, that it’s only White Working class people who are racist and prejudiced. How many prejudiced and racist Middle class people hide behind that convenient smokescreen?