John Grayson uncovers the chaotic and terrifying reality behind official assurances as Covid-19 enters Urban House, continuing his investigation into the treatment of asylum seekers during the pandemic.

Douglas, a professional worker from the Middle East, has spoken to me (through an interpreter) regularly over the past weeks. I met him face to face in a field near Urban House on Saturday 4 July. The Urban House Supporters group from Sheffield were delivering food, toiletries and clothing, and for the first time, masks, to a long line of Urban House residents. ‘John, last week four people were taken by ambulance out of Urban House and were tested. Only one came back. I am sure the three have Covid. Nothing changes in there – still, with my kidney condition, I have to use dirty toilets and showers, there is no social distancing.’ I said I would ring his human rights lawyer, who had been trying to get Douglas out of Urban House for weeks.

Tony was there as well. Tony is a businessman from the Middle East. He told me, ‘John, you remember I went on a hunger strike and refused to take my insulin because they would not give me food from the list my hospital advised. They still will not help me; they laugh at me when I get angry about my diet. I had to go into hospital again and I promised to take my insulin, but I eat very little still.’

The outbreak of Covid-19 in Urban House

A few days later, on Thursday 9 July, a family inside Urban House were confirmed as having the virus. Douglas told me on Friday 10 what was happening.

‘We heard Friday morning, and everyone was very angry and frightened. Many of us went to reception and demanded to know what was happening now. They would not speak to us. One security man shut the main door and just said “No one can go out now, you must all stay here”. Someone brought in masks and hand gel, the first time ever we have had them in Urban House.’

Another resident of Urban House told the Independent on Friday, ‘Everyone is full of fear, stress and anxiety. We’re talking about life or death. In here, there are more than 200 people all living together all day, sharing toilets, and eating areas. There is no respect for anyone.’

‘There is no respect for life,’ he added.

The outbreak – the official version

Outside Urban House the public at large were being told of the outbreak and the strict quarantine being declared by the local health authority. Anna Hartley, Wakefield’s director of public health, confirmed a ‘small outbreak’ had occurred, and told the BBC that the council was ‘continuing to work closely with Mears Group, the Home Office and Public Health England to help limit any further potential spread’.

The council said it would be testing the remaining residents and staff, with measures in place to ‘manage the infection risk’. The Wakefield Express reported that ‘NHS staff continue to provide healthcare to Urban House residents on a daily basis in the same way they have throughout the pandemic’.

What really happened: the dangerous chaos of Friday night

On the afternoon of Friday 10 July, Douglas reported, ‘There were lots of people arriving with cameras. I went out with Tony to talk to them and try to tell them what we thought was going on. Tony collapsed on the road outside with an epileptic fit. They took him to hospital.’

Douglas told me, ‘They are saying they are moving everyone out at 6 tonight.’ After months and months of campaigning, this sounded really good news for people in Urban House. SYMAAG and residents had been calling for its closure and the transfer of people to hotels since early March 2020.

I received a film of the evacuation that evening. Douglas told me, ‘We think between 50 and 60 people went, families and single people. But they did not take really ill people like me or Tony. Many people who went were very fit. Nobody knows why those particular people were sent out.’

It emerged a week later in a Mears statement to the BBC that 84 people were sent to asylum housing in different parts of Yorkshire and the North East on that Friday night. Mears told the BBC, ‘all alternative accommodation had met contractual standards and was “prepared and cleaned prior” to residents moving in’.

I spoke to Gail (through an interpreter) on Saturday. She was in tears. ‘I am pregnant, and this place is filthy. I am frightened, I don’t know whether I am infected from Urban House. I will get infections from this dirty house for my pregnancy. They brought me here with two other women from Urban House to a shared house and there was another woman already living here. I told them I wanted to go near to the father of my child. I am over a hundred miles from him.’

A few days later, I spoke on Zoom to Faith, who told me what had happened to her and her husband when they left Urban House. ‘The Mears transport driver took us up to the North East. We went to three houses. The first was really dirty and had not been prepared. The second one was full of ladders and pots of paint; they were painting it. The third house was dirty, and the fridge was full of mould, but the driver said we had to stay there. By then, it was 2.30 am on Saturday.’

No one amongst the 84 people leaving Urban House on Friday night after the outbreak had been tested for Covid-19. John Taylor, chief operating officer of Mears, told the Home Affairs Committee at their Inquiry on 7 May that Mears had an ‘evolving policy’ on testing and stated that procedures would be in place ‘early next week’.[i] To the best of my knowledge no one was ever tested at Urban House. 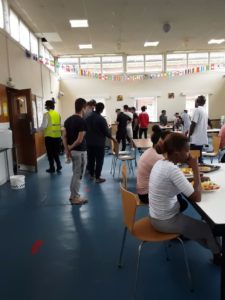 No health cover, no cleaners for the toilets and showers

On Saturday evening Douglas told me, ‘We are all being tested tomorrow by an Army team. The nursing staff have taken the weekend off, as they usually do, and have left us with no health cover. A woman collapsed in the showers. We could only get paracetamol from reception.’

On the evening of Monday 13 July, Zak from South Asia rang to tell me (in perfect English), ‘John, there were no nurses in over the weekend, and no cleaners. The toilets and showers were not cleaned from Friday evening to this morning. Three days after the Covid case, I am still forced to share my room and there is no social distancing in the canteen.’

On Tuesday 14 July, test results were given to residents and 35 people tested positive. They all went to isolation asylum houses.

I was told later by a local support worker in South Shields, ‘Mears told us that they have brought 12 people here to isolation. But they don’t appear to have contacted the local health authorities.’ 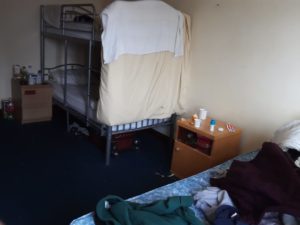 Daniel had been involved in protests about food and conditions in Urban House before the lockdown period. ‘When we went to complain at the Migrant Help office, they made us wait for an hour sometimes. But this was better than what happened after lockdown. Migrant Help staff all left the building and the office was closed. There was nowhere for us to take our complaints … only the Urban House staff and management who we were complaining about.’

Karl, a teacher from the Middle East, told me, ‘After the testing results were given to us on Tuesday 14 July, the four management staff just disappeared. We saw one of them for a couple of days, but they didn’t come back to manage till Monday 20 July. On 18 and 19 July there were no nurses and no management here, just security, reception, and canteen workers.’

On 14 July Wakefield’s public health director told the BBC, ‘We are treating Urban House as one household … in-line with government advice.’ The idea that it would be safe to manage Urban House with 264 residents as one household arguably made the outbreak inevitable. On 7 April Home Office officials and the director of public health visited Urban House and agreed on this strategy. In a letter to me on the 14 April the MP for Wakefield, Imran Ahmad Khan, said he had been assured the policy would work and that:

There never have been any rooms with ensuite bathrooms in Urban House – all residents were forced to share bathrooms, shower rooms and toilets throughout the lockdown period.

Over a hundred people abandoned, still at risk

During that week, over a hundred people were still in Urban House, some of them with asthma, kidney disease, diabetes and elephantiasis.

On Monday 20 July I was outside Urban House, speaking with Douglas, Tony and Karl. Karl said, ‘Mears tell us that everyone will be out of here this week. We don’t believe them.’

Douglas rang me the next day: ‘They have put up a list of people going tomorrow, Wednesday. I am one of the thirty-one. Tony is not on the list.’

Karl rang me on Thursday. ‘There is a list up in reception with six names going tomorrow. They say the rest of us are going next week. Mears lied to us again.

‘There are around ninety of us left two weeks after the outbreak, they have tested us all again, but we are terrified still. They now give us single rooms. One guy went to complain about bed bugs in his room. They refused to do anything, they told him he would soon be out of Urban House.’

All names have been changed in this article.

Thanks to Manuchehr M.D. for all his work and comradeship in my research on Urban House.

This article needs thorough fact checking!
There are many inaccuracies!

Another timely and important article on Urban House and it’s deterioating conditions and treatment of asylum seekers. Mears Group’s as the COMPASS contractors need to be removed and this article also highlights the woefully inadequate oversight and intervention from the local authority and Home Office.
Let’s keep it simple..This place needs to close now!