We are not extremists. We are Sweden

An incisive new campaigning video attacks the equation of anti-racism with extremism.

Human rights defenders connected to Swedish anti-racist group Linje 17 mot rasism (Line 17 Against Racism) have found a novel way of lobbying for change. In a terse film, entitled #viärsverige 2014 – sluta normalisera rasismen! (#WeAreSweden 2014 – Stop Normalising Racism!), of just three minutes (subtitled in English), anti-racists and feminists directly address politicians, journalists, the police and the judiciary. Each campaigner reads a phrase from a carefully-crafted statement. The tone of their staccato-style delivery expresses perfectly their collective determination no longer to submit to frameworks which trivialise life-threatening racist violence and reduce those who resist to cartoon stereotypes of left-wing agitators, ‘troublemakers’ and domestic ‘extremists’. 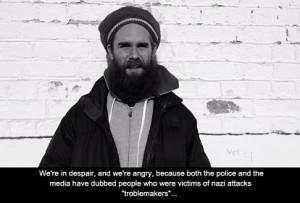 Sweden is in danger of returning to the deadly neo-Nazi violence of the 1990s, when a trade unionist was assassinated, refugee centres were firebombed and many people of migrant origin were murdered. In March this year, Showan Shattak, a prominent campaigner in Football Fans Against Homophobia, was left with life-threatening injuries after a knife attack by neo-Nazis following the International Women’s Day Reclaim the Night demonstration in Malmö. Line 17 Against Racism itself came to national prominence after a terrifying neo-Nazi mob assault on a peaceful community demonstration against racism in the Stockholm neighbourhood of Kärrtorp on 15 December 2013 – an assault initially characterised by the police and the media as a battle between extremists from left and right.

Those who appear in the video include local activists, unknown to the public, and the more celebrated, such as the radical rapper Timbuktu, Gudrun Schyman (former leader of the Left Party, now leader of the Feminist Initiative), the actor and writer Lo Kauppi, and Mona Sahlin, a former leader of the Social Democrats who is herself regularly targeted by the neo-Nazis. 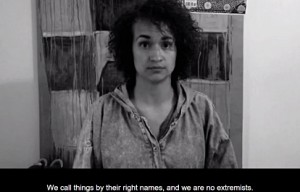 At a time when European counter-extremism policies are in danger of reducing anti-racism and anti-fascism to another form of extremism, Line 17 Against Racism should be congratulated for its incisive action and for drawing such a clear line in the sand.