‘Who Polices The Police?’

Ken Fero, director of Who Polices The Police?, discusses the making of the film that examines the complicity of state institutions in deaths in custody and the struggle of one family for justice.

Nearly a year ago, an inquest jury at Southwark Coroner’s Court gave a damning verdict about the death of Sean Rigg in Brixton Police Station back on 21 August 2008. The jury of ordinary citizens were highly critical stating that the police failures to respond to initial 999 calls were ’unacceptable and inappropriate‘ and that the ’level of force used on Sean Rigg whilst he was restrained was unsuitable‘. In fact it had emerged during the inquest that Sean had been restrained in the prone position for at least eight minutes and that this had contributed to his death. The jury in its narrative verdict described the police actions on that day as ‘questionable’ and ‘inadequate’. The jury vindicated the family’s belief that the police restraint and neglect had caused Sean’s death.

The very manner of the death, exposed by the CCTV footage of the custody ’cage’ which showed the last desperate minutes of Sean’s life, was shocking. The impact of the jury verdict, and the disturbing evidence that had emerged, has since led to a series of inquires. Criminal charges against some of the officers ‘are being considered’. For a brief period, at the time, the name of Sean Rigg became widely known, just as the names of Azelle Rodney and Jimmy Mubenga are current today. Will there be more inquiries leading to more recommendations? Is there a pattern here that we should be aware of? Let’s look at some figures. Since the Independent Police Complaints Commission (IPCC) went into operation over eight years ago they have investigated 827 such deaths. The number of successful prosecutions of police officers for these deaths is 0. Yes, not a single successful prosecution by the Crown Prosecution Service (CPS) who must base their case on the evidence gathered by the IPCC. 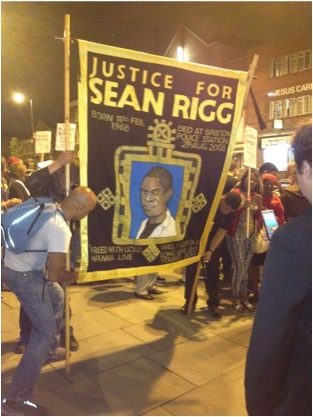 It’s no wonder that the families are forced to start justice campaigns when faced with these odds. I have been asked many times why I decided to make a film about Sean Rigg. The answer is simple – it was impossible not to. I have a history of making films with a collective called Migrant Media and all of those films follow the struggles of families and communities against injustice and human rights abuses. In 2001, we released a feature documentary called ‘Injustice’ that looked at the deaths of a number of young black men in police custody. The film became very controversial when police officers attempted to suppress it, claiming it was libellous and eventually, after a long battle, the film made an international breakthrough when CNN picked up the story. Injustice went onto a cinema release, won many festival prizes and helped to force a reform of the investigation process into custody deaths. Since then we have been filming a follow up to Injustice, which is due for completion next year. But the Rigg case demanded a film of its own, purely because of the resilient campaign that Sean’s family undertook for justice. After spending some time investigating the IPCC it became clear to us that the organisation has utterly failed in its duty in the Rigg case. The question is why?

Without going into great detail, the IPCC investigation was shoddy to say the least. Incompetence, or perhaps complicity, led to fatal errors in the investigation, too numerous to mention. The initial involvement of the IPCC was to put out a press statement – later retracted after complaints from the family – that Sean had died in Kings College Hospital and had only passed through the police station. In August last year, four years after Sean’s death, this attempt at deflection ended in public humiliation for the IPCC when the jury took the unprecedented step of striking out the hospital name from the record. Instead they marked down the place of death as ‘Brixton Police Station’ – that was clear to anybody who saw the CCTV footage of Sean’s life ebbing away as he lay on the custody cage floor with the boots of police officers surrounding him. The damning inquest verdict was only possible because of analysis of endless hours of CCTV footage by Sean’s siblings Wayne, Samantha and Marcia. The inquest exposed the actions, and ensuing lies, of the police officers involved in this horrific case because of the tenaciousness of the Riggs and their legal team, led by barrister Leslie Thomas and solicitor Daniel Machover. During the inquest it emerged that police officers had openly lied in court and, in March this year, two police officers and one retired police officer were arrested on suspicion of perjury and of perverting the course of justice. The three are out on bail and time will tell if they will be charged and put on trial. Whether there will be any further charges to officers in relation to Sean’s brutal death also remains to be seen, but, if it had been left in the hands of the IPCC, this case would have been closed long ago.

Who Polices The Police? raises deep questions about the proximity between the IPCC and the police but it also offers some answers. When people watch the film they are shocked at how poor the IPCC investigation into Sean’s death was, but sadly this is very typical. The IPCC was formed after the PCA (Police Complaints Authority) had been thoroughly discredited because of a lack of independence in its investigating of police misconduct and wrongdoing. The Rigg case is one of many others we have filmed since 2003. In its early days the IPCC indicated that there were to be some improvements but these were minimal and the situation today is that the IPCC is untenable. The answer as to whether it is worth saving and how it should function rests in the hands of the Rigg family and the families of many hundreds of others that have died since the IPCC was created. My perspective on what is needed is that, whatever its name and whoever staffs it, the organisation must be able to undertake robust and rigorous investigations. After all, in these cases, we are dealing with the most serious abuses of power by police officers, and they need to be dealt with in a proper manner. Officers that commit serious crimes need to receive serious punishment, including going to jail. This is a minimum requirement for the bereaved and will also bring about a reduction in custody deaths. There can be no more effective deterrent than a prison cell to a police officer that uses violence instead of using his brain. The current ‘get out of jail’ card that officers carry in their pocket needs to be taken out of the equation.

Over the five years since Sean’s death, and while we were making the film, the family of Sean Rigg became investigators because the IPCC failed to do the job. It cannot be right when members of the public are forced to undertake the role that state bodies like the IPCC is tasked to do. The families of those that die in police custody simply want a proper investigation in the way that we all would if somebody we knew died. But because the police are implicated, involved and – in some cases – responsible for these deaths, the rules change, collusion seeps in and evidence is tainted. It’s clear that there are many people in the community that could do a more thorough job than the existing IPCC commissioners and investigators.

There has been a very sustained period of criticism of the IPCC from its handling of the investigation into the shooting of Jean Charles de Menezes in 2005 to the more recent shooting of Mark Duggan. Currently there are a number of reviews, internal and external, of the IPCC partly brought on by the Rigg inquest which exposed what amounts to criminal negligence in its handling of the Rigg investigation. The new IPCC head, Anne Owers, has gone on the offensive, but it’s unclear to what purpose. Evidence is being gathered and many individuals and lobbying groups are making submissions. In May of this year Dr Silvia Casale led a review of the IPCC investigation into Sean’s death and made seventeen recommendations. The most glaring criticism of all being the simple fact that the IPCC had utterly failed to carry out a robust and independent investigation – in other words, to do its duty. The IPCC has entered a period of chronic public and political scrutiny brought on by its own unforgivable lack of vigour and an inability to perform its functions in an independent manner. In the meantime deaths in police custody, and their investigations, are continuing under its remit.

Who Polices The Police? is an investigation of the Rigg case but it’s also a much wider exploration of the issues involved, and the use of experimental techniques and poetry allow a more personal, and political response. The film is now making a contribution to a much larger debate and a number of media organisations have been forced to wake up and look at this as state crime. As Sean’s brother Wayne Rigg reflects in the film, “If a police officer commits fraud or does something like that they may end up going to prison, but when it comes to someone dying in their custody it seems like whatever agencies are involved – the CPS, the IPCC – the government, the state does everything they can to cover it up because, who protects them? The police protect them, so they protect the police.” After almost five years of campaigning, the family of Sean Rigg are beginning to get the justice they have been demanding. Time will tell just how far the state will go in giving them the justice that they deserve.

Who Polices The Police? can be seen at the Migrant Media film site here

Ken Fero is a documentary filmmaker and activist. He is a Senior Lecturer in Media Production at Coventry University and Visiting Research Fellow at the Centre for Cultural Studies in Goldsmith’s College, London.