Who will defend the space to protest?

An insightful TNI discussion paper is a must read for anti-racist and social justice campaigners.

Are you working for a human rights NGO or part of a social justice movement and are you worried about increasing restrictions, overt political interference and government de-legitimisation of your work? A short pithy discussion paper, the result of a workshop organised by the Transnational Institute (TNI) in Amsterdam, gives an excellent overview of a range of laws and policies that have emerged from a global trend, amongst governments and donors alike, of securitisation and repression.

The report revolves around a critique of the concept of ‘shrinking space’ – both a metaphor to describe a gamut of restrictions on political struggle and an intellectual framework for Civil Society Organisations (CSOs) to start a discussion about their problematic relationship with governance, both domestic, EU and international. This report, co-authored by activists with experience in organisations like Statewatch, The Electronic Intifada, War Resisters International, Forest Peoples’ Programme and the Association for Women’s Rights in Development, acknowledges that there is a big difference (in terms of access to power) between highly-professionalised NGOs, whose ‘space’ at a policy-level might be shrinking and social movements /community-based groups which are overtly threatened by policies that de-legitimise and criminalise. In a nutshell, not everyone’s space is shrinking in the same way. 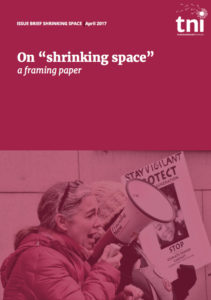 Having laid out the problem, the report then provides a grid explaining ten interrelated trends that constrain civil society: from government-imposed funding constraints on NGOs to intimidation from far-right actors; from direct attacks on the right to protest to laws that criminalise refugee solidarity; from risk aversion and securitisation on the part of public and private civil society donors to the capture of spaces traditionally inhabited by CSOs by private interest groups, lobbyists and GONGOs (Government-oriented NGOs).

A discussion paper like this, is, by its nature, brief, so there is no panoramic overview here or detailed case studies of all the groups affected by repression and securitisation on the ground. But that’s what makes the paper fascinating. It’s up to you to join the dots! Time and again, examples of groups impacted by the ten inter-related trends jump out. In the UK, Muslim charities and those fighting for Palestinian rights face the impact of onerous registration, licensing and accounting obligations imposed by the Charity Commission. In Hungary, NGOs funded by the Open Society now find themselves treated as ‘traitors’ and subject to new regulations governing foreign grants and donations. And across Europe, the criminalisation, stigmatisation and de-legitimisation of human rights defenders has, in the context, of refugee solidarity, led to the criminalisation of activists from MedMenneskeSmuglerne, No Borders, Roya Citoyenne, Proem-Aid, Shorda Crew & ADM and Team Humanity − to name but a few. When it comes to the report’s identification of the problematic category of GONGOs, it’s up to readers to decide which organisations the neologism applies too. As someone involved in campaigns against racism and fascism over the last thirty years, some of the recent hastily-constructed, incredibly well-funded hate crime and counter-radicalisation quangos spring to mind.

The briefing paper ends with a rallying cry for cooperation and solidarity across civil society against state tactics that isolate and criminalise. This is a timely, thoughtful and informative read that provides fresh insights into a danger that has intensified under the corporate modes of governance associated with neoliberalism. It should be widely read.

Read about it here

IRR News: Spanish fire-fighters who saved lives at sea must not be criminalised