Will a sanitised history be launched with Mayflower 400?

Danny Reilly of the newly formed Mayflower Mavericks Campaign examines emerging issues around the plans to celebrate the 400th anniversary in 2020 of the pilgrims’ voyage to the US in Plymouth. 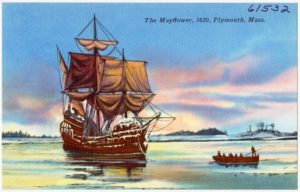 In the autumn of 1620 the ship Mayflower, with 102 passengers, landed in North America and started the colonisation of the area that became known as New England. The Mayflower passengers landed in a region where the Sachem [paramount chief] of the local Wampanoag Nation was Massasoit, who subsequently helped them survive In the autumn of 1676, the ship Seaflower set sail from New England with a ‘cargo’ of Indigenous American slaves bound for the English Caribbean colonies.[1]

The pattern of settlement and war established by the thousands of English colonists in New England in the seventeenth century involved the use of ‘irregular’ forces, who received part payment by selling captives as slaves.

Though the story of what happened in the years 1620-1676 is part of the Mayflower story, the 400-year anniversary commemoration committee in the UK seems to have overlooked it. Despite years of planning, the colonial background and context is so far absent from either the revamped Mayflower Museum, Plymouth, or the extensive collection of worksheets to be found on the education section of the Mayflower 400 website. Yet a Mayflower writing competition for schools has already been started by the Plymouth based Community Investment Company (CIC), the Real Ideas Organisation (RIO). 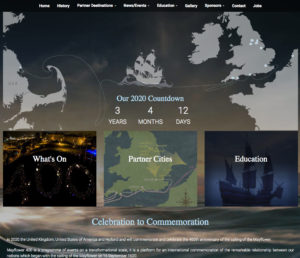 The story so far

‘Every child in Plymouth will know the story of the Mayflower’ (Plymouth Council Scrutiny committee, 16 March 2016)

In recent weeks the commemorations have received widespread publicity and local and national government support, but the organisers show no signs of amending the highly selective educational aspects of Mayflower 400. In response, a small group, Mayflower Mavericks, at present based only in the south-west of England, has launched a campaigning website[3] to argue the need for the inclusion of materials about the impact of colonialism, slavery and the dramatic losses of Indigenous and African American lives and cultures that occurred both prior to and after the landing in 1620.

But the commemorations are not just about history. These de-contextualised education materials have been launched at a time when Indigenous American organisations are campaigning over water and land rights and there are also campaigns over commemorations, such as Columbus Day. Indeed, the history of recent related commemorations could provide lessons for the Mayflower ones. The text of a plaque on Cole’s Hill, Plymouth in Massachusetts is revealing:

Since 1970, Native Americans have gathered at noon on Cole’s Hill in Plymouth to commemorate a National Day of Mourning on the US Thanksgiving holiday. Many Native Americans do not celebrate the arrival of the Pilgrims and other European settlers. To them, Thanksgiving Day is a reminder of the genocide of millions of their people, the theft of their lands, and the relentless assault on their culture. Participants in a National Day of Mourning honor Native ancestors and the struggles of Native peoples to survive today. It is a day of remembrance and spiritual connection as well as a protest of the racism and oppression which Native Americans continue to experience.

A work in progress? 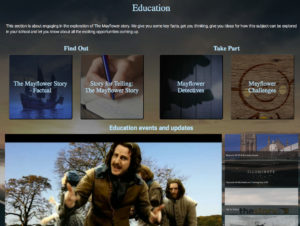 ‘We can look forward to an international programme of activities in 2020 that does justice to the vision and fortitude of those 102 brave pilgrims and their powerful legacy of freedom and democracy embedded around the world today.’ (Adrian Vinken, Chairman Mayflower 400)

Though plans for further education projects have yet to be spelt out in detail, the ongoing promotion of an ideological education programme centred around a sanitised version of the ‘Mayflower Story’ is extremely worrying. Moreover, we do know that the Mayflower 400 commemorations are planning a ‘Mayflower exhibition’ to be hosted in the History Centre currently being built. It will open in 2020 and has been designed to ’embed the Mayflower story as a core narrative in the city’s history’. Also planned for 2020 is a ‘Plymouth International History festival … [which] … will provide a grass-roots led celebration of Plymouth’s Mayflower heritage.’

The selection of materials to tell the histories of the British Isles and the USA which neglects colonialism, slavery and genocide should not be acceptable. Consequently, the first blog on the Mayflower Mavericks’ website is a series of questions directed at the Mayflower 400 organisers.

The good news is that there is nearly three years left to produce some new Mayflower materials.

Below are brief outlines of other historical events, aspects and themes that the ‘Mayflower Story’ could include:

You can read more about suggested educational topics here and the latest about the Mayflower Mavericks Campaign here.

Finally, Cole Porter’s lyrics to his 1934 hit ‘Anything Goes’ are telling and could also be used in educational materials.

And we’ve often rewound the clock

Since the Puritans got a shock

When they landed on Plymouth Rock

Any shock they should try to stem

‘Stead of landing on Plymouth Rock,

Plymouth Rock would land on them.’

Thank you for bringing such to my attention as I did live in Devon between 1976 to 2001 and visit Plymouth more recently with my family, including my two sons (currently 11 & 14 years of age) who will now be made more aware of the city’s background.
Graham Riches, FCII

DECOLONIZATION OF ‘LITTLE ENGLANDERS’ IS THE BURNING QUESTION. AND THE ABOVE NARRATIVE GOES A LONG WAY TO REKINDLE SOULS LOST IN THE MIRAGE OF PROJECT EMPIRE 2.0

Perhaps if most of the white middle class people on here just admitted they are working slowly, surely and very very carefully to turn poor black people and Asian people against white working class people, under the guise of identity politics, it would be actually the most honest thing any of you have written for year. Pathologically ignoring class discrimination and the growing economic divisions between working class and middle class, essentially says that the well to do middle class ‘left liberals’ couldn’t care less about the plight of millions of people if they’re white. Racist it isn’t, ignorant, bigoted and amoral it certainly is.

A diverse and honest history is what we should seek